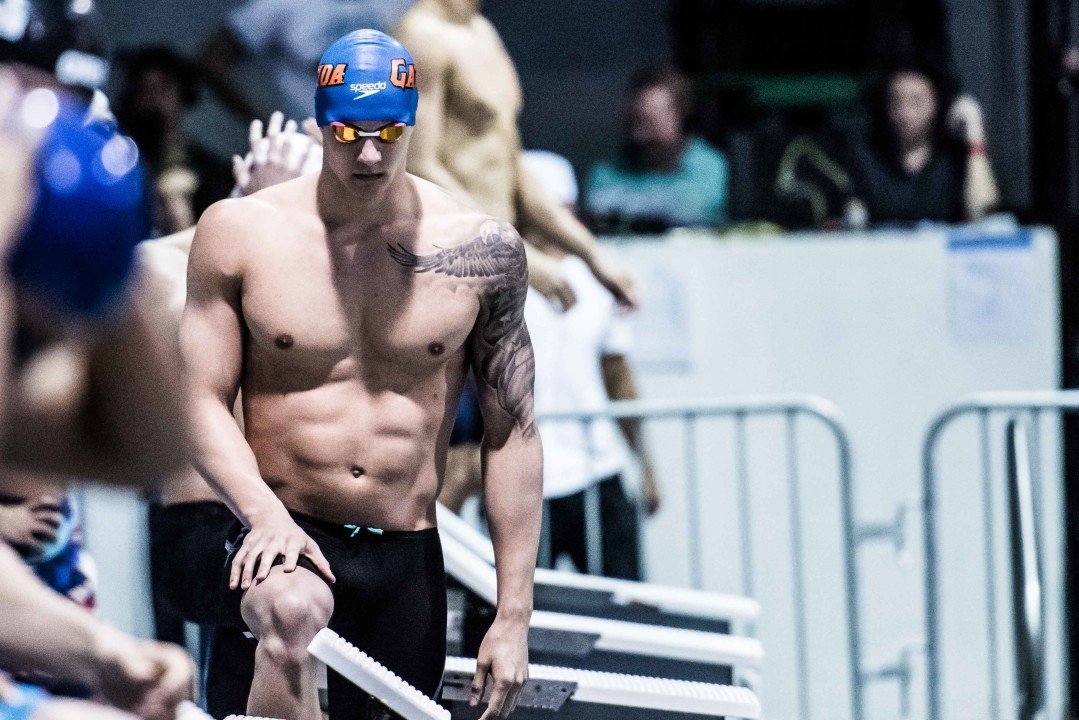 Caeleb Dressel will hunt down the NCAA title along with Vlad Morozov's NCAA record in the 100 freestyle. Archive photo via Mike Lewis/Ola Vista Photography 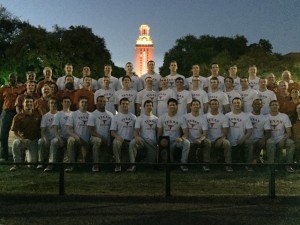 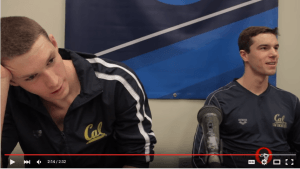 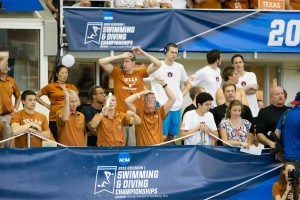 Florida sophomore Caeleb Dressel will look to redeem himself in the 100 freestyle this year. He set the pool on fire last year, winning the 50 at NCAAs and coming just 0.01 off the American record, but he missed the final in the 100 after a successful swim at SECs where he was 2nd behind eventual NCAA champ Kristian Gkolomeev. After Dressel’s jaw dropping 18.23 50 freestyle at SECs it was expected we’d see him throw down a big personal best in the 100, and he did, as he swam his three fastest times ever  including winning in a new American record of 41.07, making him the clear favorite heading into NCAAs. Dressel added time from SECs to NCAAs last year in the 100, and there is speculation he may do so again as the main concentration of the meet will be scoring points rather than throwing down best times, but Dressel still comes in 0.52 seconds ahead of the next fastest this year, making him the odds on favorite. How much rest Dressel receives will be a key factor in determining whether or not he adds time from SECs or if he takes a run at Vlad Morozov’s NCAA record of 40.76 from 2013.

NC State is quickly becoming a sprinting hotbed in the NCAA, and their two front men this year are senior Simonas Bilis and sophomore Ryan Held. Last year at NCAAs Bilis swam a personal best of 41.94 to claim 2nd place behind Kristian Gkolomeev, but he has already dipped below that mark twice this year. Bilis went a personal best 41.77 in the prelims at the ACC Championships, and followed up with another best time of 41.76 leading off the 400 free relay. Despite falling to teammate Held in the final, Bilis is a serious contender and will look for another top-3 placing. He took off a bit of time from ACCs to NCAAs last year, so look for him to drop some more time at the big meet and challenge #1 seed Dressel, defending champ Gkolomeev and teammate Held for the title. Held has also been on fire this year, throwing down a massive best time of 41.69 at ACCs on his way to the title. After a 14th place finish last year, Held looks primed to fight it out for the title with the best of them. His swim at ACCs took a whopping 0.75 off of his best time, and the rest of his meet was an all around lights out performance, including a 18.16 50 free split, 18.92 flat start swim and a 1:32.9 200. Will Held be able to recreate his unreal performance from conference to NCAAs? That remains to be seen. Last year he dropped about a tenth from one meet to the next, so we’ll soon find out. After back-to-back years of disqualifications, if NC State can pull out the win in the 200 free relay early in the meet, something they were capable of in 2014 (DQed in prelims) and something they initially did last year before the DQ in the final, Bilis and Held will gain a lot of momentum heading into the rest of the meet.

After getting a taste of the NCAA Championships in relays in his freshman year, last year Mizzou’s Michael Chadwick had a breakout meet, including a 5th place finish in the 100 freestyle. His clocking of 42.29 was a best time, but he has eclipsed that time on three occasions this season. Chadwick posted a 41.89 in November, and was 41.96 at SECs to give him a 2nd place finish behind Caeleb Dressel. Chadwick dropped a significant amount of time from SECs to NCAAs last season, so expect him to drop some more this year. As one of four men under 42 this season, Chadwick can’t be overlooked and will be right there. Like Dressel, Chadwick is a proven long course performer (48.87 100 free), and has a legitimate shot at making the US Olympic team in the 400 free relay and an outside shot at the 100 free. The question for all swimmers with a chance at the Olympic team is will they fully taper for NCAAs, or will they save something extra for Trials? It will be interesting to see how everything plays out, but for now put Chadwick down for a 41-something.

Defending champion Kristian Gkolomeev hasn’t been as on as he was last year, so he’s far from a favorite to defend his title, but certainly isn’t someone who should be counted out. After placing 13th in his freshman year, he exploded for SEC and NCAA titles last year, posting times of 41.68 and 41.56 respectively. His best time this year was a 42.67 from SECs where he was knocked down to 4th, so we’ll have to see whether he can get back into the 41s at NCAAs. I think he has the experience under his belt to get him through to the final, but I don’t see him matching up with the likes of Caeleb Dressel when the lights are on.

After the big names, there are plenty of guys capable of making some noise. Sophomores Brett Ringgold of Texas, Peter Holoda of Auburn, and Blake Pieroni of Indiana have all posted very quick times this season and will be contenders. Ringgold popped a big best time of 42.04 in December, and was right on the mark again on his way to the Big 12 title clocking a 42.08. With those swims, Ringgold looks like a good bet to be sub-42 later this month. Holoda has posted his five best ever 100 free swims this season, including a personal best 42.23 at the SEC Championships where he finished 3rd. Holoda swam about the same time from SECs to NCAAs last season, so expect him to be in the same ballpark as the 42.23 he sits with now, and he’ll need to be in order to make the championship final. Pieroni has taken off in sophomore season, including winning the Big Ten title in both the 100 and 200 free in February. Pieroni comes in ranked 7th after his 42.27 at Big Ten’s, but everyone should be on high alert for him as he could sneak into one of the top spots as he threw down a 41.64 anchor leg on the 400 free relay.

Others to keep an eye out for will be John Murray of Texas who was an A-finalist last year, Joe Bonk who is another elite NC State sprinter, and Wisconsin junior Cannon Clifton.

Dark Horse: Indiana junior Anze Tavcar had his fastest two 100 freestyles ever at the Big Ten Championships, including a big personal best time of 42.58 that placed him 2nd behind his teammate Blake Pieroni. If Tavcar can execute in the prelims and take off a bit more time, he could find his way into the A-final. His Indiana teammate Ali Khalafalla will also be dangerous.

Ryan Hoffer to NCAA field, “Its all about the underwaters.”

No kidding, eh? Dressel, too, though it would be awesome to see them head-to-head in a SCY pool now that Hoffer has caught up physically.

True, but we are coming into long course season now so we won’t hear much from Hoffer until next fall.

Full disclosure, huge Texas homer here. But been following the squad closely this year, and I like Ringgold and Murray to both make the A final. Not to beat Dressel, but I think both will go 41 in prelims. Eddie blamed himself for not resting Murray enough last year after his 19.0 and 41.7 in 2014. He also specifically predicted at Big 12s that Ringgold would do really well to be close to his personal bests, which is precisely what Brett did. Murray drops huge time when tapered, but has still swum well this year. Makes me think both guys are right on target. Ellis made an A final in at least one of the sprint freestyle races in 2014… Read more »

I honestley could see Billis and Held going one and two in the 100 free. Their is something brewing down in Raleigh and these guys are both going explode over the next few year. Also pretty sure that Billis did not fully taper and shave for ACCs so Im am expecting him to drop many time.

Sure….if we assume dressel gets DQ’d. That seems entirely reasonable. Now let’s deal with reality where everyone will be eating dressels by bubbles.