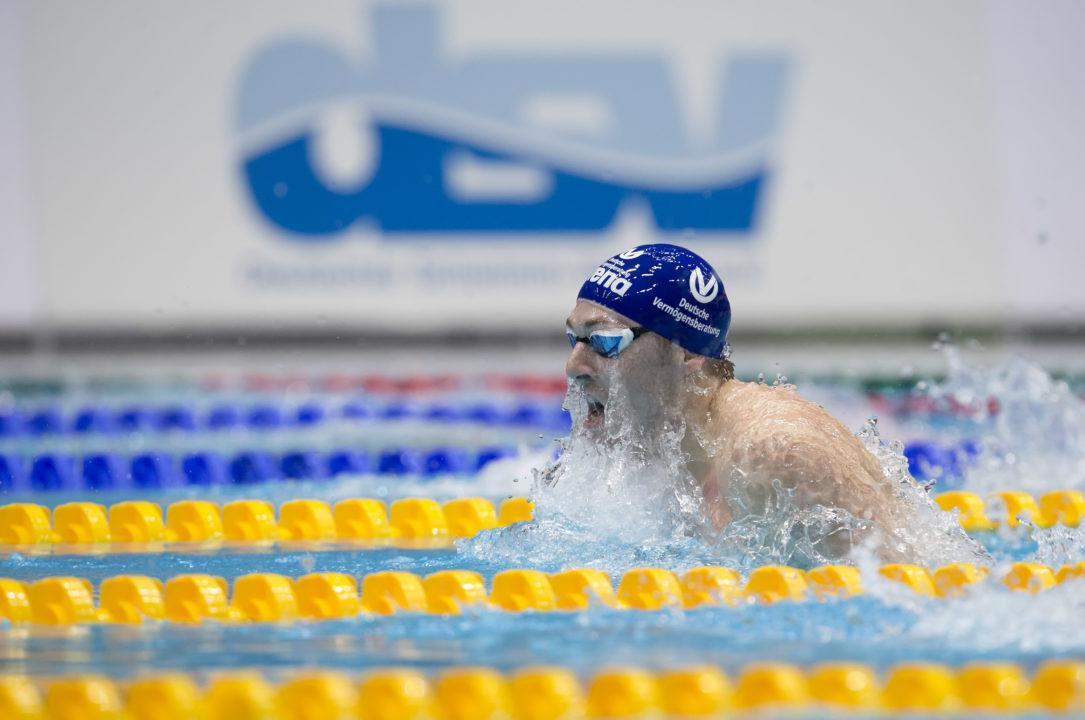 Franziska Hentke touched first in the first heat in 58,77. That is exactly the prelims cut time. Her teammate at the SC Magdeburg Aliena Schmidtke took the second heat in 58,48. Best time of the morning: Alexandra Wenk, third heat, clocked a 57,76 – NEW GERMAN NATIONAL RECORD. This girl is on fire!

Marius Kusch, SG Stadtwerke München, won the first heat in 52,31. He also swam under nomination cut in the 100 m free prelims yesterday but finished only 8th in the 100 free final. Philip Heintz clocked a 51,84 – very fast morning swim for the 2016 German Champion in the 200 m IM. And Steffen Deibler reached in for the win in the third heat in 52,38 – that is exactly the prelims nomination standard.

In first came in the first heat Anna Dietterle in 25,43.

Dorothea Brandt made it under the prelims cut in 24,83 – an early morning statement, also under finals cut.

Christian vom Lehn clocked a 2:12,02 for the win in the first heat. Max Pilger touched the wall first in the next heat in 2:13,24. World Champion Marco Koch clocked a 2:12,51 – this is slower than prelims nomination standard but he only had to finish first or second in the final tonight at this Championships because he won the gold medal in this event in Kazan.

Michelle Lambert won the first heat in 2:32,40. In first came Jessica Steiger in heat 2 in 2:29,00. In the next heat, we have Malin Grosse on lane 5 – she is Born in 2002, one of the most promising youngsters in Germany.
Vanessa Grimberg set a new personal best time yesterday in the 100 m breaststroke. She is the clear favorite here, only swimme who could swim faster than the prelims standard time: She finished in 2:28,40 followed by Malin Grosse in 2:34,24.

Marco Di Carli set a 55,46 in the first heat. Christian Diener missed the prelims standard time in 54,47. Jan-Philip Glania posted a 54,06 and is the only man who made the German prelims Rio cut.

Björn Hornikel finished first in heat 1 in 22,36. Till Barthel is the fastest swimmer in the next heat in 22,78. And a NEW GERMAN RECORD: Damian Wierling in 21,81. What a race by the 20-year old German sprint star!

Deibler had an infection four weeks ago and the same infection like Heidtman earlier this week. Pretty sad, but it doesn’t look good for him at the moment.

Yes, i dont think that he will qualify. I also dont think that Kusch will qualify, in my opinion it will be Heintz or no one. I would be very happy if Kusch would qualify. Heintz in my opinion will be allowed to swim 100 fly, unless both Kusch and Deibler will qualify. Deibler would have to finish 1st (to qualify for the medley relay) or swim the required time and finish top 2. I think the final will be slower than the prelims and i dont see Deibler breaking 52s, i wouldnt be surprised to see him miss out on Rio. In general a lot of older athletes (Mensing, Feldwehr, Deibler) have been rather disappointing, while many younger athletes… Read more »

In general, there are the same rules for the 4×200 as for 4×100. As far as I know, for the relays, there are no such strict rules as for the solo events. But Lambertz tries to avoid to to take athletes only for one relay if possible. That’s one reason why di Carli is not safe yet, besides the fact that he has to swim a fast 100 free at the German Open. If Deibler qualifies for Rio, Lambertz may say he doesn’t need di Carli. The same applies to Gose, but there is another Probem: The JEM is at the same time as the German Open. Gose would have to resign on some good medal chances with probably small… Read more »

I think something is wrong with the live timing?
21.81 for Wierling? THAT CAN NOT BE TRUE!
It would be a huge new PB (previous one was 22.49) and a new german record …

Old german record was 21.86 by Rafed El-Masri from 2008.
I always though that this would be one of the most “unbreakable” german records, right behind mens 200/400 free (World records by Biedermann), womens 50/100 free (World records by Steffen) and womens 400 IM (4:36.10 by Schneider back from 1982). The 400 IM record doesnt seem to be out of reach for Hentke, but the other too will remain german records for a very long time.
I hope that Wierling will be able to swim again sub 22 tonight, i dont think that he can improve his time tonight. I think it was the right decision for him to not swim the 200 free today …