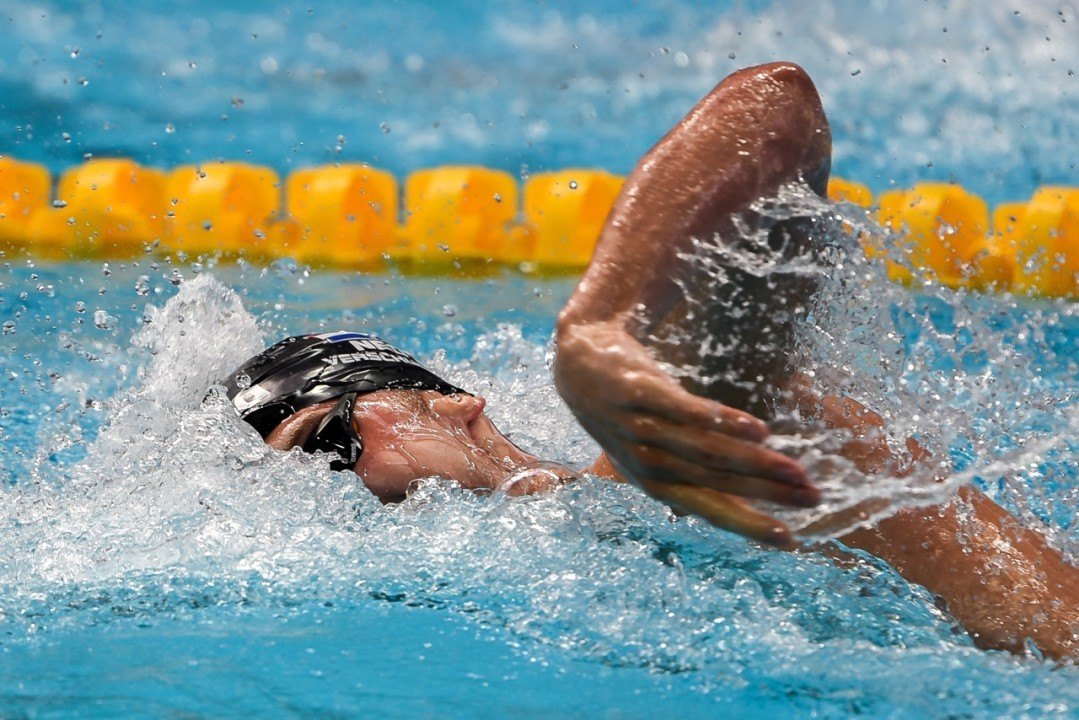 Sebastiaan Verschuren leads the men's 100m freestyle field in Eindhoven, clocking the only sub-49-second mark of the field this morning. Archive photo via Peter Sukenik/www.petersukenik.com

It was a fairly quiet morning in Eindhoven, with 7 events contested across both swimming and para-swimming. The women got off to a rocky start in the women’s 400m IM event, whereby just one participant swimming under the 5-minute mark.

Serbia’s Anja Crevar, just 15 years old, touched in 4:52.49 to set herself up as the #1 seed for finals. Crevar earned 5th place at last summer’s World Junior Championships, clocking a lifetime best of 4:43.36 in the process.

The women’s 200m freestyle picked up a bit, with Robin Neumann dipping under the 2-minute threshold right off the bat, setting herself up for the middle of the pool lane in a mark of 1:58.51. Today’s swim is the first time Neumann has registered a time beneath 1:59, so we’ll have to see tonight if she has enough left in the tank to put herself on top of the podium.

Two females gunning for the gold, however, are Andrea Kneppers and Marrit Steenbergen. Kneppers, who swims for the University of Louisville, earned the 3rd seed after today’s prelims, finishing in a time of 2:00.43. However, Kneppers led off her Dutch squad’s 800m freestyle relay yesterday in a swift 1:58.60, clearing the FINA A standard of 1:58.96, so she’s proven she can get into elite territory.

For Steenbergen, the young phenom swam a pedestrian 2:01.41 after scoring a lead-off of her own yesterday of 1:57.91, a personal best by over a second. Her budding career’s fastest time heading into the meet was the 1:58.99 she threw down in Baku, so the fact she’s on fire here should signal the sprint alarm for all other competitors.

The highlight for the men came in the form of the 100m freestyle race, where Dutch native Sebastiaan Verschuren touched in 48.65 for the fastest time of the morning. Verschuren, whose personal best checks in at 47.88 from London, was the only sub-49 swimmer of the morning, followed by Hong Kong’s Geoffrey Cheah over a second behind. Cheah, who trains stateside with the Club Wolverine Elite squad in Ann Arbor, earned a time of 49.95 this morning.

Cheah actually took the race out faster than Verschuren in an opening 50 of 23.64 to the Dutchman’s 23.78, so Cheah either ran out of steam or simply backed off, saving fuel for tonight’s semi.

Serbia’s Velimir Stjepanovic was also in this morning’s race, snatching up the 4th seed in a mark of 50.03.