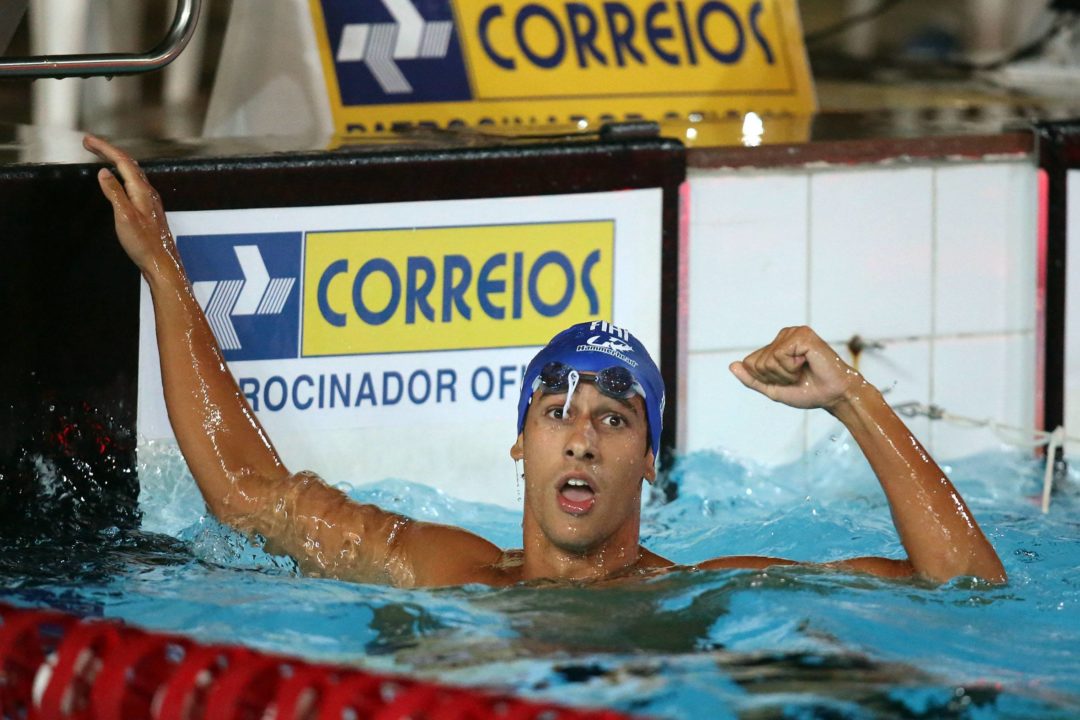 July 4th is the kickoff of the major international meets of summer 2015, with the World University Games opening competition in South Korea.

We’ll be here every step of the way, with event-by-event recaps of all the action all week long.

You can also check out our @SwimSwamLive Twitter handle for to-the-second results from Gwangju.

Keep refreshing this page for event-by-event recaps of the first prelims session.

Three guys got under 8 minutes to lead the field in the opening event, with Great Britain’s Jay Lelliott well ahead of the crowd.

Lelliott dominated the final heat, going 7:55.81 to jump inside the top 20 in the world for the year. One heat earlier, American Janardan Burns and Ukranian Sergii Frolov battled for the win, with Burns just touching first, 7:59.06 to 7:59.88.

They’ll be the top three seeds into finals, which won’t take place until tomorrow night.

(Though the meet results page lists Australia’s Holly Barratt as the top qualifier, it doesn’t appear Barratt swam this event.)

China’s Lu Ying will be the frontrunner in the women’s 50 fly heading into semifinals. Her 26.55 won the final heat and outpaced all challengers by a tenth. Russia’s Svetlana Chimrova is her closest threat at the moment, going 26.66, and just a tick behind was Canadian and Denver Pioneer Sam Corea, who went 26.68 after a breakout NCAA season.

The top American will be fourth-seeded Felicia Lee, who won her heat with a 26.76. The Stanford grad was one of eight swimmers under 27 seconds. Slovakia’s Katarina Listopadova is a hundredth back at 26.77.

Americans won back-to-back heats of the 100 back and were sitting first and third in the standings when Japan’s Junya Hasegawa ripped off one of the better races of the morning, a 54.27 to take over top billing by over half a second.

Hasegawa passed up Jack Conger‘s 54.86 for that spot, and the two will lead the two semifinals tonight.

Also getting under 55 was Italy’s Christopher Ciccarese at 54.98. He jumped ahead of Conger’s teammate Jacob Pebley (55.17) for third.

Japan and Italy will also have two men qualified for semfinals, with Yuma Edo going 55.26 and Matteo Milli 55.49, respectively. Great Britain’s Joe Patching, an Auburn Tiger in the NCAA, was 55.50 and will also compete for a spot in the final.

American Sarah Henry roared through the back half of the final heat to take the heat win and the top prelims time in the 400 IM. The Texas A&M grad was 4:39.62 and leads by almost two full seconds over the field.

Things should get interesting in tonight’s final, though, as the next bunch of athletes qualified very close in time, especially considering the 400 IM is infamous for the prelims gamesmanship it often requires, with athletes conserving energy in prelims and only doing what they need to to make the final.

Prior to Henry’s heat, the top seed was Barbora Zavadova of the Czech Republic in 4:41.40. She’s followed very closely by the second American, Georgia’s Hali Flickinger, at 4:41.48.

There isn’t a nation in the world right now deeper and stronger in men’s breaststroke than Great Britain, and the reign continued through prelims of the 100 breast. Craig Benson took the top spot at 1:00.46, nearly a half-second up on the field. That’s a new season-best for Benson, and should move him to 21st in the world ranks for this year.

Behind that trio, this looks like an extremely close event heading into the semifinals. Places 4 through 16 are separated by less than .9 seconds.

The American contingent only got one swimmer into semis – Ohio State’s DJ MacDonald, who sits 12th in 1:01.79.

The women’s 200 back is set up to be an outstanding race, with the top two seeds into semifinals separated by just one one-hundredth of a second. American Lisa Bratton won heat 2 and her time held up for the top qualifying position at 2:11.97. It didn’t come without drama, though, as Japan’s Yuka Kawayoke won the very next heat in 2:11.98. They’ll lead their respective semifinals tonight.

The other heat win went to American Melanie Klaren, and she’ll be the third seed at 2:12.10.

Also placing two swimmers highly were the Canadians, who got fourth with Genevieve Cantin (2:12.87) and sixth with Barbara Rojas-Jardin, who has been training through a diabetes diagnosis and has just started to return to major competition.

In between the two is Japan’s second swimmer, Miki Takahashi, who went 2:13.19.

Brazil’s Henrique Martins paced the final individual event of prelims, saving one of the session’s best swims for last. Martins matched his season-best with a 23.38, a time that already ranked 9th in the world for the year:

He sits just .02 out of 4th in the world. Martins will be the prohibitive favorite to win if nothing changes in a major way during semifinals – he leads the field by four tenths of a second.

Russia swept the next two spots, with Oleg Kostin swimming his second race of the night and going 23.89. His teammate Aleksandr Sadovnikov was 23.91 for fifth.

After them came a pair of Americans – Division II standout Matt Josa was 23.95, the last man under 24, and incoming Cal freshman Andrew Seliskar went 24.05 to tie for 7th with China’s Shi Yang.

The United States took off with the top qualifying spot in the 400 free relay, besting all other qualifiers by well over three seconds. Their time was 3:40.04, though it’s likely most teams will be quite a bit faster in the final, when they can push the relay exchanges a bit more.

That U.S. roster was made up of Lia Neal, Maddie Locus, Elizabeth Pelton and Felicia Lee, according to the World University Games website, though individual splits weren’t available. That’s a team bookended by Stanford teammates, with representatives from the last two NCAA Championship programs (Locus from Georgia and Pelton from Cal) in the middle.

From there, things tightened up considerably. Russia nipped Japan for the second seed, 3:43.55 to 3:43.61. Russia’s team featured exciting youngster Rozaliya Nasretdinova on the second leg (though splits were also unavailable), and Japan was led by a 55.87 leadoff split from Yui Yamane.

The American men followed suit, going 3:17.79 to roll away with the top seed. That time included a great 48.71 split from the second leg – the World University Games website lists Paul Powers, Michael Wynalda, Clay Youngquist and John Murray in that order, which might suggest the 48-second split came from Wynalda, though that’s still unclear.

That’s a team of two Michigan Wolverines and two Texas Longhorns for the Americans.

Russia sits fourth in 3:20.58 after finishing just behind those two teams in their heat. Italy won the early heat in 3:20.97 to sit fifth overall.

Live stream is usually available at livefisu.tv
You have to log in and then you can watch any sport and event.

Unfortunately it looks like there’s absolutely no live stream anywhere for me. 🙁
It’s live at 6 AM EST on ESPN 3 in USA. But no access here in France.

Wow! 😯
On the WUGs’ website, in the men’s 100 breast results, they mention the world record holder Cameron van der Burgh as American! 😆 😆 😆 😆
http://www.gwangju2015.com/IRS/eng/sw/engsw_swimming_results_m_100m_breaststroke_m031_9_09.htm
Huge addition for the US team! 😆
No coincidence he changed his nationality today.
Today is July 4th!

By the way CVDB isn’t the WR holder anymore.

Hopefully I can find a live stream for the finals
2 years ago we could watch that meet live.

Very disappointed by Vissering’s elimination in the 100 breast prelims. Very bad performance in 1.02.50. It’s clear he’s not rested for that meet. His best time of the year is 1.01.00. He keeps his best for the US nationals. Then why swim in South Korea?