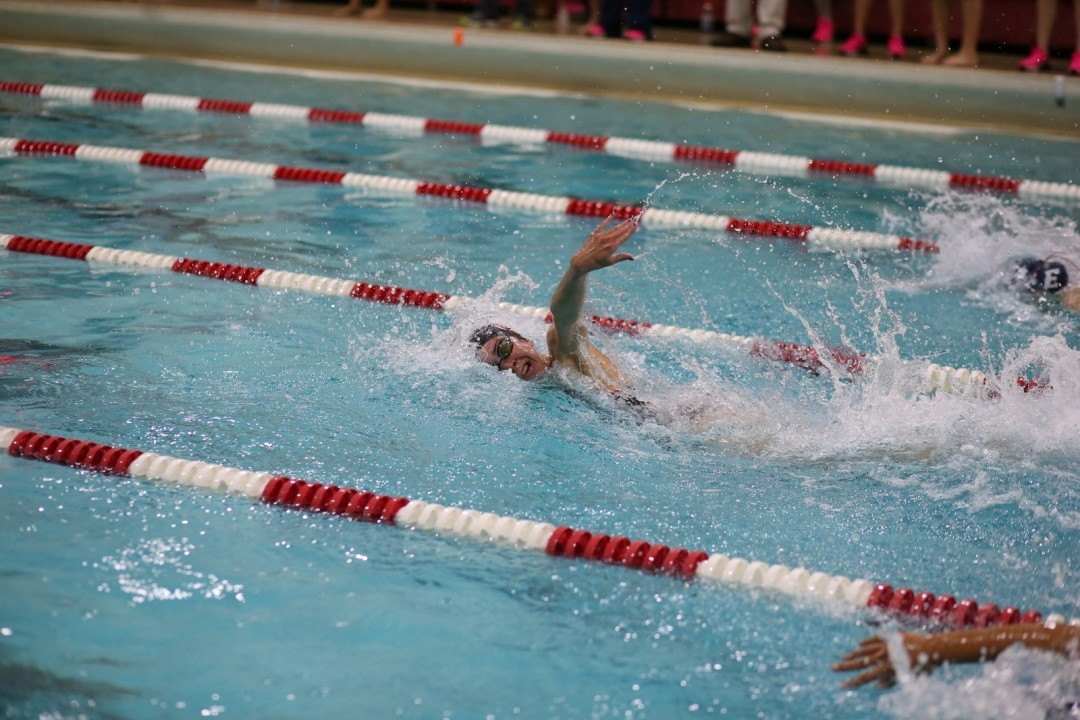 The women's Ivy League championships begin on Thursday in Cambridge, Mass. Cornell's Jenna Immormino (pictured) is one of the favorites in the sprint freestyle events.

The women’s Ivy League championship meet has been dominated by Princeton and Harvard for most of its existence, with the exception of a four-year stretch of Brown team titles from 1996-1999. Since 2000, Princeton has won 11 championships and Harvard 4, including two of the last three. This could be the year that marks the end of the Princeton-Harvard hegemony; Yale has the stars and the depth finally to overtake their Ivy rivals. Since taking over Yale’s women’s team, head coach Jim Henry has done an outstanding job assembling the kind of depth it takes to challenge the perennial winners. However, the Bulldogs, like the Tigers and the rest of the Ancient Eight, have to contend with Harvard’s home pool advantage, not an insignificant 12th-man factor when the scores are as close as they are predicted to be.

The 2014 Women’ Ivy League Championship was an exciting meet; it was the first time the championship meet had been held in speedy Katherine Moran Coleman Aquatics Center at Brown and there were pool records produced in nearly every event. Only one meet record fell, however: then-senior Shelby Fortin of Penn won the 200 free in record-breaking time.

Dartmouth  –  Kendy Nangle (junior, free/back), Charlotte Kamai (junior, sprint free), AnnClaire MacArt (freshman, free), Olivia Samson (junior, free), Taylor Yamahata (freshman, fly/back). The Big Green lost several point-scorers to graduation and hasn’t really recovered its momentum. The class of 2016 continues to provide most of the firepower for Dartmouth, but there have been a couple of bright spots in the freshman class, including MacArt and Yamahata.

Harvard  –  Georgie Enoch (freshman, breast/IM), Danielle Lee (junior, free/back/fly), Sherry Liu (junior, distance free), Stephanie Ferrell (senior, breast/IM), Kristina Li (freshman, back/fly), Kendall Crawford (junior, back/fly). The Crimson have the most depth of all the Ivies. They have more top-three seeds than anyone else, and they overwhelmingly dominate the backstroke events and medley relays. The defending Ivy champions will be swimming in front of their home crowd and will be tough to beat.

Penn  –  Rochelle Dong (sophomore, free/fly), Ellie Grimes (sophomore, IM), Meagan Dollard (freshman, free), Taylor Sneed (senior, back/fly), Virginia Burns (freshman, fly/free). Penn now has the kind of depth it takes to move up in the rankings at the conference meet. It is unlikely the Quakers will compete with the Big Three this year but they could very well finish fourth, if they have the kind of meet they have the potential to swim.

200 IM – All but one of last year’s “A” finalists are back again this year, and there are new additions to the mix as well. Harvard has three of the top eight seeds, including Geordie Enoch, with the fastest time in the Ivy League so far, and Stephanie Ferrell. Yale boasts four of the League’s top times, including Sydney Hirschi and freshmen Danielle Liu and Paulina Kaminski. However, Princeton landed four in that championship final last year, including Sada Stewart, Beverly Nguyen, and Olivia Chan. It will be everyone’s first swim of the meet so they will all be shooting for sharp prelims swims.

100 fly – Columbia’s Christina Ray comes in with the top time, but freshmen Elsa Welshofer of Princeton and Maddy Zimmerman of Yale aren’t far off. 2014 champion Nikki Larson of Princeton will be looking to defend her title, and Rochelle Dong of Penn is a contender as well.

100 free – Most of the 2014 championship finalists are the top-seeded entrants into this event. Kina Zhou of Yale, Kate Dillione from Brown, Cornell’s Jenna Immormino, Penn’s Rochelle Dong, Princeton’s Claire McIlmail and Nikki Larson, and Harvard’s Victoria Chan all have a legitimate shot at the title this year.

Nice summary, thank you. I very much appreciate the color-coded comments providing us with swimmers to watch and some of potential showdowns. I expect the swimming portion of the meet to be close, but Harvard has the divers to keep the title.