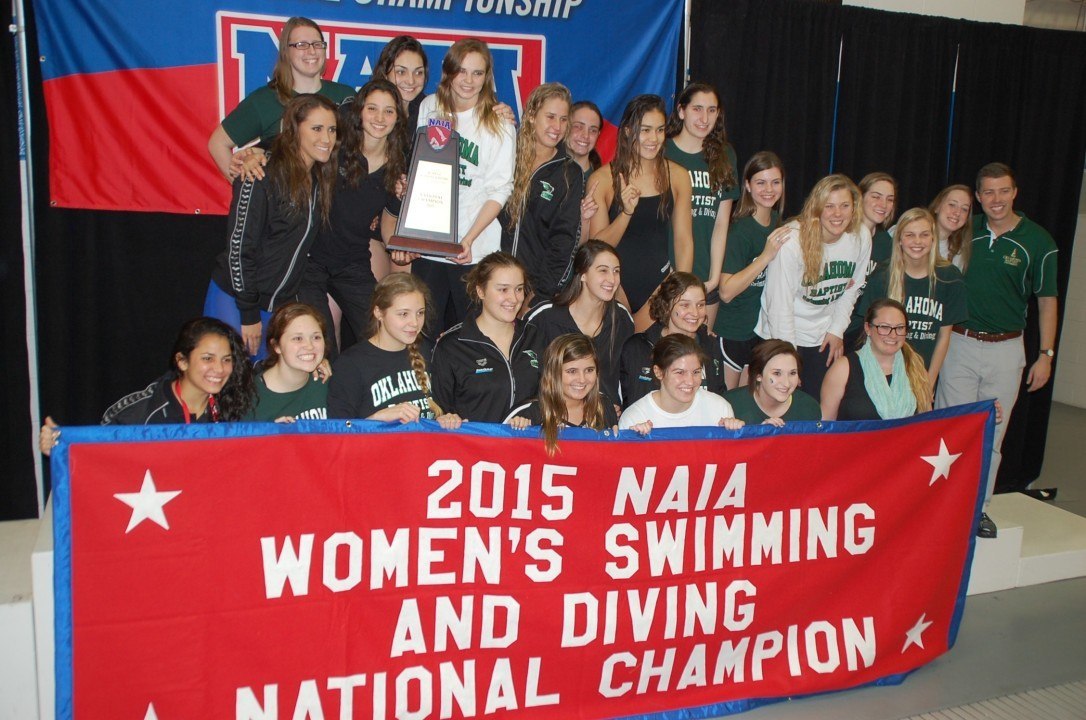 The women of Oklahoma Baptist won their third team title in a row, closing out the 2015 NAIA National Swimming and Diving Championships with 731 points. The Bison are the only team in the meet with a full roster and divers, so it’s never really a contest. If there was any excitement to this year’s championship it was the back-and-forth races for second place between SCAD and Brenau, and for fourth among Concordia University of Irvine, University of the Cumberlands, and Olivet Nazarene, that only the coaches were ever aware of.

Brenau got off to a good start and led through the first three events but SCAD outscored Brenau by 19 in the 50 free and closed out Day One ahead by a 13-point margin. Brenau had a very strong Day Two, especially in finals where they picked up 8 points from prelims, while the Bees lost 12. The Golden Tigers had reduced SCAD’s lead to 8 by the end of Day Two, and it could have been anyone’s game on Day Three. SCAD started Saturday with a bang, qualifying 6 up/2 down to Brenau’s 2 up/6 down. In the mile, Brenau won the event and added 34 points to their total, but three SCAD distance swimmers finished in the top eight and thus erased Brenau’s advantage. The Golden Tigers performed even better than expected in the 200 back and 200 breast, narrowing the margin to 2 points after each of those two events. But SCAD had 3 up/1 down in the 200 fly, and that made all the difference. With a 38-point lead heading into the 400 free relay, the Bees could DFS and still take home the runner-up team trophy. They didn’t, of course; the SCAD quartet rocketed to a second-place finish with a school record, and the Bees closed out the meet 42 points outside of Brenau’s reach.

The CUI / Cumberlands / ONU battle was even more intense. Interestingly, CUI and Cumberlands are two of the only three NAIA women’s programs with diving teams. Without those extra points, it might have been a different story in the race for fourth. And yet, even though 88% of the teams in this meet had no divers, this is still a swimming and diving championship so every point counts. The three teams shuffled back and forth, trading leads after every event. Cumberlands finished Day One slightly ahead. On Day Two, ONU took over the lead after the 4IM, then traded back and forth with CUI over the rest of the day. CUI was up by 4 headed into Day Three. ONU outscored both opponents in each of the swimming events, but diving points were tallied just before the final relay, and now ONU was the third of the trio, trailing CUI by 19 and Cumberlands by 5. ONU dropped 5 full seconds from their morning relay but fell .19 short of finishing fourth, which would have given them a 1-point margin over Cumberlands. Instead, they lost by 17 to CUI and by 1 to Cumberlands.

Defending champion Laura Galarza of OBU completed her sprint free trifecta with a 49.63 victory in the 100 free. Her teammate Emma Forbes-Milne posted a 50.81 to touch out Biola’s Lisa Tixier (50.91) for third.

OBU’s Kerryn Mullin made it a 100/200 breaststroke sweep with a 2:19.83 blowout of the field in the final. Brenau’s Mary Katherine Jabbia (2:24.29) touched second, narrowly beating Kendra Monnin of West Virginia University Institute of Technolgy (2:24.87).

Rounding out the 1-meter final were Dominique Seghezzi and Haley McVay of Concordia and Lydia Kellar and Skylar Underwood of OBU.