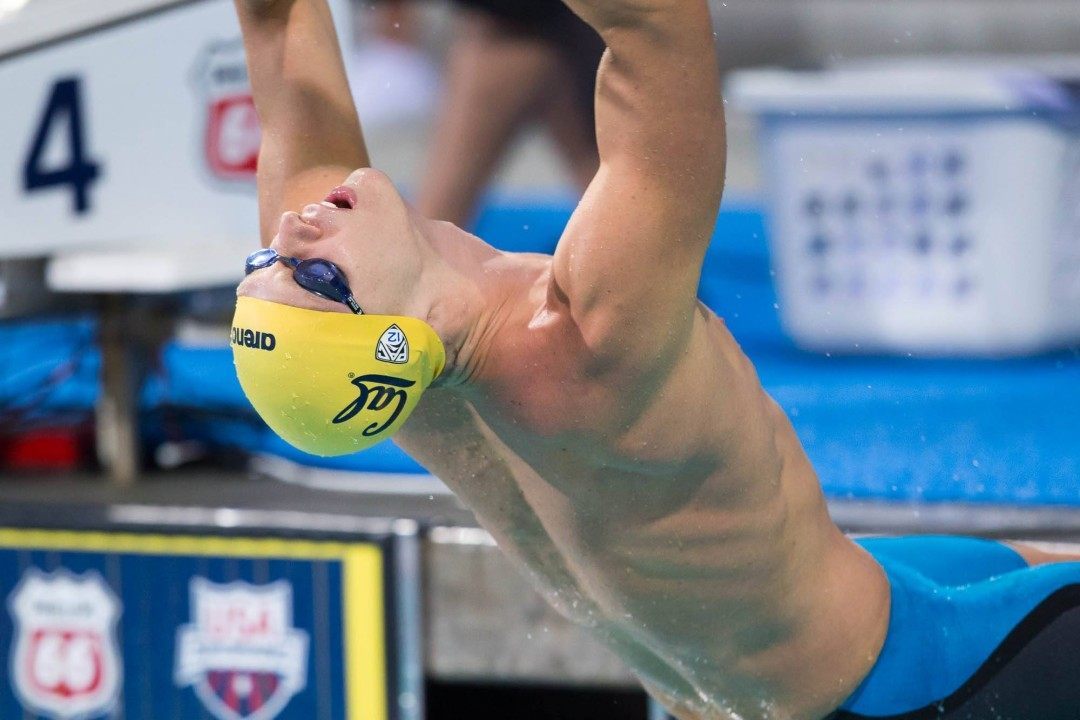 Ryan Murphy sits atop the country in this event this year, and he isn't too far from the 1:36.81 American record set back in 2007 by Mr. Lochte. Archive photo via Tim Binning/TheSwimPictures.com

Ryan Murphy, defending champion and the future of American backstroke, went right by Tyler Clary‘s NCAA record of 1:37.58 last year with a 1:37.35 to light up the pool and take the title by well over a full second. His seed time this year is a 1:38.34, and all eyes are on Ryan Lochte‘s American and U.S. Open records from all the way back in 2007. He went into last year’s meet with a 1:39.21, and his current seed time is nearly a full second ahead of where he was in 2014.

While Murphy is expected to have an incredible swim here, there is plenty of talent in tow. Of the 29 invited swimmers, fourteen have notched ‘A’ cuts already this season, and names like David Nolan, Drew teDuits, and Jacob Pebley are still very relevant.

Nolan, whose biggest performance of the year came in the 200 IM, where he finally was able to make big improvements from high school and took down Lochte’s American record, has been edged out of a 200 back title since his freshman year. He touched 2nd in 2012 and 2013 and then 3rd last year. His seed time this year (1:40.05) is the fastest he’s been in season prior to the big meet, and although it’s not by much, he’s clearly having the best season of his life (at least in his IM). How he does in his events early on in the meet will impact the degree to which is attacks this race, and if he goes in on a high note, he has potential to blow past his personal best.

TeDuits rocketed to a NCAA title in 2013 after not even swimming in the event as a freshman in 2012, then fell to a tie for 30th in prelims last year. However, this year, he’s back to rocking it after posting some pretty impressive dual meet times. Although he’s been really unpredictable over the course of his NCAA career, he’s seeded 4th at 1:39.72, and we like how he’s looked this year. The Badger should be a worthy contender for the next best behind Murphy at the big meet.

Pebley was heavily recruited in high school, and proved he was the real deal with a 3rd place finish in this event followed by a 4th place finish last year, posting 1:39 mids both times. He’s only been 1:40.48 this season, but that’s almost exactly where he’s been the past two seasons going into NCAAs. Nolan, teDuits, and Pebley have been here before, and the three look solid to at least make the A final.

The 2nd seed, however, belongs to Hennessey Stuart of the NC State Wolfpack. Who, you ask? Stuart, a freshman, came into the NCAA with a best time of 1:42.75. That’s a pretty darn fast time for a high schooler, but he had yet to go under 1:43 before the ACC Championships. It was there that he exploded for a 1:39.73 in prelims to break the conference record, following up with an even faster time (1:39.37) in finals to break the record again. Considering the way that NC State, as a team, has performed well at NCAAs in recent years, it’ll be interesting to see what he can put together.

Sean Lehane went from 11th his freshman year to 7th last year. The Tennessee junior is seeded 3rd (1:39.65) and is part of the group of swimmers above that will be chasing Murphy. Possible contenders for the last few spots in the A final are sophomores Carter Griffin (Missouri) and Joe Patching (Auburn) along with Stanford freshman Patrick Conaton. Griffin didn’t make either final last year, but comes in as the #6 seed at 1:40.17. Patching touched at 11th last year in 1:40.67, and he comes in at #7 this year with a 1:40.46. That’s about a half second faster than Patching’s seed time last year, while Griffin is coming in way faster than his 1:41.67 seed time last year. Conaton wasn’t on many radars until the Pac 12 Champs this year, when he time trialed a 1:40.48, blowing away his previous best of 1:44.64, a time he hadn’t matched at the Art Adamson Invite.

Dark Horse: Grigory Tarasevich (Louisville). The sophomore placed 18th in this event last year, just missing the B final, though he is seeded 12th this year. Hennessey Stuart stole the show at the ACC Championships with a furious 1:39.37 in finals, while Tarasevich finished in 2nd in 1:40.86. The Cardinals had a great meet at ACCs, and the 200s of stroke might be considered to be the program’s biggest strength.

John Murray is another swimmer whose been on the rise. I think he can win this one.

Long term prediction, Murphy will be a 1:35 mid before his time in college is done

At the rate Patrick Conaton is dropping (he dropped 4.2 seconds this year) he’ll be a 1:27.8 his senior year. Incredible.

I’m not sure why you need to be sarcastic. A 1.8 second drop in 3 years is pretty tame when you think about it

Lots of imposters hanging out in this thread, it looks like

This is why we can’t have nice things.

On Saturday, with the meet on the line, Murphy and Pebley are going to be beastly in this event.

This is a strong point. But would also apply to the argument for Darmody and Glass sneaking in… and neither will be over swum…

I would imagine Murphy is looking at 14 races this weekend… Pebley may swim a preliminary 400 medley relay to rest Murphy but he’ll be good to go here.

But Glass won’t sniff a relay I don’t think. He’s going to be SUPER ready. and Darmody is probably only going to swim one session of the medleys thanks to he Texas depth, and he’s a bubble freestyle relay guy… so he won’t be over raced at this point either.

The grind of the meet is a huge factor. And one of the main reasons I… Read more »

While I agree Stanford has to use Nolan as much as they can, he still posts incredible times. it does not matter whether or not he drops time, he is still one of the best. He will drop time (like he has in the past after Pac12- though not huge amounts) in all his events and splits, will only win the 200IM, top three in the backstokes, relays no idea how well they will do A/B wise (though if I had to bet I would say B for most of them)

^Stop pretending to be Bobo. There’s only one true Bobo.

Sam, I’m just saying that 11 or 12 races in, I’m not betting on Nolan to beat Murphy. In a nationals setting where he’s focused on a few swims… maybe. But he’s not going 1:37 low or 1:36 high with his schedule this weekend.

Troll…. Ryan’s “sluggish” would even be enough to get him top 8.

My predictions have Ryan Murphy in 17th, after a sluggish morning swim.

This is one event that Cal has a chance to get a leg up on Texas, IF they can hold off Darmody and Glass
my picks:
1. Murphy
2. Teduits
3. Nolan
4. Lehane
5. Pebley
6. Patching

Dark Horse: Kip Darmody
Darmody has layed low all season but don’t let that fool you, I think he is ready to make some noise in his last Collegiate meet ESPECIALLY if things are close on the last day

The Iowa pool has eight lanes

Fine, if it makes you happy
7. Tarasevich
8. Stuart

Glass and Darmody should score

Score, yes… sure thing A final? Eh… again, it wouldn’t surprise me…