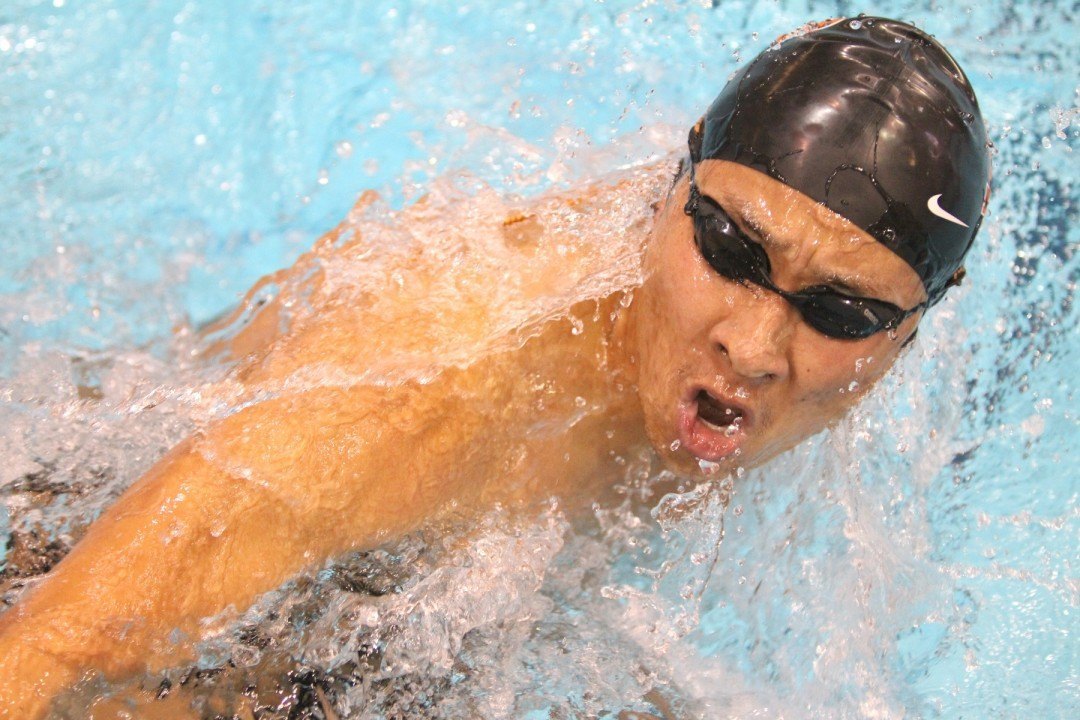 Corey Okubo (pictured above) and the Tigers are hosting the 2015 Ivy League Championships beginning Thursday, February 26, at DeNunzio Pool. It's going to be another close race between Princeton and Harvard this year. Follow along with us on @swimswamlive Archive photo via Beverly Schaefer/ Princeton Athletics

The Men’s Ivy League championship meet has been dominated by Princeton and Harvard for most of its existence, and it doesn’t look like 2015 will be the year that changes. You have to go back to 1972 to find a winner in anything but an Orange & Black or Crimson uniform at the top of the standings, and that includes all those years that Penn State, Pitt, Syracuse, Army, Navy and others were in the championship meet. Since 1973, Princeton has won 20 of the titles, and Harvard, 21.

Although both Penn and Yale have been beefing up their rosters in recent years, they still don’t have the depth to compete with the two leaders. At least not this year. Moreover, Penn has no divers listed on the psych sheet; as good as their swimmers have been this year (they have already broken school records in the 200 free, 1650 free, 200 back, 400 IM, and 800 free relay), you don’t win a conference championship on swimming alone. Yale, meanwhile, has developed an excellent distance program but lacks depth at the shorter end of the spectrum. The Bulldogs should challenge the Quakers for third; Yale should pick up points in back and fly, whereas Penn should outscore Yale in breast and the sprint frees.

Cornell  –  Dylan Sali (sophomore, back/IM), Victor Luo (junior, breast), Tim Satterthwaite (senior, sprint free), Eric May (senior, breast), Ryan Sharkey (freshman, distance), Brandon Sweezer (freshman, distance). The Big Red, under head coach Joe Lucia, has made great strides over the last couple of seasons. The freshman class, in particular, has added excellent depth to the lineup and could be instrumental in keeping Brown and Dartmouth at bay. Cornell may be one or two superstars short of challenging Columbia this year, but the Lions will graduate a great deal of its points this year so 2016 Ivies could be a whole different story for Cornell.

Harvard  –  Mike Mosca (senior, diving), Griffin Schumacher (senior, free), Spenser Goodman (senior, free), Aly Khalik Abdel (sophomore, distance), Eric Ronda (sophomore, breast), Jacob Luna (junior, fly/IM), Jack Manchester (sophomore, back/IM). The Crimson have a ton of depth. Last year Harvard had five “A” finalists in the 200 free, four each in the 50 free and 100 free, and three in the 500 free. They also dominate diving and won 4 of the 5 relays. If the other seven can keep Harvard from loading up like that again, it will be an exciting meet. If not, Harvard will be a tough squad to beat this year.

Penn  –  Chris Swanson (junior, distance), Eric Schultz (junior, sprint), Kyle Yu (junior, breast), Bobby Francis (junior, breast/IM), Grant Proctor (sophomore, IM/back), Taylor Uselis (freshman, distance). Penn has become the go-to place for distance freestylers in recent years, but they also have strong sprinters and get good points in medley relays, as well. Swanson, who finished 9th in the 1650 at NCAAs last year, could win all three distance events. The question is whether or not he will be swimming through this meet, given that he already has his “A” cut. On the other hand, Penn entered no divers into the meet; it seems unlikely that head coach Mike Schnur’s 18 swimmers have the depth to compete with Princeton and Harvard, so the best they can hope for is third.

Princeton  –  Corey Okubo (freshman, IM/back/fly), Teo D’Alessandro (junior, IM/free), Sam Smiddy (sophomore, IM/free), Michael Manhard (senior, diving), Connor Maher (senior, back/free), Sandy Bole (junior, free), Byron Sanborn (junior, breast/IM), Andrew Helber (junior, back). The only team with the depth it takes to challenge Harvard is Princeton. The Tigers have traditionally loaded up the IM finals and tend to do quite well in back and fly, but in the past they have lost ground in distance free. Head coach Rob Orr, who notched his 300th win this season, has a knack for getting the most out of his swimmers and divers. Unlike many of the other teams at Ivies, Princeton did not have a mid-season “fast” meet, plus the Tigers are playing in front of their home crowd, so we could see some impressive drops. They will have to execute flawlessly to defeat a slightly-stronger Crimson squad, but the women’s team just showed it could be done, so the gauntlet has been thrown down to the men.

Yale  –  Brian Hogan (junior, distance), Kei Hyogo (freshman, free/IM), Rob Harder (senior, free/back), Alwin Firmansyah (senior, fly), Andrew Heymann (senior, breast), James McNelis (junior, diving), Ben Lerude (sophomore, distance). Head coach Tim Wise has amassed a great deal of talent, and are especially performant in distance freestyle. They have had just a little less depth on the bench than Penn, and that could be the case again this year. Columbia usually does a good job of outperforming their psych sheet seedings, but we think Yale still has enough depth to hold onto fourth, and with some really stellar performances, could even challenge Penn for third.

200 IM – Five of the top eight from last year are back again, and will be challenged by both the new freshmen, eager to win on Day One; and more seasoned veterans. The returning 2014 “A” finalists include 1-2-3 finishers from Princeton, Teo D’Alessandro, Marco Bove, and Byron Sanborn, as well as Harvard’s Jack Manchester and Yale’s Alwin Firmansyah. We expect to see them challenged by Corey Okubo and Liam Karas of Princeton, Yale’s Kei Hyogo, Dylan Sali of Cornell, Christian Yeager of Harvard, Grant Proctor of Penn, and Dartmouth’s Aaron Athanas, all of whom have similar seed times.

100 fly – With Brown’s Glenn gone, the field is wide open. Columbia’s David Jakl has been inching his way closer to the top every year, and as the top senior in the group he will likely want it the most. Harvard’s Steven Tan, Max Yakubovich and Jacob Luna won’t make it easy for him, nor will Jeffrey Strausser of Brown, Yale’s Alwin Firmansyah, and Princeton’s Ben Schafer and Michael Strand.

100 breast – Another event that has opened up thanks to the graduation of its dominant point-winner (Nejc Zupan of Dartmouth) is the breast. A whole slew of contenders come in with similar seed times, so the jockeying for position, especially in prelims, will be fierce. Any of these could come out on top this year: Eric Ronda or Shane McNamara of Harvard; Princeton’s Jack Pohlmann, Byron Sanborn or Brett Usinger; Penn’s Cole Hurwitz, Kyle Yu, or Bobby Francis; or Andrew Heymann of Yale.

You shouldnt count Columbia out. They have defeated Princeton this year and David Jakl looks impressive

1….2…..3….Columbia has now officially been counted out as has Yale and the rest of the Ancient Eight except for Princeton and Harvard. Yes on paper Harvard looks like the favorite…HOWEVER…for the first time in many years Princeton did not rest/shave most of the team for a mid-season meet (Orr taking a page from the Murphy/Troy book?)…… Princeton drops lots of time as the ageless Orr proves that he is open to changing up his season plan based on the players on hand. It comes down to the relays and the advantages of sleeping at home, eating at home and performing at home is too much as the Princeton relays are the difference in this meet. Princeton wins in a meet… Read more »

Except Princeton did rest their top guys for winter nationals. They had less than impressive performances. Should be a good meet this weekend.

That is incorrect actually, they were unrested and swimming through the meet. I expect big drops from all Princeton guys as they should have a small advantage swimming at home. Going to be a close and exciting meet!

At Nationals I swear I saw the Princeton men in drag suits with the “old lady at the Y” flower caps and snorkeling style goggles on.

No mention for Zach Buerger in the 2 fly? A star for sure

No idea why they did not mention him… He was apart of the class of 2018 that was ranked 5th in the nation this year.

As a Stanford parent, I would like to propose a change to this list. Yale, led by a extremely strong class of seniors, has received a plethora of even better freshmen and could be a huge threat in the Ivy League. Just 2 weeks after suffering from pneumonia, freshman, Kei Hyogo posted a time of 9:03 in the 1000 yard freestyle against Columbia, untapered and without a suit. Was that Kei Hyogo or was that Sun Yang?! Hyogo, joined by Bell, Nee, Rutter and Kao (AKA the 15th best recruited class in the country) will undoubtedly put Yale in striking range. And let’s not forget the Commander in Chief of this team, Tim Wise. The man who coached the Ivy… Read more »

Awesome insight, especially the beginning of paragraph 2. And now the rest of us are wondering if one of the Yale swimmers has a sibling at Stanford. Or maybe your child used to swim in the Ivy league and now swims for Stanford. In any case, I’ll be rooting for Stanford women this weekend and the men next weekend.

I think Princeton gets the tight win over Harvard. As for third, it’s hard to see how Penn can match up with Yale this year. Yale lost two contributors from last year’s team who contributed 28 points. Penn lost a huge contributor from last year’s team, Worster, and Porter, Lyons, Haley, and Hu don’t seem to be on the psych sheets. These guys accounted for 161 individual points and Worster was a key contributor to 4 relays. Penn seems to have only three freshmen on their roster and only one who is seeded in the top 8. Yale has 4 freshmen on their Ivy team. Yale hasn’t rested and shaved yet so I’d expect big drops from their swimmers. Yale… Read more »

Now this guy knows what he is talking about. Completely agree with your predictions. Columbia has had some great relays this year in speeods, and I would love to see them battle harvard or princeton for at least one of the relay titles.