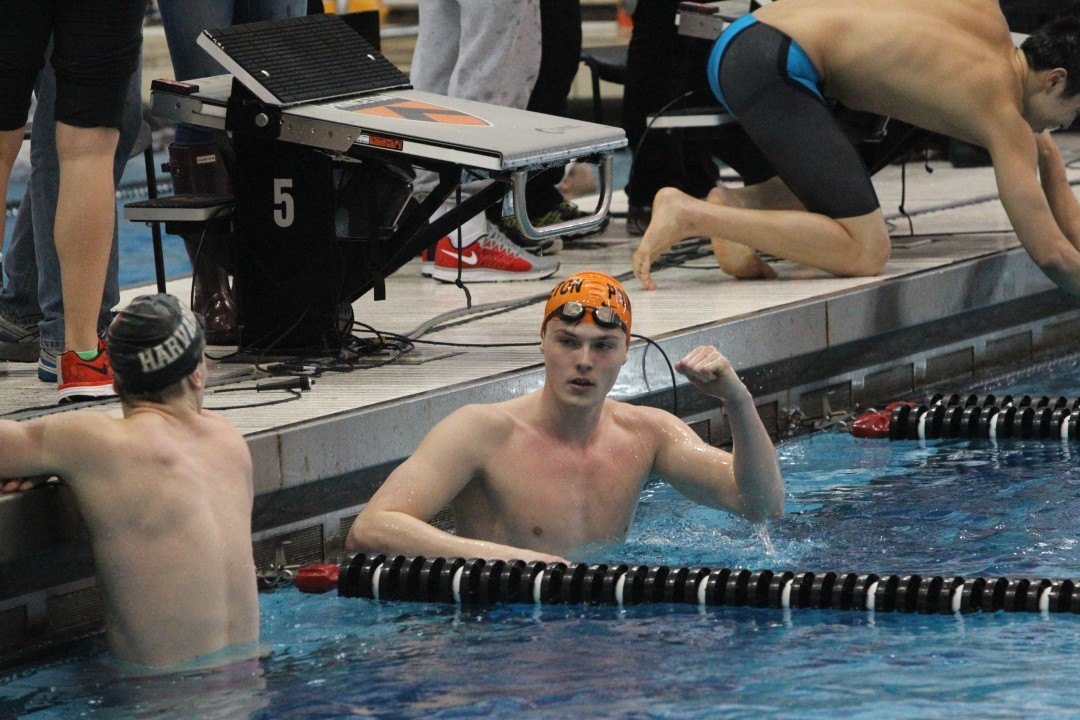 Princeton lit up the pool on the first day of competition at the 2015 Ivy League Men’s Swimming and Diving Championships, setting meet, conference, and pool records in both relays and winning two of four individual events. There have been solid swims across the board from each of the Ancient Eight, and overall, the level of swimming and diving is up a notch from last year.

Harvard had won this event the last two years in a row and came into the meet with the fastest seed time. Princeton, though, had placed three in the championship final of the 50 free during the morning session. Penn, who was runner-up to Harvard last year, and a much-improved Yale relay were also contenders.

Princeton never gave any of them the chance. Senior Harrison Wagner shot off the block and split a 19.42 leadoff leg, the exact time he had gone in prelims of the 50 free. Classmate Connor Maher went 19.27, sophomore Julian Mackrel was 19.64, and junior Sandy Bole brought them home in 19.02 for a combined 1:17.35. Not only did the Tigers set a new meet record, conference record, and pool record, but they also picked up an NCAA “A” cut on the first event of the meet.

Whereas the 500 was one of Harvard’s strongest events in 2014, with three swimmers in the championship final, this year told a different story. The Crimson picked up sixth and eighth from Aly Abdel Khalik (4:21.53) and Spenser Goodman (4:29.57). As it turns out, their top swim came from freshman Jack Boyd who won the consolation final with a lifetime best by nearly two seconds: 4:20.83.

Princeton had posted the top four qualifying times out of prelims and thus occupied the center lanes in finals. Junior Teo D’Alessandro and senior Connor Maher were out first in the fly, with Michael Wen of Penn right behind them. Maher pulled ahead after the backstroke, before D’Alessandro took over the lead with breaststroke. D’Alessandro brought it home and claimed his second 200 IM title in as many years. This time the winning time was 1:44.94, about 6/10 faster than a year ago. Harvard’s Christian Yeager finished second with 1:45.61. Marco Bove took third in 1:45.76, just ahead of teammate Maher’s 1:45.98. Byron Sanborn, also of Princeton, was fifth in 1:46.11. Grant Proctor from Penn placed sixth in a lifetime-best by 2 seconds: 1:46.46. Yale’s Andrew Heyman (1:47.43) and Penn’s Michael Wen (1:47.62) rounded out the final.

Princeton ended the evening the same way they had begun: winning a relay in record-breaking fashion. Michael Strand (46.70), Jack Pohlmann (52.63), Corey Okubo (47.61), and Harrision Wagner (42.62), took a chunk out of the meet, conference and pool records with their 3:09.56. Penn, who had battled Columbia for second throughout the race, earned the second spot on the podium in 3:11.82, a new school record by 1.3 seconds. Dillon McHugh, Kyle Yu, Wen, and Schultz contributed to Penn’s effort. Harvard (Jack Manchester, Eric Ronda, Jacob Luna, and Griffin Schumacher) took third with 3:12.44.