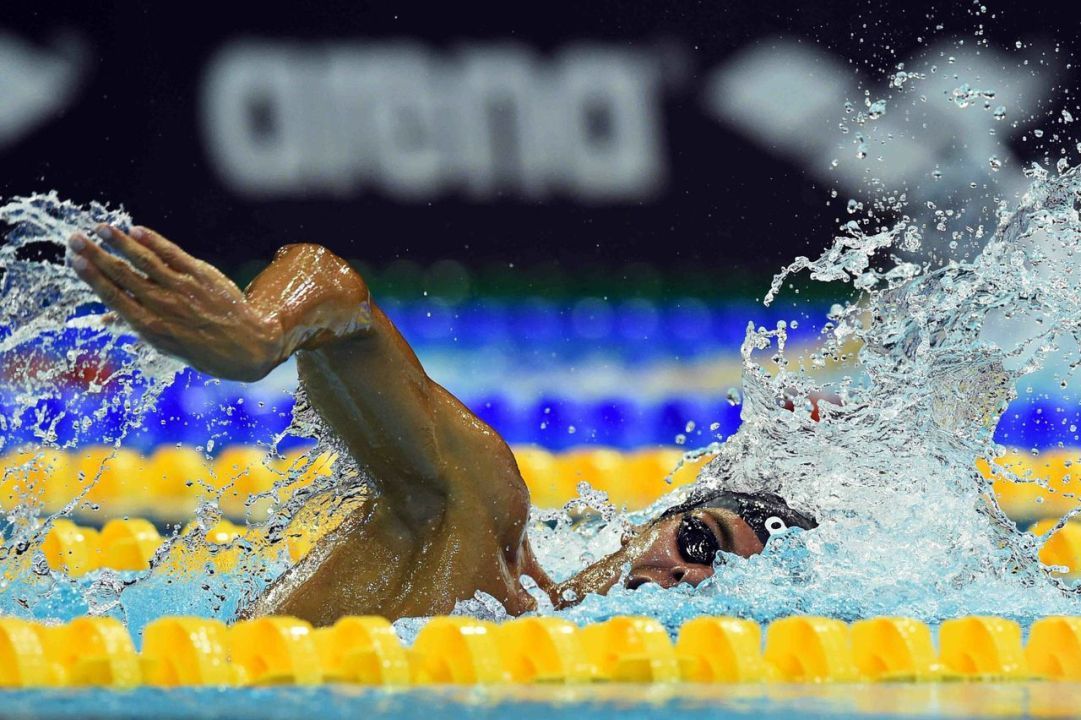 Gregorio Paltrinieri's world record 1500 helped bring Italy to the top of the medal count, where the country is tied with Russia and Hungary with 10 medals apiece. Current photo via Arena International

After an insane third day of finals at 2015 LEN European Championships, the medal table has shifted (or perhaps evened out), and Italy and Russia now join Hungary at the top of the medal count. Each team has earned 10 medals after the 22nd event.

Perhaps the most exciting swim of the day came from Gregorio Paltrinieri, who added not only a gold medal, but also a world record to Italy’s count, by swimming 14:08.06 in the 1500. That record was the oldest in the books, previously set by Grant Hackett in 2001. His training partner Gabriele Detti grabbed the silver with 14:18.00. Other Italian medals today came from Alessia Polieri in the 200 fly (3rd, 2:04.37), Marco Orsi  in the 50 free (2nd, 20.92), and the 4×50 relay team of Silvia Di Pietro, Erika Ferrailoli, Aglaia Pezzato, and Federica Pellegrini, who took the gold.

With double wins (and a new world record) today, Katinka Hosszu continues to keep Hungary at the head the medal standings, alongside teammate Laszlo Cseh.  Hosszu clocked new world record time of 56.67 in the 100 IM and a 1:59.84 in the 200 back, while Cseh set a new European and championship record with a 1:51.36 in the 200 back.

Russia added more individual medals to their pile including Evgeny Sedov’s gold in the 50 free, a 20.87; Daria K. Ustinova’s silver in the 200 back, a 2:01.57; and a silver in the men’s 100 back from Stanislav Donets (50.30). They also nabbed a medal in the women’s 4×50 free relay, when Rozaliya Nasretdinova, Veronika Popova, Daria Kartashova, and Natalia Lovtcova posted 1:36.62 for third in the event.