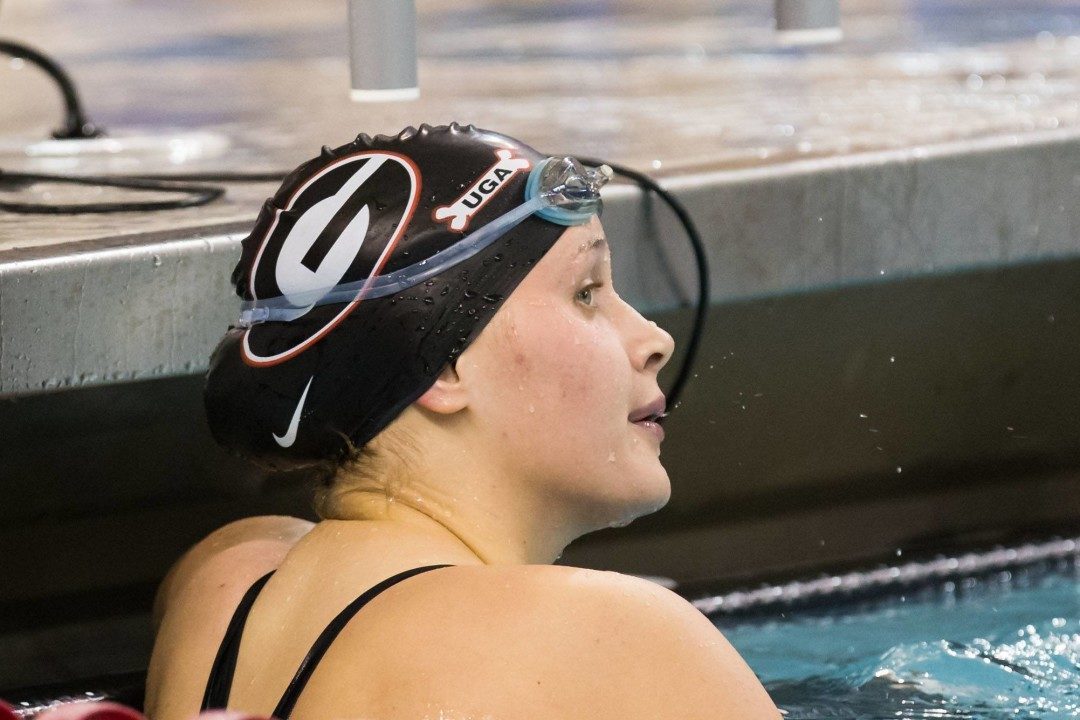 There's a new top team in town, in large part due to Olivia Smoliga's great finish to the fall semester Current photo via Tim Binning/TheSwimPictures.com

With the fall season/invites on the books, it’s time to reevaluate with the latest edition of our 2015-16 Women’s NCAA Power Rankings.  The past 3-4 weeks have been our first real look at what each team might bring to the table in March.  Some teams rest more than others for their fall invites, so we tried to hold back on knee-jerk reactions.  However, fast swimming is fast swimming, and those who majorly impressed were at least rewarded a bit.  There’s still a lot of swimming to be done, but for now, here’s our top 20 teams:

Three relays in the top 12 nationally, and Madeline Rusch is looking like a legitimate #1 sprinter for the Blue Devils.

Surprisingly deep team, with a lot of potential NCAA qualifiers.  The big question, though, is if they’ll score.  Katie Grover (6th in the 200 fly nationally) and Linnea Mack (16th in the 100 back) are currently in the best spots to do that.

After storming through the regular season, the Tarheels were “meh” at their Nike Cup Invite.  UNC doesn’t have a single swimmer sitting in the top 20 of an NCAA event nationally, and just one relay currently sits in the top 16. That’s not atypical for UNC, which historically has been a late-breaking team come championship season, but the uncertainty leads to a slide in the rankings.

Taking their fall invite results with a grain of salt (the Tigers typically go all-in), but can’t dismiss a team with two breaststrokers under 59 seconds in November.  Along with Hannah Stevens, should be very competitive in the medleys.

Still no breaststroker, but overall, their fall invite was a step in the right direction.  Plus, it’s tough to be outside of the top 15 with Natalie Hinds and Jessica Thielmann on your roster.

Swam long course only at AT&T Winter Nationals, but Siobhan Haughey, Gillian Ryan, Ali Deloof, and Clara Smiddy all made at least one individual A-final.

Marie Chamberlain filling in admirably for Brooklynn Snodgrass.  Her 51.87 last month in the 100 back was a lifetime best by over a second.  Having Lilly King helps, too, and gives them a phenomenal front-half on the medley relay.

Traditionally puts a lot in their fall invites, but even with that, the Wildcats surpassed initial expectations.  Freshman Annie Ochitwa was the most impressive, headlined by her ‘A’ cut in the 100 fly.

No super stars that fly off the page, but the Tigers have five relays in the top 16, and at least one legitimate NCAA scoring threat in almost every event.

Minimal depth, but are going to be sneaky good in the four sprint relays.  Alexia Zevnik (top 20 in five events, top 8 in two) is looking like one of the country’s most improved swimmers.

There they are!  After wondering what was up down in SoCal, the Trojans impressed at the Texas Invite.  Freshmen Kirsten Vose and Riley Scott look like they’ve shored up the breaststroke events–a big question mark coming into the season.

Kelsi Worrell is typically the source of big news for the Cardinals, but freshman Mallory Comerford made some noise last month, as well, cutting three seconds of her best 200 free to get under the 1:45 barrier. She might be the final piece that Louisville needs to get over the hump and take an NCAA medley relay title, and gives the Cardinals more  options to boost their 800 free relay – the team’s weakest at NCAA’s last season.

Lauren Driscoll sighting!  The senior crushed her previous best in the 400 IM, and now sits 5th nationally at 4:06.64.  The swim of the meet, though, was freshman Madeline Banic dropping a 51.19 in the 100 fly.

Took home the title at their home invite last month.  Although Stanford primarily stole the show, the Aggies had some great swims of their own; Bethany Galat dropped a 4:04.06 in the 400 IM, good for 2nd in the country, and more than 5 seconds faster than she was at this point last season.

Looked great against USC and Arizona squads that came in ready to swim fast.  Top 10 in all five relays, and Tasija Karosas and Madisyn Cox recorded NCAA individual ‘A’ cuts.

Lights-out in November again, posting top-ranked times in 3 of 5 relays.  The swimmers outside their big four (Courtney Bartholomew, Leah Smith, Laura Simon, Kaitlyn Jones) are going to be the key.  The performances Ellen Thomas, Caitlin Cooper, and freshman Megan Moroney–particularly on freestyle relays–will be the difference-makers in their goal to come away with team hardware in March.

It’s tough to make a true comparison with where they were last year, given their primary fall meet was (long course) U.S. Nationals, but nonetheless, the Bears were far from impressive to close out the first half of the season.  Last year, the Bears had 17 swims sitting in the top five going into the New Year.  This season, they only have 5, including converted times.

The IM events were huge weakness for Stanford last season.  Ella Eastin made it clear that wouldn’t be the case while she’s around.  Her 4:01 400 IM would have run away with NCAA’s last season.

Nice to see Olivia Smoliga swimming better again; her nation-leading times in the 50 (21.82) and 100 freestyle (47.69) are faster than she was at any point last season.  Hali Flickinger only seems to be getting better, too.  Overall, the ‘Dawgs currently have more swims in the top 5 (12), the top 8 (15) and the top 16 (26) through the first half of the season than any other team.  Cal was the better team on paper coming into the year, but until they show us more, Georgia will sit #1.

UVA beat Georgia in an NCAA formatted meet at the UGA invite, so how could they be ranked ahead of them?

Maybe Georgia was less rested. Maybe they swam off events (their #3 and 4 events as opposed to what would score the most points). Winning the invite is not important to coaches compared to points at the end.

0
0
Reply
What meet were you watching?
Reply to  LOLLERcoaster

0
0
Reply
What meet were you watching 2?
Reply to  LOLLERcoaster

Oh yeah and maybe you forgot or didn’t know that the No. 1 seed in the 100 fly and 400 IM wasn’t able to compete after prelims the second day of the meet.

Texas A&M also beat Stanford at the Art Adamson Invitational. Would you take A&M over Stanford?

In a conference meet, I would take TAMU over Stanford, but at NCAA’s I would take Stanford. TAMU has more depth and Stanford has more top 8 talent.

Ok.
Sixers won their first NBA match of the season against Lakers a few weeks ago.
Then Golden State was beaten by Milwaukee.
In their next match Milwaukee was beaten by Lakers.
So logically the Sixers are better than the Warriors!
😆

Fortunately for you, Swimmer, the author explained the rationale behind ranking Georgia at #1, including any of those from Cal who would call the “unofficial” ranking into question: “Overall, the ‘Dawgs currently have more swims in the top 5 (12), the top 8 (15) and the top 16 (26) through the first half of the season than any other team. Cal was the better team on paper coming into the year, but until they show us more, Georgia will sit #1.” Of course, if it makes you feel any better, Swimmer, you could develop your own website and rank ONLY UVA. Then we could visit your site and ask similar questions of your opinion.

Best wishes to Olivia on making the Olympic team, I believe in you!

Hswimmer, unfortunately I don’t see in which event.

I could see her making it in the free relay. 100 back will be tough, but she’s been 59 at Pan Pacs with more rest she could definitely challenge.