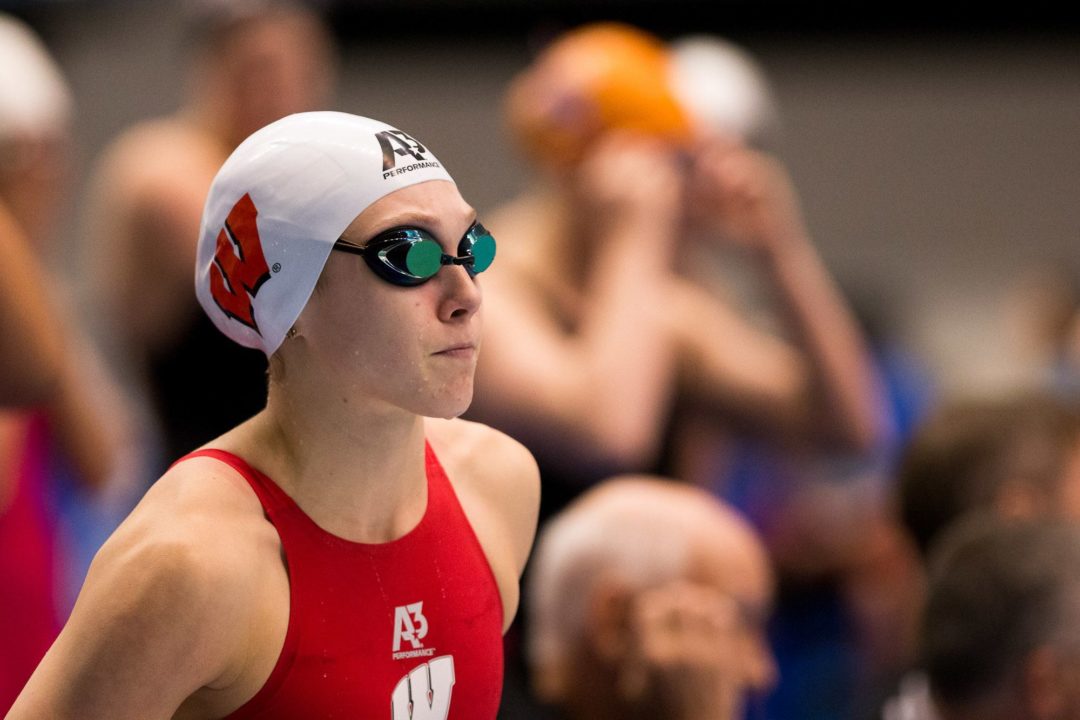 The women's fifty free hasn't seen this much speed in a while and it could by anybody's race Thursday night. Archive photo via Tim Binning/TheSwimPictures.com

This event is fast.  Not 4.3 forty-yard dash fast or 90 MPH fastball fast, but all top eight women under 22 FAST. The top seed is already two tenths ahead of last year’s winning time. Scratch that, the top five (with sixth and seventh tied) are seeded with times that beat out last year’s winner, Margo Geer in a 21.78.  This fifty will decide who the fastest woman in DI swimming is and you’re not going to want to miss it.

Ivy Martin wasn’t viewed as a major threat in this race last year nationally, but fans of Wisconsin sang her praises from the mountain tops. This year, she has certainly become a force to be reckoned with, beginning with that early-season swim that was one of the fastest October 50’s we’ve ever seen. She is leaps and bounds ahead of where she was last year, a half a second to be exact, and shows no signs of stopping. She’s on fire coming into this meet and has a slight edge over Olivia Smoliga on the experience meter.

However, Smoliga is just a fingernail’s-length behind, busting out a 21.54 at her conference meet and looking to speed up even more once she’s landed in Minneapolis. Yes, it’s tough to knock off a couple of tenths in a fifty, but if this Georgia Bulldog nails the perfect start, turn, and finish she could steal the fastest woman alive title.

Just like the 100, Kasey Carlson has the right amount of confidence and experience on her side to make her a player in this race. Again, just like the rest of the field, she’s way ahead of where she was last year. If she was one of the many PAC 12 swimmers that trained through conference, she could be able to shave a couple of tenths and make a run for the top spot. But you can’t count the defending champ. Geer will face some tough challengers to try and make it two in row, but definitely has a shot. Defending her title will give her that extra fire that may surge ahead of the field.

Two other majorly improved sprinters, Madeline Locus and Madeline Schaefer, will add some serious speed to the A final. Georgia’s Locus is a major surprise, seeing as though she was 22nd at this meet last year. She’ll help fill the shoes of graduate Megan Romano, who finished second last year, in hopes of reaping in as many points as she can. Schaefer, Stanford’s speedster, is another high seed that is faster than she was last year and is another PAC 12er who may not have gone all in at her conference meet.

Faith Johnson was a surprise freshman out of the rockstar Tennessee team last year that picked up thrid in this event. Even though her speed isn’t the fastest of the group, she has a year under her belt and will definitely be in contention. A brand new name to the group is San Diego State’s freshman Anika Apostalon. Like the rest of the field, she’s had a breakout season and is putting up some impressive times as a first year. If the nerves of her first NCAA Championships doesn’t shake her, she could sneak into this A final.

There interesting thing about Florida’s Natalie Hinds is that overall, she didn’t feel as sharp at SEC’s this year as last year, but she still went a lifetime best of this 50. After winning the B final at NCAA’s last year, it will be hard to keep her out of the top 8.

There’s so many people we want to pick for this top 8, just because it would make such a great story. Florida State’s Tiffany Oliver or Texas’ Ellen Lobb, both of whom are seniors, would be a great way to end their careers in a final that isn’t expected to be all that senior-heavy. Lobb came on really strong at Big 12’s this season.

There’s two Aggies of Texas A&M, Erica Dittmer and Lili Ibanez, seeded in the top 13, which continues the tale of just how far A&M sprinting has come in the last two years. Auburn freshman Allyx Purcell could be the next wing of the Auburn sprinter development program, even though she wasn’t a huge recruit when she got there. Utah’s Traycie Swartz would be a huge turnaround for that program in one year if she were able to get into the A-final.

There’s an Olympian, Lia Neal, in this event, as to is Ellese Zalewski, who is way underseeded in all of her events. Cal will be hopeful to get Kaylin Bing or Farida Osman into the A-final for their national title chances.

But our darkhorse is a swimmer who has been largely written off in our comments as a “non-factor” in Georgia’s individual scoring despite being in the A-final last year: Georgia sophomore Chantal van Landeghem, who is the 19th seed. Yes, the defending SEC Champ in the 50 free had a bit of an off-meet at SEC’s, and was outdone by her teammate Smoliga in the sprint freestyles. However, last year she came into NCAA’s with a sub-22 from SEC’s and couldn’t match it again.

This race could be anybody’s on Thursday night. Make sure you don’t blink or you may miss the crowning of a new NCAA Champion and college’s fastest woman.

The speed of this NCAA 50 free is unprecedented! Olivia Smoliga vs Ivy Martin should be exciting, with no doubt that Margo Geer will step up at the right time. Maddie Locus, who swims for Georgia, swam a little slow last year as she was 6 weeks into a 4 month fairly severe bout of mono, which was preceded by 4 1/2 months of post-traumatic back pain. It was a bad year for her, and this year is already an improvement. Will be a great race to watch!

The one down side of having only one winner…if you like so many of the athletes and you want them ALL to do well… Oh well, such is life. My sentimental favorite is Martin, as I think that would be a great and exciting thing for D1 swimming – a title from a non powerhouse team. That being said, I hate to vote “against” Geer – she’s been super exciting to watch ever since she began her college career (well, before actually). And, it is hard to bet against her stellar results. She’s got such a nice stroke and is wonderful to watch race. But, that’s what many thought about AVW – unbeatable…didn’t think Liv Jensen would actually, really, truly… Read more »