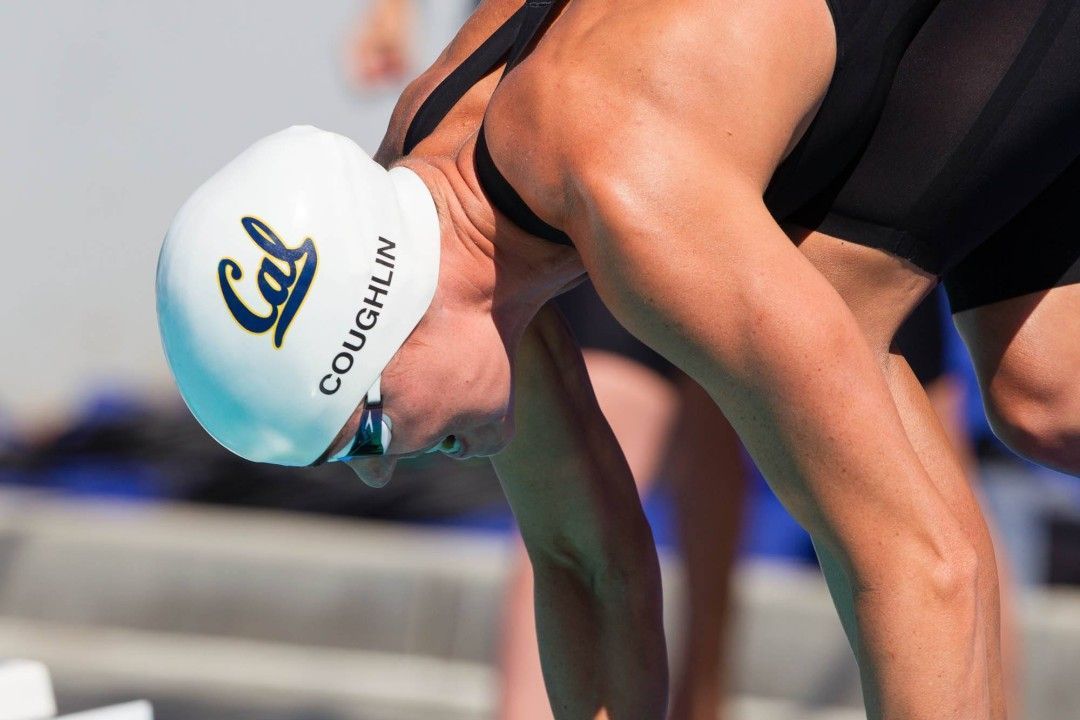 Natalie Coughlin is one of a number of swimmers who is just looking for a way onto the Pan Pacs team in their final chances on Sunday. Current photo via Tim Binning/TheSwimPictures.com

Info You Need to Follow Day 5 Prelims in Real-Time

There were very, very few scratches of consequence on the last day of this meet, outside of Katie Hoff’s injury-forced drop in the 200 IM that we reported last night. As one would expect – it’s the last day, there’s nothing to save energy for, and it’s time to go-for-broke. At least, that’s true in the Olympic events that are selectors for Pan Pacs.

In the non-Olympic distance events, it seems as though there’s a little less motivation. In the men’s 800 free, four out of the top six seeds are scratched. Michael McBroom remains as the top seed, but Matt McLean, who was the 6th seed on the psych sheets, will move up to lane 5. That means the U.S. Open Record holder Connor Jaeger, his teammate Sean Ryan, Auburn’s Zane Grothe, and open water Pan Pacs team member Andrew Gemmell have all dropped the race.

The women’s 1500 free is equally as implosive, with Katie Ledecky opting against chasing another World Record. Her meet is done with now no entries on Sunday. The top 6 seeds on the women’s side are all scratched, which makes NBAC’s Gillian Ryan the top seed. There was a pretty substantial drop in seed time after her, and while either Lindsay Vrooman or Gillian Ryan probably has the potential to bridge that gap, Ryan’s on-paper advantage is 10 seconds.

Last Chances for the Gold Coast

There’s a few big names on Sunday who are going for their last chance to make the Pan Pacs or Worlds teams and perhaps to extend their swimming careers until Rio. That’s especially focusing on the pros, who don’t have the college system to support them until they can begin their Olympic runs.

In the women’s 50 free, both Megan Romano and Natalie Coughlin are still not on either team (though Coughlin could wind up on Pan Ams if she accepts the invite, in the 100 free).

The same goes for Anthony Ervin in the men’s 50 free – after finishing 5th individually, he’s at least on the U.S. National Team, but still is looking for a seat on the plane to Australia. So too is Josh Schneider, though Schneider, now an assistant at Cincinnati, has a little more cushion from his new position to keep fighting through a missed team.

In the 200 IM’s, Caitlin Leverenz would also fall into the category of those looking to make a team. She was 7th in the 400 IM, the only final she’s qualified for so far, so she’s not on a National Team or necessarily an international team yet either (though, for Short Course Worlds and Pan Ams anybody in a final really has a chance depending on declined entries).

And then there’s the men’s 200 IM, which is not so much about who needs to make a team (Austin Surhoff) as it is about the defending Olympic gold and silver medalists. Michael Phelps will swim in heat 10 in prelims in lane 3, and Ryan Lochte will swim in heat 10 in lane 4. It will be just like the good old days again, except kind of different.

Important to note that the depth is about 2m (7ft) unlike the London or Beijing pools (3m deep) so it may not be a “slow” pool but it’s certainly not a fast pool either.

The 4 last races of the meet ! let’s get pumped up

Sorry for being precise, but it’s a proof that me, at least, I read what you write. Little correction. Amy Bilquist hasn’t been out for all these championships. On day 1 she swam the 100 free prelims in 55.58 and then finished 3rd of the C-Final in 55.87. She was far from her best time and I didn’t see her in the meet then. Like most of the young swimmers who were at US juniors last week, she looked very tired. I don’t know who will qualify for the junior Pan Pacs but I didn’t like the qualifying system. It was based on the best times swum at Nationals this week. It would have been better and smarter to make… Read more »