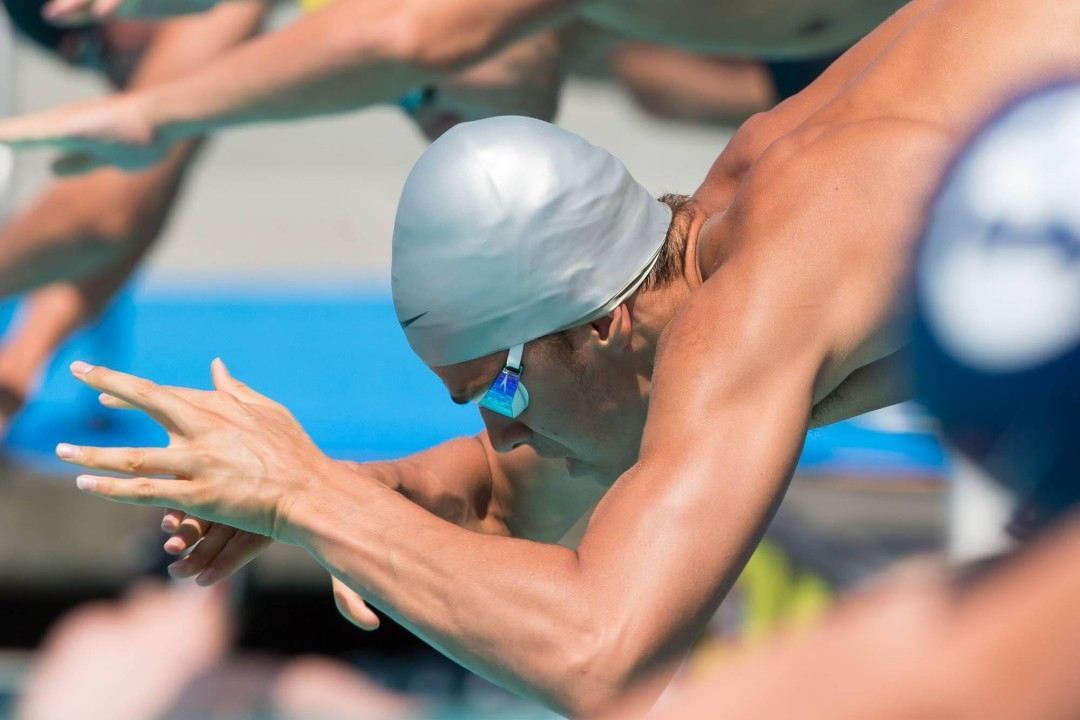 To see all of the 2014 Swammy Award winners, presented by TYR, click here. 2014 Honorees: Courtney Harnish and Michael... Archive photo via Tim Binning/TheSwimPictures.com

In every sport, there comes from time to time an athlete who is so far beyond his or her peer group that it’s hard to find an appropriate context to evaluate his or her performance. This mind-blowing, once-in-a-generation kind of talent was visited upon the boys’ 13-14 age group over the last year or so in the form of Michael Andrew.

The thing about a swimmer like the 14-year-old Michael Andrew in the age of social media is that everyone is immediately aware of everything he does, has an (expert) opinion, and feels compelled to voice that opinion on any number of platforms. We are not here to make predictions, or infer linear relationships between this swim and that, or even debate training methods. We are just focused on the carnage Andrew wreaked upon the 13-14 national age group recordbooks, something it’s unlikely we’ll see again anytime soon.

Both our 2014 Swammy Award choices are extraordinary talents. Like Andrew, Courtney Harnish is winning this honor for the second year in a row.

Harnish has the breadth and depth of few swimmers of her age. Among her 16 top-ten swims in 2014 were all the freestyle distances from the 50 to the mile. The only stroke in which she didn’t post a top-ten time was breast; yet with the top 400 IM time in the country she necessarily holds her own in that discipline, too.

The 13-14 age group may be the last time an IMX ranking is relevant for age-group swimmers, since many of them don’t continue to compete in all the events that make up the score. Harnish was ranked Number One among 14-year-old girls for the 2013-14 short-course season but wasn’t 14 long enough to register a LCM ranking. She was, however, the fourth 15-year-old in long-course season, and is Number 2 among 15-year-olds this fall.

Harnish gained international experience this summer as a member of the National Junior Team, representing the US at Junior Pan Pacs. There she medaled in the 200, 400, and 800m freestyles, taking home gold in the 400. So far this fall she has the fastest time for a 15-year-old in the 500y free and the second-fastest in the 200/1650y free, 200y fly; she is also top-ten in the 200/400y IMs.

Editor’s Note: Ruck is technically a Canadian, but given that she lives and trains full-time in the United States, we decided to recognize her accomplishments anyway.

It might be easier to say that the only 13-14 short-course records that were not attributed to Michael Andrew during his tenure in the age group were the 500y, 1000y, and 1650 freestyles. Because at one time or another he broke every other record, and most of them more than once. Yes, Andrew is big for his age. He won the lottery when it comes to size and strength, but he still had to get the job done – which he did, again and again, because he loves to race.

Only one 14-year-old took on Michael Andrew and won: Reece Whitley. Whitley now owns all four breaststroke records for the age group, having broken them multiple times throughout the year.

Had the pleasure to meet/see him swim at 2015 easterns this year, wow he blew everyone and the pool record away in the 100 breast.

Of course agree about Andrew on the boys’ side. He was a monster. Hard to choose on the girls’ side between Harnish, Homovich and Ruck. But after what she has recently shown at the last US winter junior nationals, I would have picked Taylor Ruck. Seriously she looks like a future Missy Franklin. Very fast young. Tall girl. Freestyler/backstroker. And Canadian blood. Amazing talent. Future world and olympic gold medalist in my opinion. I know she’s Canadian and I don’t know since when she lives in USA, but if she decides to swim for USA in the future, as Missy did, then you will have a pretty crazy insane women’s team in the next years. Canada would cry but would… Read more »

Taylor Ruck has been in the US at least 5 years, as my daughter and her teammates watched her come to Far Westerns and school us in how to race the 500 REALLY fast! I’m excited to see her name when we happen to swim at the same meet. She’s truly amazing!

Hey Bobo, we’ll trade The Biebs straight across for Taylor Ruck. She should be spectacular for us, adding to names like Maclean, Overholt, Oleksiak, Smith, Harvey, Gowans, and several other up and comers. You can have The Biebs, and his new private jet 🙂