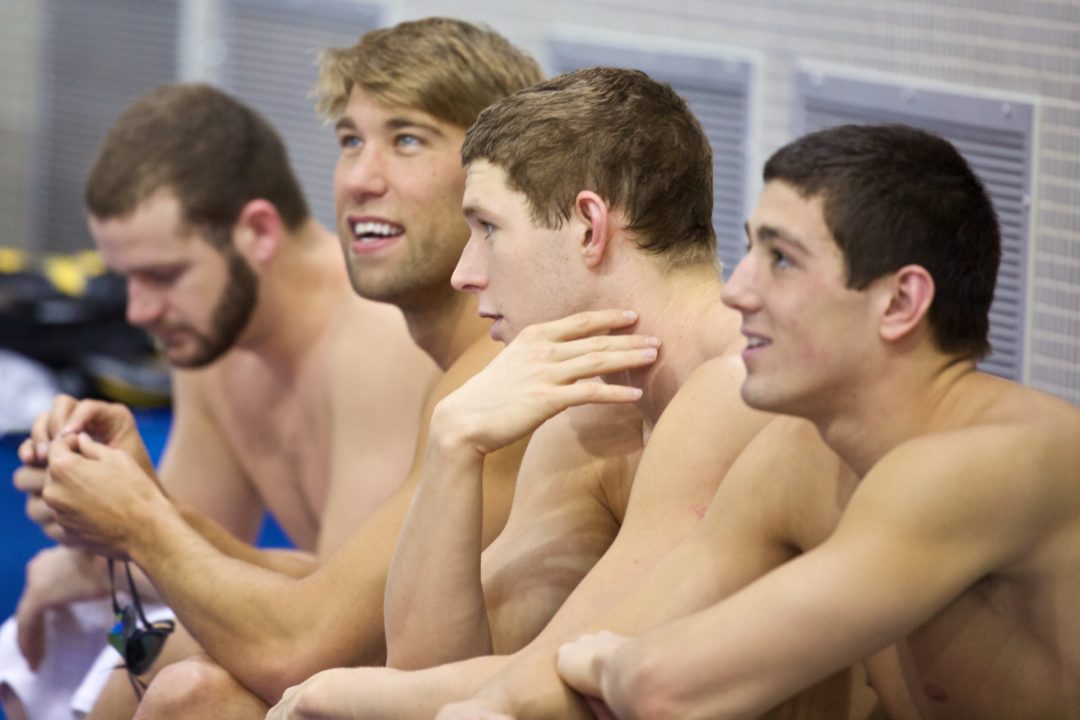 Although Tyler Clary (far left) is a scratch today, (L-R) Matt Grevers, Ryan Murphy and Jacob Pebley will all collide in the men's 100 back on the final day of action in Austin, Texas. Current photo via Rafael Domeyko, rafaeldomeyko.com

Nevada Governor Steve Sisolak announced last night that the state would move into Phase 2 of its reopening plan. As of Friday, Nevada pools can reopen.

The final day of the Austin Grand Prix will be a busy one, with some excellent races setting up early. The men’s 100 backstroke is a loaded field with Olympic and World Champ Matt Grevers taking on big names like Nick Thoman, Eugene Godsoe and Arkady Vyatchanin as well as up-and-comers Ryan Murphy and Jacob Pebley.

In addition, Katie Ledecky and Lotte Friis will tangle once again in the 800 free after Ledecky won the 400 in convincing fashion. French star Yannick Agnel will look to extend his freestyle dominance in the 1500 after winning the 200 and 400 and finishing second in the 100.

Our 2014 Austin Grand Prix Central page is here, which has links to live results and a live stream along with storylines and psych sheets.

Canada’s Audrey Lacroix will sit on the top time of the morning, going 2:11.58 in the final circle-seeded heat. She’ll be surrounded by a trio of 17-year-olds tonight as Remedy Rule (2:13.15), Megan Kingsley (2:14.32) and Noemie Thomas (2:14.62) hold the  next three seeds. Thomas won the 100 fly over Lacroix on Friday night, and she’ll look to repeat the feat when the Canadians go head-to-head again tonight.

Last night’s 400 IM winner Caitlin Leverenz out of Cal is the 5-seed followed by Victoria Edwards from the home Longhorn Aquatics Club. 13-year-old Madison Homovich continued her run of great swims this weekend, dropping 1.3 seconds to go 2:16.82 and grab a lane in tonight’s A final. She’ll be joined by Palo Alto’s Ally Howe, who took 8th.

A lot of big names scratched out of the event this morning including Allison Schmitt, Katie Ledecky and Justine Mueller.

A whole crew of young women will pack the middle lanes of the B final. Alicia Finnigan, 15, of First Colony Swim Team sits 9th with a 2:18.78, and NCAC 15-year-old Claire DeSelm is 10th. That heat will also include new NCAP transfer Isabella Rongione.

Tom Luchsinger was the first and only man under two minutes in this morning’s event, staking him to the top seed entering tonight’s finals. The former UNC Tar Heel went 1:59.89 to cruise to victory. He’s followed by NCAP’s Andrew Seliskar, who at age 17 went 2:01.29 to place himself right in the thick of a talented group of pros.

After Seliskar was 100 fly champ from Friday night Tom Shields, and former Stanford star Bobby Bollier sits on the fourth seed. Current Grand Prix series leading money-earner Conor Dwyer will look to add to his haul from the 5th spot after going 2:02.64.

Three swimmers within a second highlight the top of the B final. Alec Page, Coleman Allen and Luis Fabricio were all 2:06s this morning to sweep spots 9 to 11.

Texas alum Laura Sogar, who spent her collegiate career training in this very pool, took home the top seed in the 100 breast, going 1:08.06. That was good enough to top Trojan Swimming’s Jessica Hardy, who went 1:08.95.

Two more swimmers got under 1:10 in the preliminaries: they were Canada’s Rachel Nicol (who represents SMU) and SwimMAC’s Katie Meili, a native Texan who had an outstanding collegiate career with Columbia.

Tara-Lynn Nicholas of SMU heads the B final followed by Palo Alto’s Karlee Bispo. Both were 1:11 this morning.

Notable: 200 breast champ Micah Lawrence, who is also Meili’s training partner at SwimMAC, did not swim the event at prelims as it looks like her weekend has come to a close.

As he did in the 200 breast Friday night, Scottish swimmer Ross Murdoch got off to a fast start this morning, going 1:00.87 to nab the top seed in the 100 breast by almost two seconds.

That beat out Trojan’s Mike Alexandrov, who went 1:02.66 to grab the other middle lane for tonight’s final. Tennessee Volunteer post-grad Brad Craig is just a few tenths back of Alexandrov, though, going 1:02.84 in prelims, while another Trojan, Glenn Snyders, sits fourth.

The consolation heat will be another youth movement. Austin Temple of Virginia Tide was 9th and Andrew Seliskar of NCAP 11th – both are 17 years old. 14-year-old pro Michael Andrew went a lifetime-best 1:04.87 to grab 12th. That’s just a tenth off of the National Age Group record for the 13-14 age group, that record is 1:04.74 set by Anthony Robinson all the way back in 1994.

Also in that B heat will be veterans Gabriel deSousa of NBAC and Eetu Karvonen, the former Division II star at Grand Canyon.

The 100 back will be a tightly-bunched field tonight and also a young one – the oldest swimmer in the top 16 is just 22 years old. One of those 22-year-olds, though, is the top seed. Former Missouri star Dominique Bouchard went 1:02.57 to pick up lane four for tonight’s final.

SMU’s Isabella Arcila was just a tenth behind, going 1:02.69, and Megan Romano will look to add to her series-leading $2100 of prize money as she sits on the three seed.  15-year-old Danielle Hanus of Swim Ontario is fourth, followed by 200 backstroke champ Hilary Caldwell, a fellow Canadian.

Helene Neuhaus leads the B field for tonight along with Cameron McHugh of Cypress Fairbank.

Matt Grevers and Nick Thoman are the top two, each going 54 this morning. Grevers, the defending Olympic Gold medalist, was 54.68, while the silver medal-winning Thoman was 54.86.

Next were the duo of Cal Golden Bears who tied for third. Jacob Pebley and Ryan Murphy were both 55.13 in the morning session. The third pair was New York Athletic Club’s Arkady Vyatchanin (55.51) and Stanford pro Eugene Godsoe (55.58).

Finally, Germans Christian Diener and Felix Wolf rounded out the top 8 with a pair of 56s.

Goeffrey Cheah will lead the B final after going 56.85. That heat will include 14-year-old Michael Andrew, who broke the National Age Group record by .01 this morning, going 57.38 and taking 12th.

She won the 400 IM last night, and now Cal’s Caitlin Leverenz holds the top spot heading into finals of the 200 IM. She had a solid breaststroke split to go 2:16.70 overall, but also appeared to cruise the back half of the race, leaving some gas in the tank for tonight.

Second is 400 free winner Katie Ledecky. The 16-year-old from NCAP had the fastest freestyle split and should be a factor to run down the field from wherever she stands with 50 meters to go tonight. Ledecky was 2:17.88. Third is Bluefish swimmer and Texas alum Laura Sogar in 2:18.65 – she looks like one of the few who can push Leverenz in that breaststroke leg tonight.

The B final is also a tough field in an event a bunch of big names entered. Destiny Nelson of Frisco is 9th, and she’ll have to fight off a heat that includes Canadian Tera Van Beilen, Abigail Duncan, Ally Howe and Simone Manuel.

Cal’s Josh Prenot took the top seed in the 200 IM just as he did in the 400 IM yesterday morning. The college sophomore went 2:04.08 in prelims to win his heat.

Andrew Seliskar will be second; he was also a 2:04. Seliskar’s 2:04.80 is just a tenth ahead of Stanford signee Curtis Ogren.

There’s a decent gap between those three and the rest of the field, but its likely that gap will close in a hurry come finals time. Fourth seed is Conor Dwyer of NBAC, who won the 400 IM last night. Behind him is last year’s NCAA runner-up in the 400 IM Michael Weiss of Wisconsin. Both were 2:06 this morning.

Evan White of Swim Ontario is sixth and Alec Page and Sean Grieshop are the last two into the championship final.

Olympic breaststroker Scott Weltz just missed the A heat, taking 9th in 2:08.08. Behind him are Geoffrey Cheah of Palo Alto and 13-14 NAG record-holder Michael Andrew, who was a little ways off his personal best in prelims.

This morning’s session will continue with early heats of the 400 Medley relays, though the majority of the heats will run with finals. Then will come alternating heats of the women’s 800 free and men’s 1500 free. The fastest heats of both will swim with tonight’s finals, which start at 6 p.m. Central.

NAG record for Michael Andrew in the 100m back! He’s now second on the all time list for 100m breaststroke as well. Great swimming!

That was my first time watching his breaststroke. He is noticeably lower during his breath than everyone else – just as Dr. Rushall advocates.
Can someone post his backstroke race as I can’t seem to see it.

I noticed that too. He was only .1 off the NAG in that event too.

Fun to see Ledecky do the 200 IM and it should make her matchup with Friis in the 800 directly afterward much more interesting assuming she doesn’t scratch one of them. Wonder how she’d do in a 400 IM. I know she’s a decent 200 yard flier (1:55) and all her strokes looked fairly smooth; she only finished a second behind Leverenz although I think that gap will definitely be bigger tonight.

No outstanding or surprising times this morning, but looks like some good races shaping up for tonight regardless of the times, in men’s 2Fly, men’s 100Back, men’s 2IM, women’s 100Breast since Hardy is out of shape should be good matchup with Sogar, women’s 800 Ledecky/Friis, and the 1500 McBroom/Meloulli/Agnel! I’m interested to see how Dwyer does with his 2Fly/2IM training double, how low Luchsinger can go, and can he dominate now with all the NBAC training, whether Seliskar can keep up with the big boys at the lesser IM distance, how Ledecky can handle back to back double. And of course we’re all excited to see what Agnel can do in a 1500, and how many more NAGs can Michael… Read more »