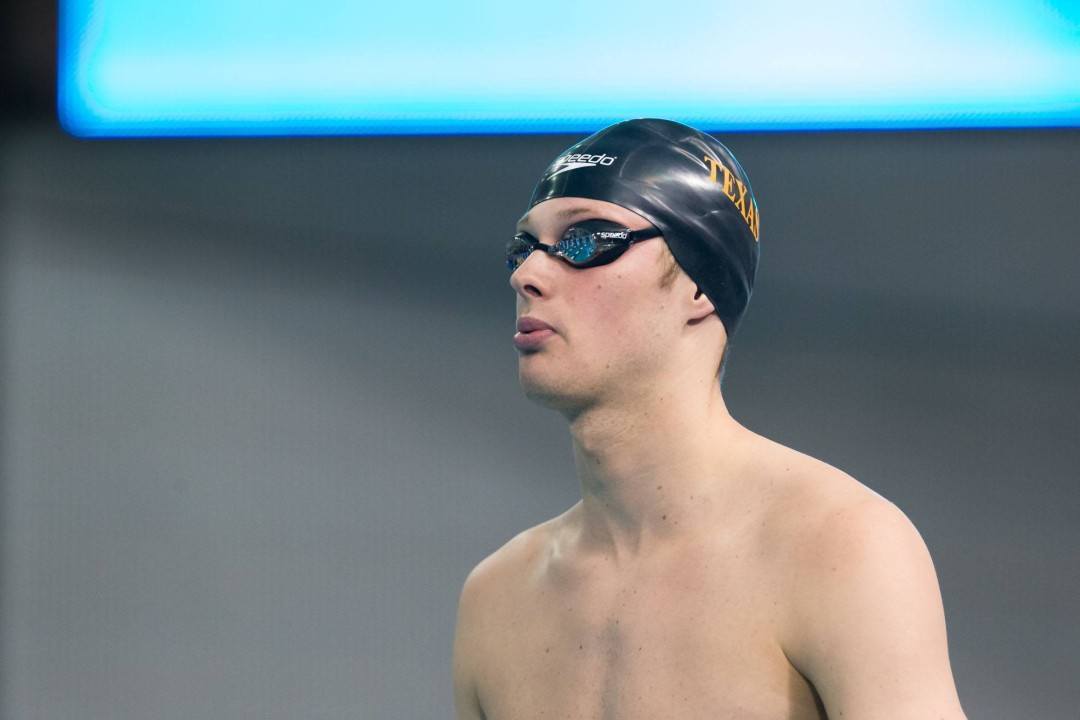 It's no secret that Jack Conger and the Longhorns are on a roll. How does everyone else stack up? Current photo via Tim Binning/TheSwimPictures.com

Following up our 3rd edition of our 2014-15 NCAA Women’s SwimSwam Power Rankings with our first set of Men’s Power Rankings in 2015.  Like with the most recent women’s version, we’re keeping the rankings explanations shorter, and paying a bit more attention to some key milestones for a few teams (breaking into the top 10, the top 5, or winning NCAA’s) .

Remember that these polls are primarily focused on end-of-season expectations, and aren’t overly-reactive to dual meet results.

Small shakeups from 21-25, with Iowa falling back and Texas A&M entering the mix after bouncing back from a subpar opening semester with an impressive January.  With three legitimate sprinters coming around, they could be a disruptor in the sprint free relays.  The team to watch in this group, however, is the Wisconsin Badgers.

Five reasons Wisconsin could sneak into the top 15:

1) The resurrection of Drew teDuits (already under 1:40 in the 200 back)
2) Pair of mid-distance/distance scoring threats in Matthew Hutchins and Nicholas Caldwell
3) Returning 19 of 20 of their relay legs (including 3 of 4 from a sneaky-good 800 free relay)
4) Returning scorer Nick Schafer keeps getting better
5) Cannon Clifton morphing into an effective #1 sprinter

The biggest shift from 15-20 is UNLV dropping two spots following their upset defeat to conference foe Wyoming.  The Rebels are definitely better suited for a championship format than a dual meet, but they were exposed for their lack of depth.

Keep an eye on Virginia Tech.  Although the H2Okies failed to score a single relay point last season, they were seeded to score easily in all five events.  If they can figure out how to swim better as a team at NCAA’s, they could easily be knocking on the door of the top 15.

Five reasons Virginia Tech could finish in the top 15:

1) Returning 19 of 20 relay swims
2) Collin Higgins posted the 7th fastest time in the 200 back last season at NCAA’s
3) The Brothers Fiala (C.J. and Brandon) provide excellent relay depth
4) Morgan Latimer is a dual-event scoring threat
5) Diving crew has multiple athletes on the edge of scoring

The top three spots here stay the same, but a very deep Ohio State team jumps into the top 15 a pair of solid wins against Indiana and Louisville.  Despite looking incredibly sluggish in their loss to the Buckeyes, the Cardinals are too good and have too much talent to drop below the 12 spot.  Good enough to upset the order and maybe break into the top 10.

Lots of uncertainty here.  Kevin Cordes has looked—dare we say—beatable.  Cristian Quintero is back, but the Trojans still don’t have a breaststroker.  Stanford has a ton of question marks right now (we’ll know more after this weekend against USC).  Auburn has shot up our rankings after bolstering their roster with some new additions, but how will they handle the conference-to-NCAA turnaround?

Five reasons NC State could finish in the top 8:

No changes in the top five, and if NCAA’s were swum today, these five are relatively set in stone:

Still, there have been teams like this year’s Texas squad; those that look unbeatable in-season until they’re beaten post-season. Since I was a part of it, the team that comes to mind is the 2004-2005 Cal team. Going into NCAAs ranked 1st. Duje Draganja swimming 19-low/42-low in the sprint frees in the rain at Spieker. Beating Stanford in the Big Splash for the first time since most of the Freshmen were born. We ended up 4th at NCAAs.

Honestly though, I don’t feel like the ‘horns have been all that fast in-season this year (with the exception of a great swim here and there). Sure, Conger has had a spectacular past two meets, Smith had a couple of great swims, and a handful of guys swam very well at the mid-season invite, but I haven’t seen anything that worries me about them being “too” fast right now.

If Murray or Ellis were going 19.3s, Darmody or Schooling was 45.5 100 back/fly in dual meets, then that’d be a sign that they were most likely way too rested. I think the best is still ahead for Texas, but I also know that nothing will come easily. Cal and… Read more »

Honestly, other teams should be extremely scared because of how fast they are swimming.

If the other teams are scared, they’ve already lost. Since I’ll be in Iowa in March, I sincerely hope they are not!

It’s possible that they have already lost. I’m thinking about going in March, but I can’t figure out if I should fly into Cedar Rapids or Des Moines.

completelyconquered – you save about $100-$125 flying into Des Moines where you’re coming from…but adds an hour/75 miles to the drive, so have to decide if that’s worth it.

The best deal is actually (believe it or not) to fly into Davenport. You have to go through either DFW or O’Hare to do it, but it’s cheaper than either of the others, and is a compromise on distance – about a 50 minute drive.

I think there is a glitch. Why aren’t the Ivies ranked #1 and 2 respectively?

No one is stopping the Horns this year. \m/ Hook ’em

I’m still cautiously optimistic about Austin Temple in the 50/100 breaststroke, sure he wasn’t near his best time mid season, but he was about 0.7 seconds faster than he was at the same time in the previous year.
I think the longhorns will have 3 or 4 freshmen that score individually.

Lane 0 i really appreciate the respect for my man here. you know what’s good

Lolllzzz the real Austin Temple doesn’t talk about himself, only others because hes humble

Im not sure why my previous comment didnt post(i think the mobile version gets a little glitchy). I agree that Texas men are the heavy favorites as they are miles ahead of where they were last season. Cal is weak in the 100 fly and the distance events. But I want to see us keep it close and pull out an upset!

Should come down to the wire. Last year Texas was thought to possibly have 3 divers score. The only one that stepped up transferred. If they get get any contribution from the divers this year it could make things tougher.

Somebody did their homework on the Texas Breast strokers. About time they get some respect!

Penn State at #17? Shane Ryan and Nate Savoy are a great pair, but the Nittany Lion relays are going to need some really big drops from other swimmers just to qualify for NCAA’s. I’m not sure any of their relays have hit “B” times, much less, “A.”