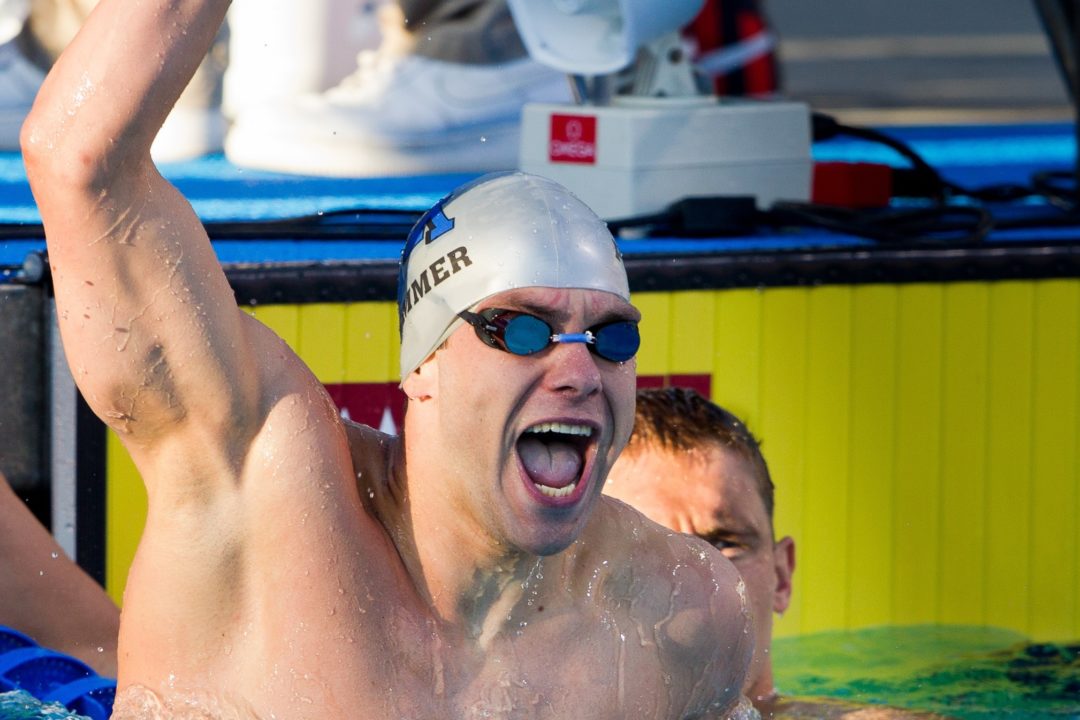 David Plummer just missed out on an Olympic birth last summer. Can he hold off the field next week in Indianapolis to secure a spot on Team USA?

In just seven days (wait, what?  Are we seriously a week out from this meet???), World Championship Trials will be underway at IUPUI Natatorium in Indianapolis, Indiana.  Today we’re taking a closer look at the men’s 100 meter backstroke, an event the American men have dominated for more than two decades, from Jeff Rouse, to Lenny Krayzelburg, to Aaron Peirsol, to Matt Grevers.  After swimming the second fastest time in history and winning decisively in London last summer, Grevers is once again a favorite to contend in Barcelona.  The second spot? David Plummer is in a good position to take it.  Nick Thoman hasn’t competed since winning a pair of medals in London.  Ben Hesen (fourth place at Trials, just 0.17 away from the Olympic team) looks like he’s done.  But Plummer will have his hands full with a few wily veterans and a slew of up-and-comers looking to score an upset bid.

Even with the potential for a post-Olympic lull, reigning Olympic champion Matt Grevers of Tuscon Ford Dealers is still the man to beat.  His lifetime best (52.08, swam in Omaha last summer) is almost a full second faster than the next fastest active American (David Plummer), and he’s been under 53 seconds six times in the last year, a standard no other American has cracked more than once in a textile suit.

After a disappointing 2010 U.S. Summer Nationals that left him off the 2010 Pan Pac and 2011 World Championship teams, Grevers has reestablished himself as one of the horses to carry Team USA through the next quadrennial. Although Grevers has admitted his training this season hasn’t been as intense start-to-finish as 2012 (he took a break after London, he’s been trying new things in his training regiment, and got married this spring), he’s been training and competing regularly since the fall, highlighted by a triple-gold-medal performance at the Short Course World Championships and some brilliant swims at the AT&T Winter Nationals.  Don’t read too much into his recent in-season times; the 6’8″, 230-pound Grevers is known to be a taper monster.

With Thoman and Hesen out of the picture, this is David Plummer’s spot to lose.  Plummer had a breakout swim at the 2010 U.S. Summer Nationals, upsetting Grevers, Thoman, and Aaron Peirsol for the win, earning him a spot on the 2010 Pan Pac and 2011 World Championship team (he finished fifth in the 100 back at each meet).  The former Golden Gopher finished a gut-wrenching third in Omaha last summer (in a race where the top six would have qualified for every other country in the world), but is back in the water for another go-round.

Despite being more than a half second faster than the next best swimmer on the psych sheet, expect that gap to be closed by a number of familiar names in the field.  Eugene Godsoe of Stanford Swimming, who finished fifth at Olympic Trials last summer, is the fastest returner behind Plummer and Grevers.  After training with David Marsh at Mecklenburg Aquatic Club through Trials, Godsoe has returned to Palo Alto to serve as a postgraduate assistant for the Stanford men, while training full time under Tony Batis, Ted Knapp, and Scott Armstrong.  He captured the 100 back NCAA title for the Cardinal in dominating fashion back in 2010, and he has made big steps in improving his long course swimming.  After a very strong effort in Omaha, he posted some incredible short course times in his top five individual events (the three backstrokes, 100 fly, and 100 free) this winter.

Although Godsoe is the third quickest American who competed in this event at Trials, eleven-time Olympic medalist and backstroke extraordinaire Ryan Lochte actually posted a faster textile time back at the 2007 World Championships, where he dropped a 53.50 to earn a silver medal.  Why are we discussing Lochte when hasn’t attempted to qualify for an international team in this event since 2008?  Unlike previous years, he doesn’t have an individual event conflict this year at Trials, and the schedule in Barcelona lines up in his favor.  There is a lot of speculation as to which events Lochte will attempt, but we won’t know anything until next week in Indy; he been keeping his plans close to the chest.

If Lochte chooses to swim the 100 back, he will be competing against two athletes a decade younger than himself: Jack Conger and Ryan Murphy.  The recent high school graduates posted the fastest pre-collegiate yards times in history this winter, with Conger (45.32) barely clipping Murphy (45.34).  However, Murphy appears to be the more polished long course 100 at this point; he finished two spots ahead of Conger at Trials last summer (they finished sixth and eighth, respectively), and has the faster LCM time.  Conger and Murphy are two of the most promising young swimmers that have come up through the ranks in a long time, and should be consistent names for Team USA for years to come.  As they head to different universities this fall (Conger to Texas, Murphy to Cal), we can expect some incredible races between the two rivals over the next four years (and likely beyond).

Look for backstroke specialist Drew teDuits of Wisconsin to build on his breakout short course season and make a push for the A-Final.  The Madison local from Edgewood High School exploded onto the scene with his convincing win in the 200 backstroke at NCAA’s, and has continued to roll in the long course pool this spring, swimming the fastest times in both backstrokes at the Charlotte UltraSwim in May.  teDuits will enter Trials next week as the third fastest American in the 100 back in 2013.

We’ve previewed five other men’s events so far, and David Nolan’s name has already came up three times (see the 200 IM and 100 fly preview for more).  At the risk repeating ourselves, we’ll keep this brief: Nolan looks like he’s starting to become the swimmer we imagined he could be after watching some of his high school performances.  His best time is 55.10 from all the way back in April 2011, but rumors out of the Stanford camp indicate Nolan has shown vast improved in the long course pool this season.  His chances to make an international team are probably higher in a couple of his other events, but he is more than capable of getting into the A-Final.

Three other familiar names from the college ranks should be mentioned: Jacob Pebley of Cal, Kyle Owens of Auburn, and Mitchell Friedemann of Arizona.  Owens is a returning Trials finalist from a year ago, but he has yet to compete in the long course pool this season.  Pebley and Friedemann were semifinalists in Omaha, and both are just a step away from making waves.  Pebley really improved in his freshman campaign at Cal, and likely has a better shot at sneaking into the A-Final.  He’s the seventh fastest American thus far in 2013.

Matt Grevers and Jack Conger going to Worlds would make this poster happy.

I want Murphy to make the team, but I think the veterans will prevail.

I think it would be neat if both Conger and Murphy made worlds. I have to imagine they would be roommates, that’s a funny thought. I don’t think both will qualify, but think it is likely one of the two will.