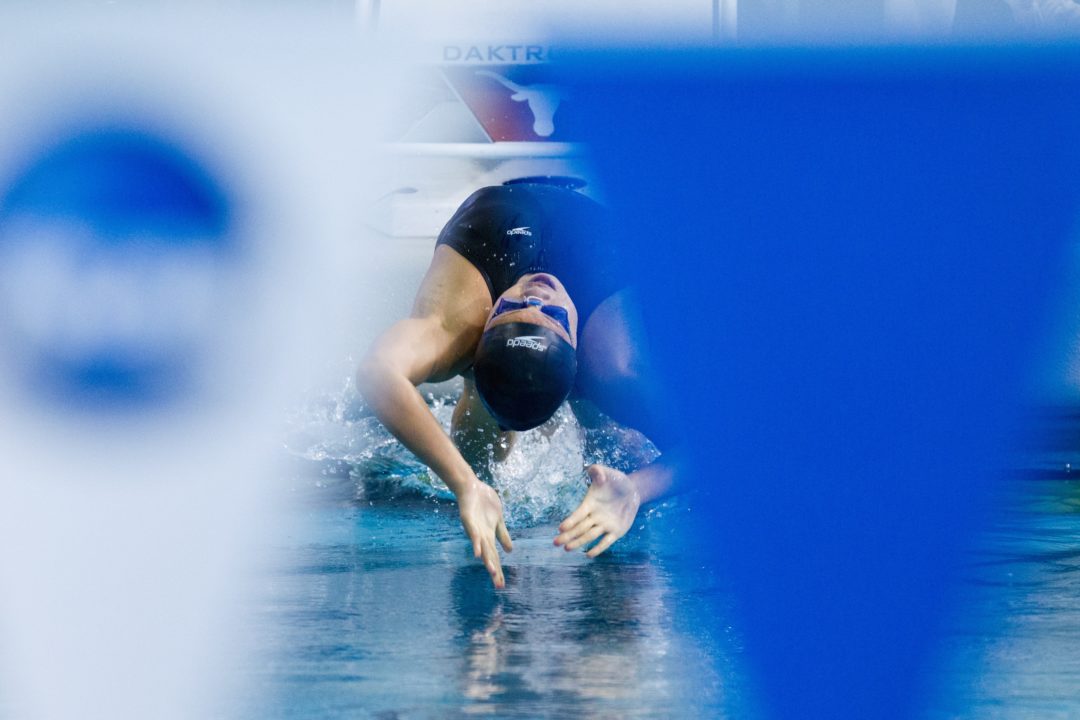 Cal has a lot of options in this 200 medley relay, including using Cindy Tran on either the backstroke or butterfly legs. (Photo: Tim BInning/TheSwimPictures.com)

There is no more peculiar, or perhaps spectacular, race in swimming than a 200 medley relay in short course yards. All four strokes are represented, sure, but you’d be lucky to see about 10 actual cycles of each. This race is all about who has the best exchanges, who has the best twitch in their muscles, and who is the best underwater.

(Enter our Pick ‘Em contest here to select your own favorites. We believe we’ve worked out all of the technical issues, but if you want to confirm receipt of your entry, email me [email protected])

It was highly unusual, then, the margin by which Cal won this relay last year. They swam a 1:34.24 to cut eight-tenths of a second off of the NCAA Record. They graduated their killer anchor Liv Jensen as well as Colleen Fotsch, who you might be surprised to learn had the fastest 50 fly split in that final last season.

The key to the relay this year is junior Cindy Tran. She’s the two-time defending champion in the 100 backstroke, and last year put the Golden Bears out to a huge early lead. That is, if she’s left on that backstroke leg. Teri McKeever still has a lot of options for this relay, though the most logical grouping has her on the backstroke, Leverenz on breaststroke, Bootsma on butterfly, and somebody on anchor, With that being said, their season-best time is from mid-season, with Bootsma swimming backstroke and Tran on fly. Both swimmers are naturally backstrokers who have made big improvements in their butterflies this season.

The anchor is big for the Golden Bears is important too. They have some good sprinters; more specifically, they have some very talented sprinters. But they’re going to need better than the 22.27 split they got from Rachael Acker at Pac 12’s. Kaylin Bing could be an option, and we saw Acker warm-up as the meet went on so she herself would presumably be at least a 21-high at NCAA’s. Maybe they could even consider putting Liz Pelton on backstroke and moving Bootsma and Tran around as a possibility.

We could spend all day picking apart this Cal relay, but this year they enter as only the 7th seed. The top three teams so far all come from the SEC Championship meet. There, Tennessee was a 1:35.08 thanks in large part to the contributions of their sophomore breaststroker Molly Hannis who had an amazing start to out-split A&M’s Breeja Larson: the best breaststroker in yards history.

Florida and A&M tied for 2nd-place at that meet. The Aggies were there without Lili Ibanez as their anchor. That puts them in the same position as Cal. In fact, Erica Dittmer had exactly the same split as Acker did: 22.27. If Ibanez was the anchor, the Aggies could be NCAA Champions. Without her, they’re looking probably in the top 3 somewhere.

Florida, quite frankly, was not very good in this relay last year. Even with Sarah Bateman and Elizabeth Beisel in the lineup, they couldn’t get into either the A or B final at NCAA’s. As has been the story of the Gators this year, though, their freshmen along with the return of Ellese Zalewski makes this almost an entirely new team. Natalie Hinds has come further than anyone expected as a freshman, even with her lofty prep resume, and Hilda Luthersdottir had a great SEC meet. She can’t go the 28.00 she did in prelims at NCAA’s last year. She needs to be a 27-low like she was in College Station a few weeks ago for the Gators to place high.

USC, also thanks to freshmen, are in the fray as well. Just like Florida, the Trojans’ sprinting is miles ahead this season of where it was last year. Kendyl Stewart and Kasia Wilk make a good back-half, especially with Stewart proving to be arguably the country’s best butterflier this year, and Carlson is one of the best in the 50 breaststroke when healthy. They need Joan Simms to do something very good on the backstroke leg.

Arizona lost their backstroke leg to transfer in this relay, but thanks to Lauren Smart’s ability to shift from fly to back, and the incoming transfer of Megan Lafferty, they are every bit as good as their runner-up relay was last season. Auburn, with a glut of breaststrokers, is still a very good relay as well (even with Arianna Vanderpool-Wallace graduating).

Stanford, using Maddy Schaefer on their butterfly leg and with Felicia Lee healthy, enter the meet as the 8th seed. Texas has as good of a front-half as anybody with Sarah Denninghoff (the previously mentioned Arizona transfer) leading off, and breaststroker Laura Sogar having a career year. Their back-half of Kelsey Amundsen and Ellen Lobb are a very good, but still underrated, back-half; they’ve swapped positions from NCAA’s last year, but aside from that, all four swimmers return after they were 9th last season.

Minnesota is a much better relay thanks to no graduations (a theme for this team) and Haley Spencer’s new-found speed at Big Tens. Indiana’s Brooklyn Snodgrass can keep up with even the impressive West Coast backstroke crew.

There’s a lot of good darkhorse picks in this meet. Arkansas has three sophomores and a freshman on their relay, and have demolished their own school record in this event. Mike Bottom has the Michigan women swimming very well, especially breaststroker Angie Chokran and freestyler Deirdre Jones. Penn State should be much better than their 1:37.97 from Big Ten’s in this relay; UNLV and Virginia Tech have very fast back-halves; Miami through their middle 100 have a pair of individuals who should be All-Americans.

This won’t be a great relay for Virginia, which will hinder their fight for a top-10 finish early in this meet. At SEC’s, it wasn’t a great relay for Georgia either, but that’s where the big wrench comes in this whole thing. Do they pull Megan Romano off of one of the free relays to boost this 200 medley? They’re seeded just 16th coming into the meet, and though no one relay is a deal-breaker, it will be hard to win the NCAA title getting only single digit points from this 200 medley.

The math says that by putting Romano on the backstroke leg of this medley, they go from a high-B finalist to a mid-A finalist, at least. That’s +16 or so points. The most they risk by dropping her off of the 800 free relay is 10 points, but they would probably still win that relay anyway. The math seems to make sense to make the move; now that they know that freshman Chantal van Landeghem can flat-start a 21.90, they know they can make up about half-a-second on that leg alone.

We’ll make our pick on the expectation of Georgia changes coming, but the only people who know that answer for sure are those in the Bulldogs’ inner-circle.

Darkhorse: Ohio State, 1:37.89 – the Buckeyes have a really special senior class graduating this year, and four of them are on this 200 medley relay. If they hit their prelims swim this year, then they could maybe sneak as high as the top 6 in this race.

Good read. Besides Liv Jensen, Cal’s relays are also missing as you mentioned, Colleen Fotsch and Katherine Raatz. Those seniors were invaluable to Cal last year along with Isakovic and Harper. Though Cal has only one senior this year, in Leverenz….repeating is going to be a huge challenge for them.
Both their sophomore and freshmen classes are going to need to step up big in order to make up for last year’s senior graduate contributions and also these younger Bears are going to need to understand that NCAA’s is a meet, unlike any other that they’ve been too.

I think Cal will get Kaylin Bing down to a 21.6-ish split but it will be a dead heat with Tennessee and Arizona.

I think Georgia will let this one go and won’t stack with Romano. Van Landeghem swam backstroke at SC Worlds and maybe she could do back with Locus on free?

With her big 3 first swimmers (Cindy Tran, Caitlin Leverenz and Rachel Bootsma) Cal should make the difference and have enough advantage over Arizona before the freestyle leg of Margo Geer. I see Cal with the win.