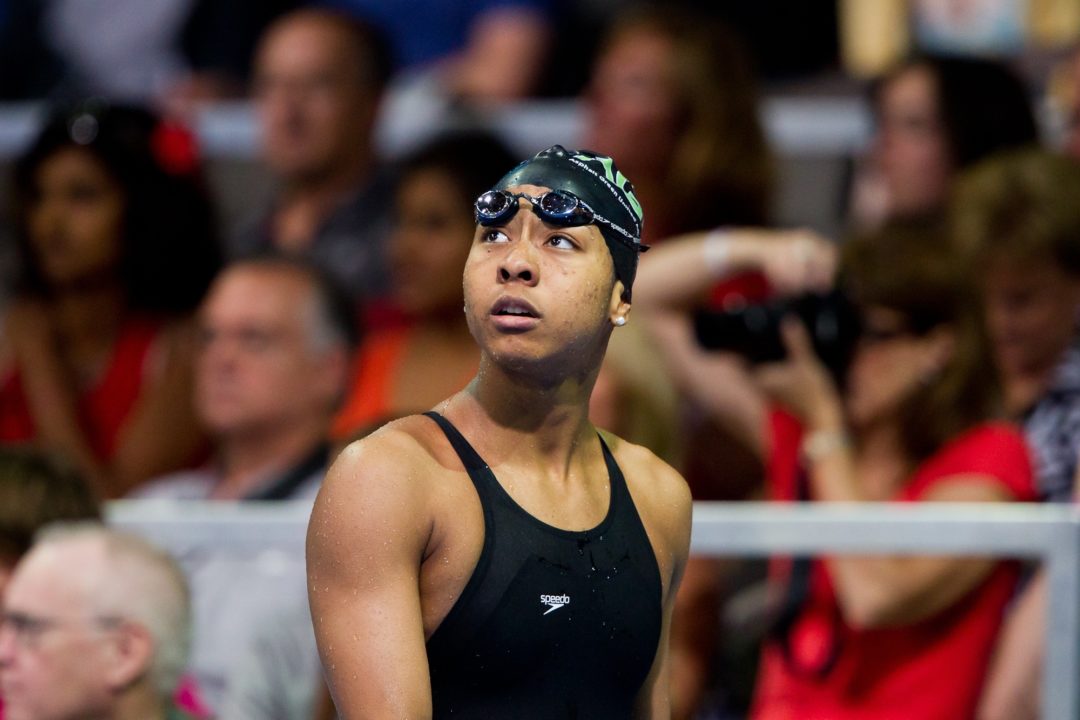 Lia Neal will be looking to bounce back from a disappointing World Championship Trials with a strong performance at this week's U.S. Open.

With all of the crazy fast swimming going on over in Barcelona, it’s easy to forget that there is a pretty big meet stateside this week.  The 2013 U.S. Open kicks off tomorrow at the William Woollett Jr. Aquatics Center in Irvine, California, and despite the absence of this year’s World Championship team, there will still be plenty of talent around the pool deck over the course of the five day meet.

Unlike the yearly Summer Nationals/qualifier meets where international athletes have not been allowed to compete in both prelims and finals, the U.S. Open is… well… “open” to everybody who qualifies.  As a result, there is a slew of big-name international swimmers, including many from Australia  (headlined by Yolane Kukla, Alexandra Purcell, Bobby Hurley, and Travis Mahoney) and South Africa (Darien Townsend, Sebastien Rousseau, and Dylan Bosch).  Danish Olympian Anders Nielsen, who trains collegiately at the University of Michigan, will also be swimming.

What to Watch For:

The opening men’s event of the meet will also provide us with our first look at three high school stars once ranked in the top five all time in their age group: Justin Wright, Corey Okubo, and Clark Smith.  Wright made waves earlier this year at the Santa Clara Grand Prix, where he won the 200 fly, recording the fastest pre-Trials time of any American in the process.  His 1:57.90 at that meet was the second fastest ever for a 15-16 swimmer (notably, Wright has since turned 17), behind only some guy named Phelps.  Wright, though, elected to skip World Championship Trials last month to focus on qualifying for the American Junior World Championship team, surprising a lot of people who considered him a contender in the event.  He’s seeded third this week in Irvine, behind Bobby Bollier and Sebastian Rousseau.

Okubo is just behind Wright on the psych sheet, seeded at 1:58.58.  The 17-year-old from the Aquazot Swim Club finished second at the 2012 Junior Pan Pacs last summer, becoming the third fastest performer all time in the 15-16 age group (Phelps and Dan Madwed are were front of him, and he has since been jumped by Wright and Andrew Seliskar).  Okubo didn’t have the best World Championship Trials (he finished 12th in 1:59.31), but it’s hard to tell if that was his big “focus meet” of the summer.

Rounding out the trio is Clark Smith from the Denver Swim Academy/Longhorn Aquatics.  Smith, who is seeded fifth at 1:58.64, has showed continued improvement over the last 18-24 months, highlighted by his 46.54 short course 100 yard fly earlier this year at the Colorado High School Championships (just 0.04 off the National High School Record).  Back in 2011, the then-16-year-old Smith posted a 1:59.33, good for (at that moment) fourth all time in the 15-16 age group.

Although Okubo swam at World Championship Trials, we haven’t heard from Smith and Wright in a while.  The expectation is that they will all be fully rested for this meet.

In a bit of a surprise finish last month at World Champion Trials, both Lia Neal and Amanda Weir failed to make the A Final in the women’s 100 freestyle, effectively locking them out of the 2013 World Championships team.  Neal and Weir both won bronze medals on the women’s 4×100 freestyle relay last summer in London, with Neal swimming on the finals relay with Missy Franklin, Jessica Hardy, and Allison Schmitt.  Neal, who will be a freshman at Stanford this fall, was (and still is) widely viewed as a large piece of the future of American sprinting.  Weir, meanwhile, is the American and Championship Meet record holder in this event, and after a couple of down years, it looked like she had gotten her groove back.  To see them both take a step back was a bit of a surprise.

While the Open will be an interesting test to see who can shake off the disappointment and keep their head in the game, there is more at stake than just pride; this is the last big meet for swimmers to qualify for USA Swimming’s APA funding for the 2013-2014 season.

The two will also battle it out in the 50 freestyle, where they will receive big challenges from two-time Olympic Trials finalist and National Teamer Madison Kennedy, Australia’s Yolane Kukla, and Wisconsin upstart Ivy Martin.

Excluding Katie Ledecky and Chloe Sutton (who qualified for Worlds), four of the top five swimmers from World Championship Trials in the women’s 400 freestyle will be swimming at the U.S. Open: Leah Smith, Gillian Ryan, Haley Anderson (all indications are that she will be swimming), and Lindsay Vrooman.  That doesn’t include fifth-seed Amber McDermott (runner-up in the 500 free at NCAA’s, fourth in the 1650), third-seed Sarah Henry (second faster performer ever in NCAA competition in the 500 free, runner up in the 1650 at NCAA’s), or seventh-seed Quinn Carrozza (finalist in the 200 freestyle at World Championship Trials).

The 800 freestyle is even more ridiculous.  Check out the seeds, compared to their finish at the 2013 NCAA’s…

Moral of the story: don’t miss these races!

4) Tons of subplots in the men’s backstroke races

In his first full-taper meet since announcing he would forgo his future NCAA eligibility and become a professional swimmer, Michael Andrew will be competing in the 50 and 100 freestyles, looking to lower his own national record in the 50 and possibly become (one of?  the?) youngest male qualifier for the National Junior Team ever.  Andrew already clipped the 13-14 boys National Age Group record earlier this fall in the 50 free, but has plenty of room to move up in the 100, where his 52.88 is just 13th on the list.

At just 14 years old, Andrew will be the youngest male competitor at the meet, and one of just three athletes under the age of 16 (Brad Gonzales of Irvine Novaquatics and Maxime Rooney of the Pleasenton Seahawks are the other two).  Should he post a fast enough time in either sprint event to put him in the top six 18-and-under athletes from summer championship meets, he will be contention to qualify for the National Junior Team before the age of 15.

…But we don’t really know what to expect.  McGill has been a little off his game for all of 2013, but he is the top seed, and all indications are this is his last big meet for a long time (he starts a full-time coaching gig this fall at his alma mater).   Shields looked like he had arrived on the long course scene with a great 200 fly at World Championship Trials, but his sprint flys were below expectations.  Phillips has been up and down for the last two years, but showed he can still contend with a third place finish in the 100 last month.  Dunford took a long break after a disappointing Olympic Games, but has been training regularly with Stanford’s postgrad group, and we know how that has worked out for some people.

i want to see tyler swim a time that would medal at worlds. i heard he mistimed his trials taper so should be better able to perform with some extra weeks of training

I like the way you formatted this article… very professional!

If I missed something or am offbase, my apologies

Allison Schmitt is not in hard training, it seems that she has decided to take some time off after her under par performance in the world trials. Possibly post olympic slump. She is probably not mentally prepared.

As far as I know, in whatever future meet with relays you would still have to time trial to qualify for a relay so I would not think that it will effect Cullen’s chances for future relays.

Yes, Bobo, and this doesn’t make sense. If someone has a breakout performance in 2015, he or she does not get that international experience on the biggest world championship stage going into the Olympics.

Ok, so give me the official reason of the US national team director for that decision. I want to know it.