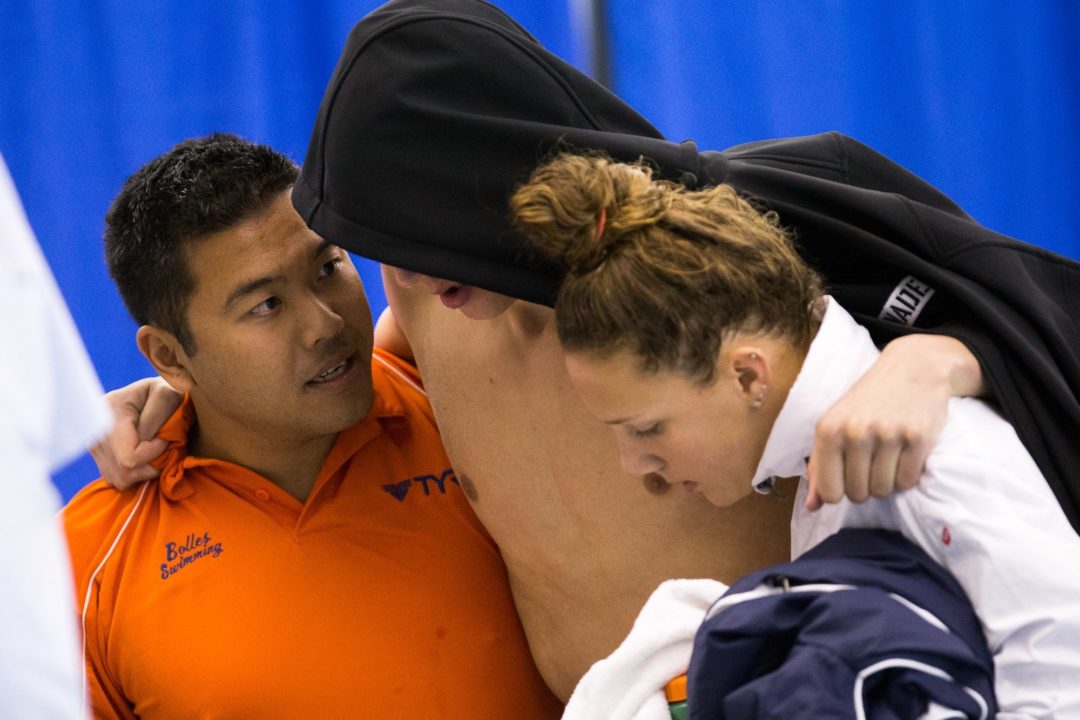 With the figurative, and sometimes quite literal, support of his coaches like Jason Calanog (left); along with his family like younger sister Sheridan Dressel (right), Caeleb Dressel (center) put up the most eye-catching swim of 2013 at the Winter Junior National Championships. Archive photo via Tim Binning/TheSwimPictures.com

It’s time to begin our 2013 Swammy Awards, where we honor the best, brightest, and most noteworthy achievements in our sport over the last calendar year.

We use a combination of the amount of traffic a certain swim got, the amount of comments the story got, and the number of times we were approached on deck to talk about the swim.

This year, the winner was a bigger runaway than we expected going into it: Caeleb Dressel’s record-breaking 18.96 at the Winter Junior National Championships in Greensboro, North Carolina was the buzziest swim of the year, and for that he receives the SwimSwam Buzz Award.

When reviewing our yearly traffic to try to come up with a ‘short list,’ I was stunned at the traffic gap between Dressel’s 18.96 200 free relay lead-off from the first boys’ final of the meet and every other race-themed post. In fact, it received roughly 50% more views than Vlad Morozov’s sub-18 second relay split, which is one of the honorable mentions for this award, and more than twice as much as Kevin Cordes’ 1:48 in the 200 breaststroke from NCAA’s. And Dressel’s swim was only a few days ago, whereas most of the swims on our list came much earlier in the year and have been racking up months of traffic.

At only 17 years old, he became the first junior to ever crack 19 seconds in the 50 yard free. He broke his own National Age Group Record once again, and even more impressively bettered the 19.06 that Russian Vlad Morozov had done as a freshman at USC when he was 18.

That 19 second barrier, though, is a really magical one. Being able to put an 18 in front of his time is what made this swim such a big deal. He’s only the 19th guy at any age to go under 19 seconds in the 50 yard freestyle. The names on the list of those who have done it are huge: Adrian, Morozov, Grevers, Feigen, Wildman-Tobriner. The list of guys who have come close and just missed makes it equally impressive; guys like Ervin, Dunford, Duje Dragna, and Cullen Jones.

And now, Dressel, in his freshman year at Florida next year, will enter the season as the favorite for the NCAA title in the 50 free. That doesn’t happen often in men’s swimming, and certainly not in men’s freestyle sprinting.

Watch the race video below, and after that see an interview that Garrett McCaffrey did with Dressel after his award-winning swim.

Lots of great performances to choose from. 2013 has been a fantastic year for Age Group and High School swimming in the USA. Tremendous upside.