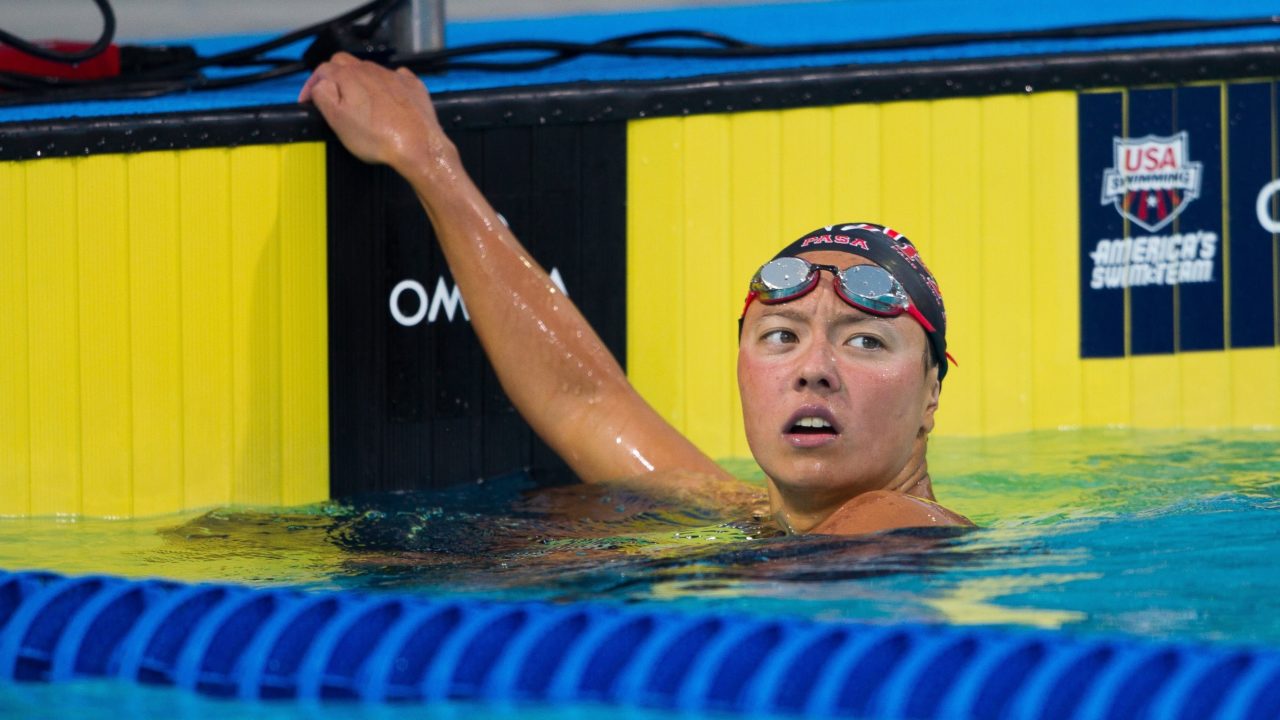 USC freshman Jasmine Tosky (above) will almost break-even, including relays, on the number of points lost by Katinka Hosszu's graduation; everything else is gravy. (Photo Courtesy: Tim Binning/TheSwimPictures.com)

The beginning of the Pac-12 marathon, 8-straight days of swimming and diving for those coaches of combined programs, begins on Wednesday in Federal Way, Washington.

It’s worth pointing out that even with the men’s meet moving from Belmont to Federal Way, where divers could just as easily compete simultaneously with the men’s swimmers, the Pac-12 has decided to leave all of the diving during the women’s meet. That will disrupt as few training schedules and travel schedules as possible with the northern move of the men’s meet.

Fortunately, most of the men’s teams will arrive on Friday for their meet that begins Sunday, meaning that they’ll at least be able to cheer on their divers for a large portion of the competition. (Coaches of the combined teams requested that arrival be on Friday rather than Saturday, as it would be hard to go and pick them up during the afternoon miles on Saturday).

Anyhow, on to this women’s meet; not that the Pac-12 meet is what anybody remembers of this burgeoning dynasty, but in the four-year run that has seen Teri McKeever’s squad win three NCAA titles, only two of those have overlapped with Pac-12 titles.

There’s also a lot of mystery, and excitement, about Greg Meehan at the helm of Stanford. We’ll see if he can translate the chemistry he and Dave Durden used with the Cal men’s team into success with the Stanford women. This was only a 40-point win for the Golden Bears last season, ahead of his Cardinal, though remember that both teams have graduated really good sprinters. USC was a little bit behind Cal and Stanford at last year’s meet, but they appear to be a lot deeper this year than they were last year, even if Katinka Hosszu is graduated.

100 breaststroke – It’s safe to assume that even short of a taper, Cal’s Caitlin Leverenz will win the 200 breaststroke (though perhaps USC’s Andrea Kropp has what it takes to push her there). This 100, though, could be a really good race between USC’s Kasey Carlson and Arizona’s Ellyn Baumgardner (Leverenz probably won’t swim this 100, though she’d be in the battle if she did). Carlson has been lights-out this year, in a bounceback from last season. Baumgardner is actually the fastest in the conference in the race with a 58.8 that will get her into NCAA’s even with women’s breaststroke times plummeting this season. Last year, Baumgardner dropped at Pac-12’s (not everyone at Arizona does, as their well-told strategy is to taper mid-season and train through Pac 12’s). If she does rest for this meet again, we could see two below 58.5.

200 medley relay – I think Cal has an advantage in the longer 400 medley relay. In this 200, though, Arizona and USC have the pure-speed to hang with the Golden Bears. Among the head-to-head matchups we’ll get: Carlson vs. Baumgardner vs. Leverenz on the breaststroke; Stewart vs. Tran vs. Lafferty on the fly; Geer vs. Acker vs. the lesser-known, but very good, freshman Kasia Wilk from USC. I see it playing out with Cal in the lead after backstroke; Arizona and USC pulling even on the breaststroke; pretty-much a dead-heat on the butterfly; and then a full-blown battle for the finish on the freestyle anchor. It’s amazing how much better USC’s 200 relays have gotten in just one year. At NCAA’s, I like Geer in that battle-to-the-wall; at this meet, I’d take Cal. Unless, of course, Stanford comes in with their very young, very eager relay and the aforementioned healthy Felicia Lee and overturns the whole thing.

100 fly – We still aren’t quite sure who’s going to be in this 100 fly yet instead of the 100 back, as there are a lot of teams who have swimmers with NCAA A-Final potential in both races. But I envision this race being something like a battle between freshmen Rachel Bootsma and Kendyl Stewart, freshman Rachel Bootsma, maybe NCAA backstroke champ Cindy Tran and her amazing underwaters, Arizona’s Lauren Smart, Arizona’s Megan Lafferty, UCLA’s Ting Quah who is tearing-up their record books, Arizona State’s anchor Caroline Kuczynski, Stanford’s Felicia Lee, and maybe USC’s Jasmine Tosky. And that’s just the beginning. I don’t think anyone would be surprised if we saw five go under 52 seconds; I also don’t think anyone would be too upset if we saw 9 or 10 from this conference score at NCAA’s.

This is a really tough one to peg out. Cal has a great team for NCAA’s, but are they deep enough to win this meet this year? This is a C-Final-scored meet, and as mentioned above, in 2011 they lost Pac 12’s but won NCAA’s. Stanford lost two of the top sprinters in the conference, which hurts their relays, but their breaststrokers are better. USC is just a way deeper team overall than they were last year, even without Katinka Hosszu, and the addition of Jasmine Tosky and Kendyl Stewart is probably worth close to 100 points alone.

USC still has the best diving group out of the three teams, though Stanford and Cal are both doing a good job of building their’s by bringing in good recruits. No more Tori Ishimatsu for USC, but her younger sister Haley, who is also a star, is returning from redshirt.

It seems strange, after what they lost, but I’m going to take the USC women this year, followed by McKeever’s squad and then Stanford 3rd. Arizona should be 4th, though based on scheme (versus talent), UCLA could give them a run for that spot.

Utah is pretty firm in 7th place. 8th could be an interesting battle; neither team has divers on their roster, and Oregon State took 8th last year, but Washington State pulled off the win in the dual meet earlier this season, so we’ll pick them for the slight edge. Any DQ’s at this meet could drastically shake up the standings, though, so it will be important for everyone to stay legal on their exchanges.

Can we watch this meet somewhere? It would be cool. There are so many big names.

Heard about Breed’s ACL, but DiRado missed the Cal meet. Is she completely healthy?

Dirado had a touch of food poisoning for Cal meet. Nothing to be concerned about.

Pac-12 TV everywhere except on DirectTV

Is it live or tape-delayed?

She is probably just over entered to keep her options open