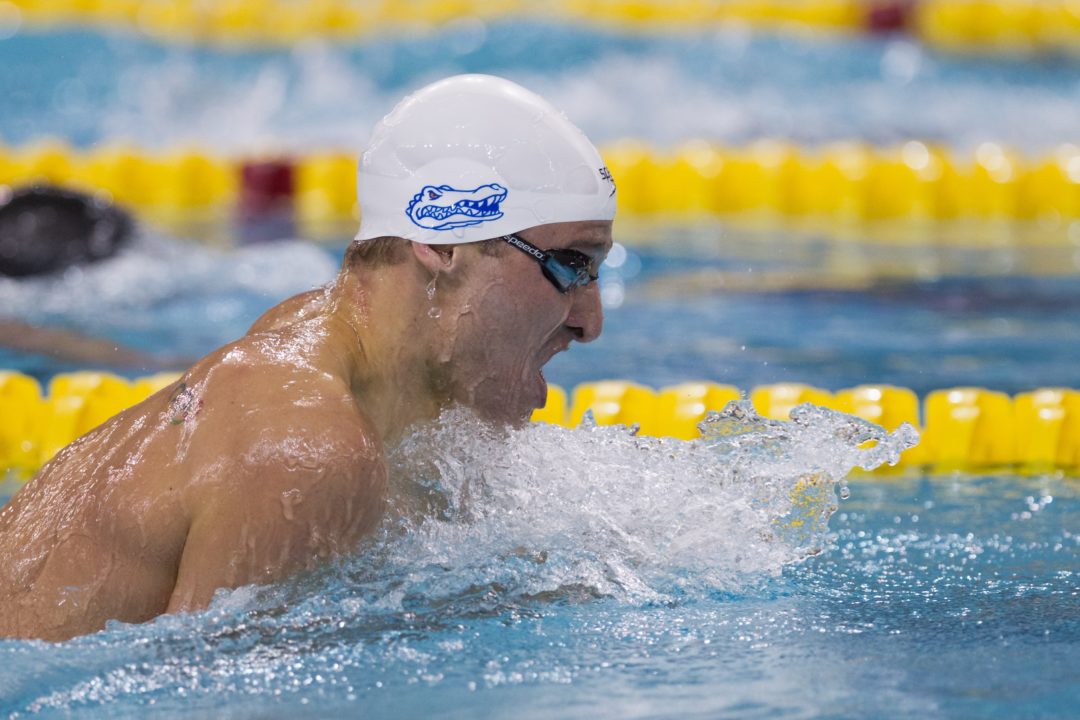 The return of Sebastien Rousseau makes the Gators a threat to end Auburn's streak of 16-straight. (Photo Courtesy: ©Tim Binning/TheSwimPictures.com)

There’s something about men’s swimming conference championship meets and streaks. Unlike women’s meets, where the winners tend to bounce around a few times a decade, men’s programs seem to go on long, long streaks. In the last 16 years, there has been only one Pac 12 Champion (Stanford), only one Big 12 Champion (Texas), and only one SEC Champion – Auburn.

This one is particularly special; in part because it’s been so hard-fought over the years, and in part because their coach Brett Hawke was a freshman on the team in 1997 when the streak began and has been with the program, more-or-less, ever since in different capacities. Even compared to Eddie Reese and Skip Kenney, that’s a truly unique experience.

There’s a chance that this streak will be in jeopardy this year; in fact, it may be the most vulnerable of the three mentioned above. The Florida Gators were only 30 points behind, and getting Sebastien Rousseau back, plus some high impact freshman, in the least chips away at the certainty of another Tigers win.

The new teams for the SEC men, Missouri and Texas A&M, won’t have quite as big of an impact as they will on the women’s meet, though both teams do have some impact swimmers. Auburn and Florida are clearly the “mature” teams in this league, as everyone else seems to be very much in a “building mode,” and doing it very well at that.

The SEC swim teams, which like everything else SEC is historically known for speed, has a great distance group all of a sudden. 4 of the top 10 from NCAA’s in the mile last season will swim in this meet – more than any other conference championship.

Remeber that the SEC is going to a new 5-day schedule this year. That should absolutely affect the outcome of the meet, especially for anybody who is attempting the 100 fly/100 back double – those races are now well spaced out.

Alabama – BJ Hornikel (junior freestyler), Brett Walsh (freshman freestyler), Brian Westlake (freshman freestyler), Anestis Arampatzis (senior butterflier) – Hornikel is the team’s lone returning All-American and the centerpiece of this team; he always has a huge taper.
Auburn – Marcelo Chierighini (junior sprinters), James Disney-May (junior freestyler), Zane Grothe (junior distance freestyler), Kyle Owens (senior backstroker) – This is a veteran team that knows how to show up when the meets count. Their internationals won’t have Olympic Trials to deal with this year, either.
Florida – Bradley deBorde (junior sprinter), Sebastien Rousseau (junior Mid-D everything), Pawel Werner (freshman freestyler/sprint butterflier), Marcin Cieslak (junior butterflier), Arthur Frayler (freshman distance) – This Florida team is much-better built to contend for the title than their very young team last season was. Their relays could be very good.
Georgia – Nic Fink (sophomore breaststroke/sprint), Doug Reynolds (junior butterfly), Matias Koski (freshman freestyler), Chase Kalisz (freshman IM’er), Martin Grodzki (senior distance), Andrew Gemmell (junior distance) – As you go through this roster, you realize just how many stars are on this Bulldog team. The young freshman will likely be shaved and very tapered for SEC’s, so noise will be made. Our sources say Grodzki will be available for SEC’s, despite missing several recent meets, but many around the country still aren’t confident about that. We’ll find out soon enough.
Kentucky – Lucas Gerotto (sophomore backstroker/butterflier), Chris Lott (junior sprinter), John Fox (senior diver), Corey Cowger (junior diver); Tyler Reed is gone, but a new star is emerging in Gerotto. Wildcats will also score big in diving.
LSU – Craig Hamilton (senior distance freestyler), Andrei Tuomola (senior breaststroker), Frank Geef (sophomore butterflier) – We think Hamilton will have his sights squarely set on NCAA’s this season, but it will still be fun to watch him mix it up with the Georgia boys.
Missouri – Sam Tierney (sophomore breaststroker), Jowan Qupty (senior breaststroker), Mack Darragh (sophomore butterflier), Eegan Groome (sophomore freestyler) – at the Missouri Valley Tiger Invite, a club meet, last weekend in Columbia, Missouri had 9 men go under 1:40 in the 200 free. In a single meet. In the conference, only Florida has had more than that from all of their meets combined.
South Carolina – Michael Flach (junior middle distance/fly), Cole Miller (sophomore diver), Kevin Lethold (freshman sprinter)
Tennessee – Ed Walsh (senior sprinter), Sean Lehane (freshman backstroker), Sam Rairden (junior sprinter/backstroker), Mauricio Robles (sophomore diver) – Tennessee has gotten hit-after-hit, but this semester are really settling in; they beat Georgia in a dual meet a few weeks ago, which will be a big confidence booster.
Texas A&M – John Dalton (senior freestyler), Hendrik Lindau (junior sprinter/butterflier), Omar Enriquez (junior distance freestyler) – Dalton has bona fied star potential; don’t be fooled by times, as the Aggies didn’t have a mid-season rest. Their 800 free relay could be their best, which is a strange thought.

200 Freestyle – This is always one of those races where you can’t be sure who exactly will swim it, but with the new 5-day SEC schedule, we might see some surprises. The 200 free no longer butts up against the 100 yard stroke races; though it does fall on the same day as the 400 IM, there will be a fairly significant gap between the two events, and no relays on that day. Just looking at the guys who are returning, Marcin Cieslak from Florida, BJ Hornikel from Alabama, and James Disney-May from Auburn should all be under 1:35. 200 fly Olympic Trials finalist Michael Flach was on an Olympic redshirt last year, and could also be better than 1:35. South Carolina’s Gerard Rodriguez is a good darkhorse pick in this: he has huge tapers. That whole SC 800 free relay could be very good in fact, maybe as high as 4th.

1650 Freestyle – As we noted above, lots of great names in this mile. Zane Grothe from Auburn, defending NCAA Champ Martin Grodzki from Georgia, Andrew Gemmell has looked much better in-season this year than he did last year, William Freeman also from Georgia, the Florida freshman Arthur Frayler…and there’s a chance that for scoring reasons, the conference’s best miler this season, UGA freshman Matias Koski (14:53) won’t even swim the race.

100 Butterfly – This could be a very good race…with a big IF behind it. Marcin Cieslak will probably swim this event at NCAA’s, but last year he chose the 200 free at SEC’s instead. Auburn’s Arthur Mendes has star potential and looks better each time he races, but still doesn’t seem quite adjusted to yards. Marcelo Chierighini is a prototypical sprinter/faux butterflier. The same goes for Florida’s international freshman Pawel Werner. Matt Ellis has the potential, and even though his last few meets haven’t been great, he should be shaved for SEC’s. The only guy who’s really a sure-thing to hit in this race is the defending champion Doug Reynolds from Georgia. After him, there’s a whole heap of guys who can be 46’s even at a conference championship with just a “rest”. This race will either be spectacular, or a spectacular flop.

Springboard Diving – Men’s diving in the SEC was very young, but make no mistake: there is a lot of talent here. With David Bonuchi joining from Missouri, things just get that much better. Greg Ferrucci at Kentucky, Mauricio Robles at Tennessee, John Santeiu at Auburn; there’s a lot of very good young divers in this meet, and a lot of points to be made-up or lost. Florida and Georgia will give up a lot of diving points to the likes of Tennesse, Auburn, and LSU toward the top of the rankings. The Gators could get a boost from redshirt freshman Zach Hernandez. He sat out last year, but was the Georgia State Champion the two years before that. Meanwhile, the Bulldogs only have a single diver on their roster.

Both Auburn and Florida got better this season. Last year, Auburn swept all 5 relays, including the 800 free relay where the Gators are often so good. Even had Florida won all of the relays last season, it would have left them half-a-point short in the overall standings. The Gators could get that 800 with Rousseau back, but other than that the Tigers should dominate the relays again.

These teams are really evenly matched in terms of scoring load. Auburn tends to get more out of their divers, but Florida tends to get more out of the last few swimmers on their conference roster. This very well could be a meet that’s still in contention when the last relay takes off, but we’ll stick with Auburn just on the basis of history. Newton’s law of swimming streaks: the streak in motion tends to stay in motion.

Georgia lost a lot of SEC scoring swimmers after last season, but they also picked up a ton of depth in their freshman class. There’s only two seniors on this team, but there’s probably 8 freshman who can score at NCAA’s. They’ll need that depth to hold off Tennessee, especially when the diving deficit comes into play. Predicting how A&M and Missouri will come into that picture is tough, but A&M will be largely thinking about getting their relays qualified for nationals. The Tigers were getting close to the Aggies the last few years in the Big 12, and with a much, much larger conference, my gut tells me that will work more in favor of Missouri this season.

Toward the bottom-half of the conference, Alabama needs to look out for Kentucky; they graduated their best swimmer Reed, but also DQ’ed two relays (along with their women DQ’ing a third…the Wildcats hopefully spent a lot of time on exchanges this season). That’s a minimum 44 points if they’re legal. South Carolina is also +40 points, at least, right off the bat with Flach’s return. They only graduated 2 points and two relay swims.

The streak will end. Florida has a really good team this year and swimming fast. Always a great meet!!

Sebastien Rousseau is not a senior. He is a redshirt junior, and will have a year of eligibility remaining when this season is over.

Whose sources say Grodzki will be “available”? Usually if someone is ineligible that does not change in the same semester (even if its a big meet)

On the psych sheet