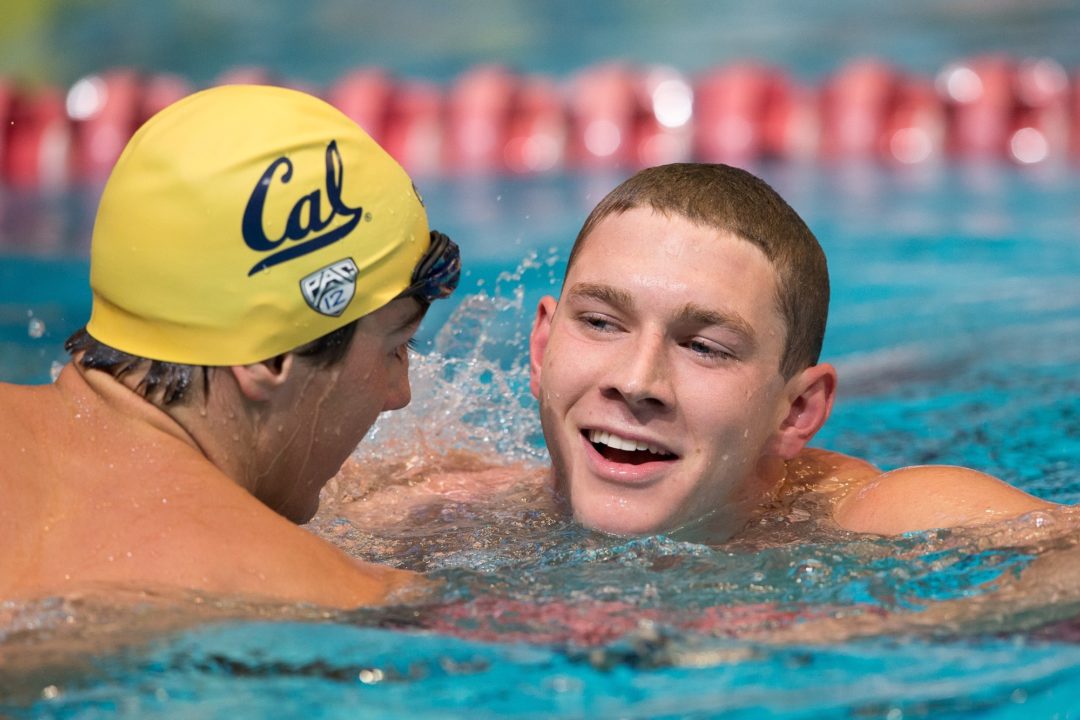 After watching the Michigan Wolverines walk away with the NCAA title a year ago, true freshman Ryan Murphy will look to bring the NCAA team title back to Berkeley.

After putting together a bit of an upset at the 2012 NCAA championships, the early national perception was that the 2013 meet was Cal’s to lose. They dominated a meet that was largely considered a three-team battle between Texas, Stanford, and Arizona, and although a few of their bigger pieces (Martin Liivamagi, Nolan Koon, Mathias Gydesen) were graduating, all of their individual points and relay slots looked to be immediately replaced by newcomers Tony Cox (Auburn transfer), Josh Prenot, and Jacob Pebley. With every base covered, the Bears were all but set for a three-peat.

Over the previous four years, Cal had built a reputation as the best-performing team top-to-bottom at NCAA’s. They had some amazing performances last spring, headlined by Tom Shields, who capped off a brilliant NCAA career with a his biggest workhorse effort to date, logging 13 swims over three days (including seven on day two) that netted 57 individual points, an American record in the 200 fly, and some crazy-fast relay splits. Prenot (three A-Finals) and Pebley (two A-Finals, one relay) were incredible, as well.

However, in order to beat Michigan without their best sprinter, the Bears needed to fire on all cylinders and have a few swimmers drop bombshells early on to set the tone (for example, Marcin Tarczynski upsetting David Nolan in the 200 IM in 2012). A few of their key athletes weren’t at the top of their game, and despite a bit of a rally on the final day of the meet, Cal ultimately came up short.

Boasting some of the world’s best underwaters, Tom Shields was a four-year force for the Bears, winning 11 NCAA titles in his career (six individuals, five relays). Without mincing words, he’s irreplaceable for Cal this year. That being said, between Marcin Tarczynski taking over the fly legs (he’s been sub-46 from a flat start), and their outstanding depth in some other events, such as the 100 back (Ryan Murphy, Tony Cox, and Jacob Pebley) and the sprint freestyles (Seth Stubblefield, Shayne Fleming, Fabio Gimondi, and Tyler Messerschmidt), Cal can withstand the loss.

Even though Shields was responsible for more points and relay swims, an argument could be made that the loss of Trevor Hoyt is almost as important, given Cal’s remaining personnel in the sprint breaststrokes. Hoyt is a four-time individual All-American, including a pair of top three finishes in the 200 breaststroke at 2012 and 2013 NCAA’s. He held down the second leg on both medley relays last year, turning in the third fastest splits in each field to keep the Bears within striking distance for Shields to close the gap on the fly leg.

In place of Hoyt, the Bears will look to Christian Higgins and Josh Prenot to carry the breaststroke torch. Higgins was one of the top breaststroke recruits in the country back in 2011, and although he has an incredibly amount of talent and has scored at NCAA’s in each of his first two seasons (13th in the 100 in 2012, 14th in the 200 last year), he has yet to display a ton of consistency. He hasn’t competed so far this season, and if there are underlying reasons for his absence (injury or sickness) that will keep him out of the water for an extensive period, Prenot could be the only elite breaststroker on Cal’s NCAA roster. That’s not the end of the world; Prenot is very good. However, he will have to pull a tough back-to-back on day two if he gets thrown on the 200 medley.

That being said, Cal has been known to have some breaststrokers come out of the woodwork (think Nolan Koon back in 2009). Keep an eye on Scott Haeberle or freshman Hunter Colbeigh to drop some big time.

It’s tough to call Tyler Messerschmidt an “arrival”, since he has previously competed for the Bears, but his return to Berkeley couldn’t have come at a better time if Cal wants to stand atop the podium in March. Back in 2012, Messerschmidt jump-started the Bears title-winning team with a superb freshman performance, taking part in two NCAA-winning relays, earning All-American honors in the 100 free, and scoring in his other two individual events.

Messerschmidt missed the 2012-2013 season for academic reasons, but he’s already proven he’s ready to reclaim his role for the Bears this season. After turning in lifetime best times at a sectional meet last March (his 19.25 and 42.32 in the 50 and 100 freestyles would have been 4th at NCAA’s, and his 1:34.17 200 free would have placed eleventh), Messerschmidt has already broken 45 seconds at multiple dual meets this season. He should score at least 35 individual points and be a critical leg on four relays for the Bears.

Last fall, Cal landed potentially one of the most important recruits in program history (right up there with Shields and Matt Biondi) in Ryan Murphy. The #2 ranked recruit in this class (and probably one of the top five recruits of all time) from the legendary Bolles School arrives on campus as a favorite to finish in the top three in (and possibly win) both backstroke events, and probably has another individual A final performance in him.

Although the rest of this freshmen class doesn’t boast the same credentials as Murphy (then again, few swimmers ever have out of high school), there are a few other new guys that—given Dave Durden’s proven track record of quickly developing sprinters—could be contributors this spring for a championship run:

While the Bears may lack depth in the breaststrokes, a stroke they have owned for the last few years, they are absolutely loaded in the sprint freestyle events. In addition to Messerschmidt, Cal has four other guys capable of splitting well under 19.0 and 42.5:

Stubblefield and Fleming were both individual All-Americans a year ago, and Gimondi has proven to be a monster relay swimmer in his first two years at Cal. Those three teamed up with Messerschmidt to win the 2012 NCAA title in the 200 freestyle relay out of lane 8, and have to be considered contenders in both the 200 and 400 free relays at this point. With Murphy and a couple other guys on the roster looking to steal a spot (Tony Cox split 19.30 last year), Durden will have the luxury of mixing up the free relay personnel. We haven’t truly seen the best from Murphy, either, who has been relegated to the leadoff legs for Bolles’ relays, and was focused primarily on the Short Course World Championships during last short course season.

We all know how good Murphy already is, but he’s just one of four All-American backstrokers on this roster. Jacob Pebley was top 8 in both backstrokes as a true freshman, and first year Bear Tony Cox led off both medleys, and turned in the fourth fastest 100 back= of the meet in his consolation final victory (45.46). Not to be left out, Marcin Tarczynski is capable of swimming a 45-high in the 100 back (he was 46.0 two years ago), and has also broken 1:42 in the 200.

After swimming the 100 back on day two during his two seasons, Tarczynski changed his mid-meet focus to the 100 fly. That shift will pay big dividends this year for Tarczynski, who will take over for Shields as Cal’s #1 flyer. While Tarczynski couldn’t duplicate his great 2012 NCAA meet, he still made two championship finals last season (100 fly and 200 IM, his best event), and will be a threat to score 40 or more individual points in his final season.

We’re running over the word count, and haven’t still haven’t discussed four other NCAA qualifiers (including an NCAA champion). Just speaks to the amount of talent this Cal has:

Despite the loss of their most valuable swimmer (Shields) and their clear #1 breaststroker (Hoyt), Cal has a great shot to come out of this season with a championship. While Michigan returns a boatload of individual points, the addition of Murphy and Messerschmidt, combined with the graduating Wolverine sprinters puts the odds in favor of the Bears. Pains me to say it, but if any of their breaststrokers can split at or under :24 and :52, I’m calling the Bears the favorite. That’s a pretty big caveat.

Thanks Morgan, it was a very nice read. I’ve started following cal swimming not too long ago, and looking at this season so far, didn’t think that they had such weapons. Comparing the times that michigan has put up so far, Cal still needs to improve a good amount. Hopefully by march, they’ll be ready to go. Knowing Durden, Cal will most likely be ready to take the title back! Go bears!
Looking at the “about moregan priestley” section, I feel like this must’ve been very objective.

you’re forgetting about Ryan Studebaker for Cal’s breaststroke leg who’s been a 53.4 off a flat start. with a year of training and a relay start he could definitely get 23 mid and the 52 low hoyt went on the relays at NCAAs

You have a point. We all know Prenot is very good at 200 breast, but we’ll see who goes faster in the 50 between Prenot and Studebaker.

Prenot won’t swim the 5o breast on the relay with the 4IM the next event at NCAA’s. Maybe the 100 but definitely not the 50 breast at NCAA’s!

Thanks for a comprehensive review, Morgan. If Braden can get people exiled to Denmark, what kind of leverage does he have on you to write favorably about Cal?

Of the newcomers, freshman Janardan Burns looks like a potential scorer in the 500 and JC transfer Henry Chung may be able to contribute on sprint relays.

With Messerschmidt back and Trent Williams coming on strong, Durden may be able to move Stubblefield into the 100 fly to pick up a few more points.