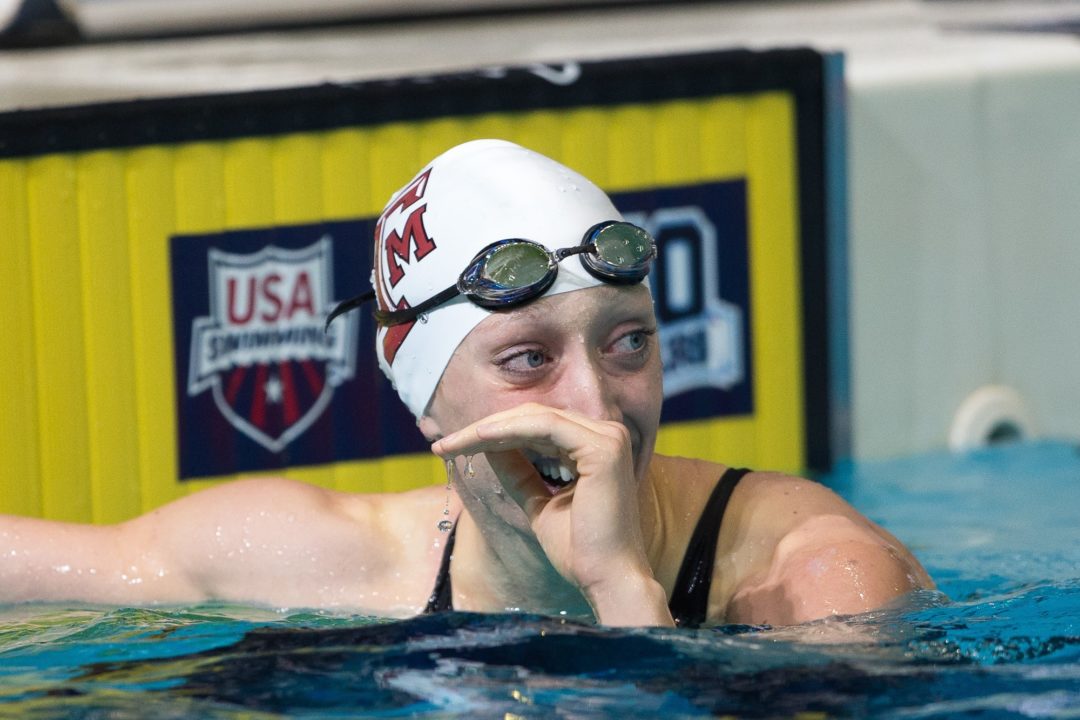 Breeja Larson will try to lead the Texas A&M Aggies to a Top-3 finish at next year's NCAA Championships for the first time in program history (Photo Credit: Tim Binning, the swim pictures)

Minimal Graduation Losses: The Aggies have been very deep in recent years, and this will prove to be a particularly vital asset for A&M in the upcoming year. Of the 199.5 individual points that the Aggies scored at the 2013 NCAA Championships, they are only losing 41 points from graduation, and this means that the team is returning a massive squad from last year’s NCAAs. In fact, the Aggies are returning 12 of their 16 NCAA qualifiers from last season, and this means that the ladies will have several experienced leaders to motivate a large freshmen class in the 2013-2014 season

Developing Talent: Coach Bultman is used to developing talent from raw swimmers, as he has only secured one top-ten recruiting class in any of the seven consecutive years that the Aggies claimed a top-10 finish at NCAAs, and this is a testament to  the potential that can be found in an the Aggies’ freshmen class this year  Northern Ireland standout Sycerika McMahon is an incredible talent already as she has posted impressive times in the shorter long course freestyle and breaststroke events. In the 100 meter breaststroke, McMahon has been a 1:08.80, but she was not able to swim the event at the 2013 FINA World Championships due to a procedural error.  She still competed in the 200 meter individual medley and the 100 meter freestyle events in Barcelona, where she posted personal bests of 2:14.38 (18th)  and 56.19 (34th) respectively. Coach Bultman will surely look to help McMahon translate her success in long course into short course triumphs, and only time will tell if he is successful in turning her into a name to watch out for at next year’s NCAAs.

Brazilian talent Franko Jonker is a big pickup for the Aggies this fall, and she will try to follow in the footsteps of Breeja Larson and sophomore standout Ashley McGregor in the breaststroke races. She has best times of  1:09.5/2:32.5 in the 100/200 long course breaststrokes with times of 1:01.5 and 2:17.2 in the short course variants of those races, and it will be interesting if she can continue to improve in yards in the next few years. The Aggies’ other foreign recruit, McMahon from Northern Island, has established herself as a very competitive middle distance freestyler, a she has posted best times of 2:00. To compensate for the loss of backstroke specialist Tess Simpson, Coach Bultman recruited heavily within Texas and found Julia Cook, Margaret Cooke, and Madeline Edwards, all who have the potential to contribute on a national scale in the long-run. Cayla Jetter is also a proficient backstroker, and has recorded respectable times in the long distance freestyle events. She will use the leadership of Sarah Henry to help settle into the spot vacated by the graduation of distance free specialist Maureen McLaine, who A-finaled at NCAAs in the 1650. Corinne Priest from Providence, Georgia will also provide some options for Coach Bultman in the sprint backstrokes. Alama Area Aquatic Association’s Sarah Gibson has been 1:49 in the 200 freestyle, and if she improves in her mid-to-long distance freestyle events, she will join Jetter in the long distance events while developing as an option for the 800 free relay.

The Aggies also add Colleen Konetzke, a sophomore transfer from Wisconsin, who is a middle-t0-long distance freestyle specialist and posted very respectable times as a freshman.  At last year’s Big 10 Championships, Konetzke posted times of a 1:49.19, 4:49.23, and 16:53.11 in the 200-500-1650 freestyle races. Her times in the 500 and the 1650 would have both scored points at last year’s SEC Championships, so given the proper training, we may see Konetzke become a key performer for the Aggies both individually and in relays.

Diving: With the graduation of Rebecca St. Germain, the Aggies will  need new divers to step up to the plate come next March. Luckily, 5 of the 6 divers for the team are sophomores or younger, and this means the Aggies will have plenty of time to develop these young ladies into potential scorers on a national scale in upcoming years. Jessica McAulay is the lone upperclassmen for the Aggies, and she did take 2nd place in the platform event at the 2013 SEC Championships (328.20 points) and she will try to simultaneously qualify for next year’s NCAA Championships, while mentoring three freshmen divers. Zoe Alaniz was the 4A state champion in Texas, Courtney Hattie placed 2nd place/3rd place in the platform/3 meter events at the 2013 Speedo Junior Elite Nationals Diving Championships, and Destine’e O’Neal is a young talent out of Texas, and the three will try to further the Aggies’ chances of scoring points in diving next year.

Other Returning Names: Besides the monster presence of Larson, Henry, and Adams, the Aggies have plenty of other returning talent that will prove to be key if the team wants to secure a top-3 finish next March. Junior Liliana Lopez Ibanez is rapidly developing into an elite sprint/middle distance freestyler with best times of 48.3 and 1:44.4 in the 100/200 freestyles. She scored 18.5 points individually and was on all fo the Aggies’ NCAA relays besides the 200 medley relay, proving that she will be HUGE again for the team next year.

Senior Caroline McElhany was a big part of the Aggies’ SEC Championship effort last year with 82 points of her own, but she peaked before the NCAA Championships. Her time of 1:53.24 in the 200 butterfly from SEC’s would have been 2nd at NCAAs had she duplicated the effort, and she also has a best of 1:55.97 in the 200 IM. She will try to carry her momentum into NCAAs next year.

Senior Erica Dittmer is a multiple-time NCAA qualifier, and she was 15th last year in the 200 individual medley (1:58.35), though her best is a 1:56.96. She also contributed to the 200 free relay, the 200 medley relay, and the 400 freestyle relay, so she will be an excellent relay option for the Aggies once again.

Senior Melanie McClure has been 1:54 in the 200 backstroke, and though she did not earn a second swim at last year’s NCAAs, she was just .17 seconds away from making the consolation final, so she will look to score points in March.

Junior Kelli Benjamin was another strong relay performer for the Aggies at the 2013 NCAAs in the freestyle variants, and she also has personal bests of 49.3 and 1:46.2 in the 100/200 distances. She is poised to make the jump into the scoring heats at NCAAs next year if she can make some adjustments.

Junior Sammie Bosma led off the 400 free relay for the Aggies at NCAAs with a 49.24 effort, though her lifetime best is a 48.90. She will continue to contribute both in relay action and in individual events, as she scored 40 points individually at last year’s SEC Championships.

Overall Outlook: The Aggies are going to be VERY competitive in the 2013-14 season, and we may see them vie for a top 3 or top 2 finish at the NCAA Championships. Blessed by a strong returning group and plenty of young talent, the Aggies have all the key pieces needed to form one of the best swimming and diving contingents once again. Steve Bultman will look to extend his team’s impressive string of performances over the last 7 years, and we may see some national standards tumble along the way. Breeja Larson will surely try to tackle her American Records in both the breaststroke events, and Cammile Adams will try to defend her crown in a 200 butterfly field that only graduated one swimmer from last year’s A-final. Sarah Henry will also try to take her first career individual title in the 1650 free after USC’s Haley Anderson’s graduation.

Thanks for the addition, I must have missed her when checking the roster. Also, as for the URL, I have no idea why that didn’t change from when I did my first draft before doing more research… You caught me!

Also, just from a marketing & PR standpoint, you MIGHT want to edit your URL for the story so that it doesn’t include the words “Weak-Recruiting-Class”. Especially in a story that points out Coach Bultman has repeatedly produced top 10 teams WITHOUT classes judged to be top 10 out of high school by “experts”.