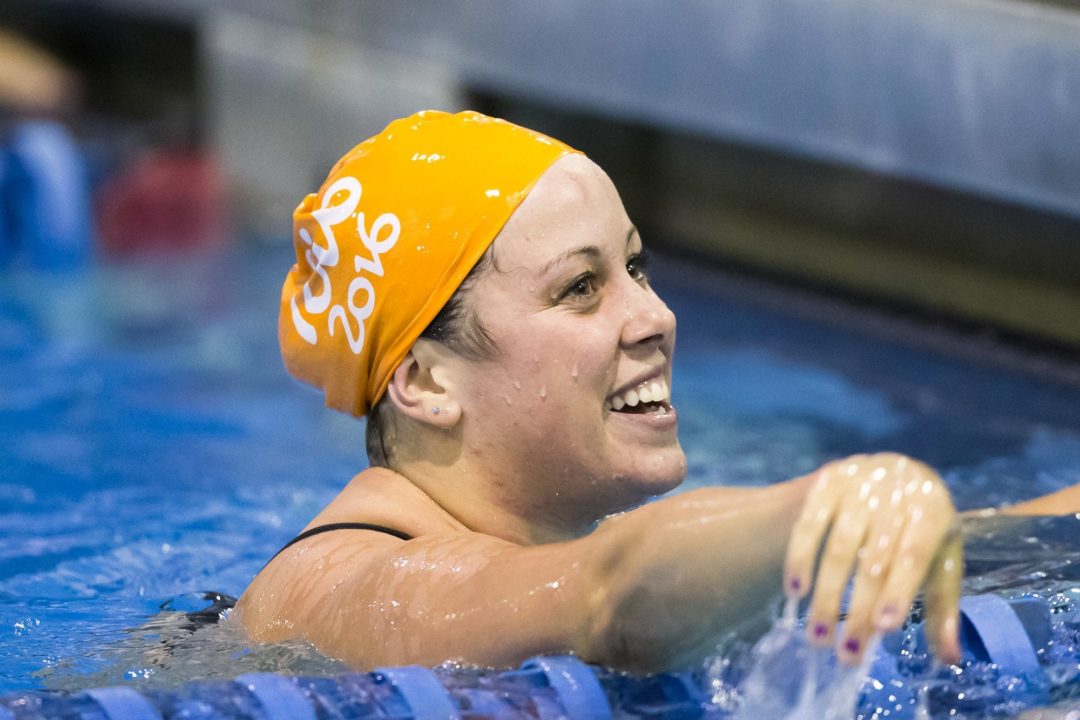 Of all the exciting things that came from Tennessee in the 2012-2013 season, Molly Hannis may have been the most exciting. Archive photo via Tim Binning/TheSwimPictures.com

2013-2014 Lookback: This year for Tennessee…it was, in the least, the best year in program history. Coming into the 2013 NCAA Championships, they had never won an NCAA title in a relay, and then they won the first three of the meet. If someone had said that they’d win an NCAA relay, that prediction wouldn’t have met much resistance, but I don’t think there were many who predicted them to be that explosive last year.

It wasn’t, however, just NCAA’s where they were impressive. The forward momentum started in January where the Vols knocked off the eventual national champions Georgia in a dual meet. One read of the comments section in that meet’s recap makes it clear that there’s still a large portion of our sport that doesn’t believe in going fast in-season (and, in fact, think it’s a bad thing), but then the SEC Championships rolled around, and the Volunteers got even better.

Finally, things came to a head at NCAA’s, where they tipped SEC rivals Texas A&M by two points for the top three, and perhaps, for a season, wrested the title of ‘best conference in the country’ away from the PAC 12 by putting four teams in the top six at the meet.

Few Graduations: Yes, the Volunteers lost some pieces to graduation. Three really big ones, in fact. But it isn’t the kind of mass graduations that we sometimes see when a team loaded with seniors has one breakout season. That’s why this Tennessee team might have some staying power in the top 5.

They lose Kelsey Floyd, who had a huge career for Tennessee but some serious health problems as a senior kept her from really ending on a personal high-note in her individual events; they lost Caroline Simmons, who became way more significant to this team than any of us on the outside, at least, expected in her two years after transferring from Buffalo; and they lost their senior diver Jodie McGroarty.

Add to that Brooke Watson, a significant SEC contributor, and there were only 4 graduations on this team, period.

The Sophomore Class: The team, out of 22 swimmers on the roster last year, had 10 freshmen, which shows that this is a program that’s definitely building some momentum, not losing it.

Those freshmen were huge contributors last year, including SEC 50 free co-champion Faith Johnson. Over the summer, Johnson swam the second-fastest 50 free in American 17-18 history while doing some training with David Marsh and SwimMAC Carolina.

She was already 3rd in the NCAA in the 50 last year, but with her sprint-mate Simmons gone, she needs to be even better as a sophomore. That probably includes stretching her 48.65 for 18th in the 100 free into something worth at least a B-Final, but more hopefully the A final.

Altogether, Tennessee had 26 individual swims from freshmen at last year’s NCAA Championships – a good representation of just how young this team really was. Harper Bruens was 24th in the 50 free with a 22.49 (her best time), was a 22.1 on a prelims 200 free relay (she didn’t end up swimming the final), and a 49.6 in the 100 free (season best of 49.00 at SEC’s). She will be one of the keys to Tennessee making-or-breaking their season next year, and whether she can take up Caroline Simmons’ old role.

Mary Griffith is a very good middle distance swimmer. Her 1:46.12 in prelims of the 200 yard free left her in 20th place – about three-tenths of a second away from scoring.

Amanda Carner qualified for NCAA’s as a freshman as well, and though she was quite a few places shy of scoring, she still swam very well at the meet; that includes a 33rd-place finish (1:55.57) in the 200 back. With the way the 200 back has developed over the course of the year, though, that really doesn’t leave her all that far from scoring as a sophomore – a little over a second.

The Breakout Breaststroker: Among all of the really exciting things that happened for Tennessee last year, maybe the most exciting was the emergence of breaststroker Molly Hannis as a sophomore (she’s now a junior). Hannis went toe-to-toe with Texas A&M’s Breeja Larson, the best breaststroker in the country, at the SEC Championships, and earned a lot of respect at that meet for her pure speed and guts.

She wasn’t quite as good in the 100 at NCAA’s as she was at SEC’s, but now going into her junior year, she’ll enter the season as one of the country’s big breaststroke stars.

Backstroke Group Improves: Last year, after the graduation of Jenny Connolly, Tennessee needed a backstroker to step up, and they got that in spades.

Lauren Solernou, now a senior, became the second-fastest 100 backstroker in school history, though her 200 wasn’t quite as good as she’d been the year prior.

The sprinting, though, is what they needed last year to win those two medley relay NCAA Championships and place 3rd as a team overall. She didn’t score individually, but was big on those relays.

Joining her as an NCAA qualifier in the backstrokes was freshman Maddie Hahn. She was roughly the same time at the SEC Championships, the Georgia last-chance meet, and NCAA’s in the 100 back (53.4’s at all), but her 200 back fluctuated more than that. She was as fast as a 1:54.1 at the last chance meet, but wound up at a 1:56.3 at NCAA’s.

Still, she dropped a total of three full seconds from her high school best as a freshman. This year, her challenge will be to qualify for NCAA’s at the SEC Championships so that she won’t have to use her best swims on a last chance meet. If she can do that, she can be an NCAA scorer as a sophomore.

Replacing Floyd: The Volunteers will hope to have the same success replacing Kelsey Floyd this year as they did replacing Connolly last year. That challenge will, in part, come from returning swimmers. Mary Griffith was a 53.1 in the 100 yard fly last year as a freshman, and 11th-best in the SEC (the 2nd-fastest freshman). She will have to keep working, however, if she wants to place in an conference A-Final, as not many SEC butterfliers graduated.

She’ll have even further to go to replace Floyd’s points in the 200 fly, or those of another graduater – the surprising Brooke Watson.

Luckily, the Volunteers went heavy in recruiting last year, especially with an eye toward replacing those butterfly points.

In fact, Tennessee has brought in 3 A-flight butterfly recruits, which is part of why we ranked them as the #2 class in the country.

That includes Michelle Cefal, a Junior National Teamer, who has already been 53.1 and 1:55.5 in the 100 and 200 yard flys. That’s as fast as the returning Volunteers have been.

Also in the class is Heather Lundstrom from Missouri, who has been very good very early in her career already; and Trisha Forrester, who’s father is a 1976 Olympic medalist, also join the team this year.

Other Freshmen: Tennessee also brought in Christine Leander, who has bests of 53.6/1:58.1 in the 100 and 200 yard backstrokes. Given what the Tennessee backstrokers did last year, and given where Leander is starting, she could conceivably fight Solernou for spots on the medley relays.

This class really had everything in it, save for a big sprint freestyler, and that’s the kind of versatility in recruiting that will continue to keep the Volunteers in the top 5 teams in the country.

Transfers: It seems like just about every possible transfer in the country at least checked out Tennessee as an option. They ended up landing two big ones: Lauren Driscoll from Cal and diver Sarah Chewning from Kentucky.

She’s another big addition in an area where Tennessee was weakest (though that’s in relative terms) last season.

Diving: The other addition, Chewning, will be important for the Volunteers after All-American Jodie McGroarty graduated following a great season. Chewning is a Zones finalist who is on the verge of making the move into the NCAA Championships

They will, however, bring back Tori Lamp, who was an All-American last year and the two-time defending SEC Diver of the Year. She scored 42 points at last year’s NCAA Championship meet, including a runner-up finish on platform (behind only an all-time great, Championship Record breaking result from USC’s Haley Ishimatsu).

They’ve added two good diving recruits, Gaffney Taylor and Bailey Wind, and in the capable hands of Dave Parrington, the sky is the limit for their development.

2013-2014 Outlook: This Tennessee team graduated some big points, but they’re still a very, very good team. With the middle-distance additions they’ve made, their 800 free relay has the potential to move into the top five in the country, though their 200 and 400 free relays will really have to fight to stay in the top 5.

The Volunteers, on paper, are absolutely a top 5 team. They’re probably a top 4 team. They’re 50/50 on a top 3 team, and if they hit their tapers and the freshman really develop, they’re certainly not out of the conversation for the NCAA title.