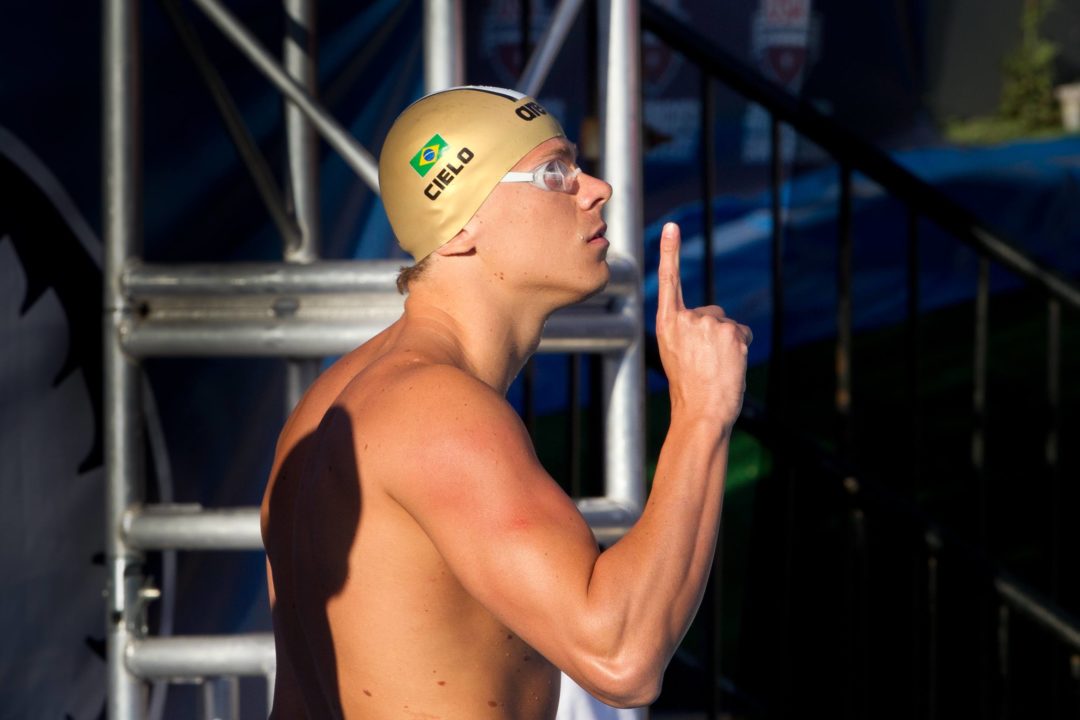 Cielo and the sprinters will be in the primary focus at Brazil's biggest Olympic Trials meet. (Photo Courtesy: ©Tim Binning/TheSwimPictures.com)

Next Tuesday, April 24th, Brazil will kick off the 2012 edition of their Maria Lenk Trophy. This year’s meet will not only count as the biggest leg of their Olympic Trials qualifying, but this is also the world’s most exciting and intense team meet this side of the NCAA Championships. Swimmers cart in from all around the globe, with each team allowed to bring in (often hired) two international swimmers to supplement their rosters.

As has become the norm for these major Brazilian meets, most of which are swum outdoors, the weather in Rio next week is expected to be poor. It won’t be as cold as last year (though still not exactly warm), but rain is in the forecast for the entire meet.

First, for Olympic Qualifying. The top two swimmers, under the FINA Automatic qualifying time, in each event will go. Those times can be pulled from either this meet of 2011’s World Championship Trials.

If there are still open spots remaining, they will be filled in Rio in early May at a special Olympic qualifying meet. That meet will also be used to finalize relays.

That means swimmers like Cesar Cielo are pretty-well cemented onto the team. Bruno Fratus is probably fairly comfortable in the 50 as well.

But the 100 freestyle will be the race of the weekend, as it usually is in sprint-hungry Brazil, and perhaps nobody will be more in-focus than Auburn’s Marcelo Chierighini. The Brazilians have an outstanding three swimmers for their 400 free relay between Cielo, Fratus, and Nicolas Oliveira.

Cielo was hoping for a textile-best at this meet last year. He didn’t get there, but in the past few months his home training pool has been granted an upgraded timing system and some Omega track-start blocks, with his start being the part of his race that he’s been shakiest on. I still don’t think he’ll get the textile-best, but a 21.7 or 21.6 is within his range.

But the 4th leg has been shaky (and to some extent the 5th – which is why they missed the finals at World’s last year without Cielo on the prelims group). Chierighini is young (and even younger in “swimming years” as he’s still a bit new to the sport) and has huge potential, so there is a lot of hope resting on his shoulders for the relay that’s oh-so-close to greatness.

But he’s not just interested in filling out a relay spot.

“I have been preparing him to fight for an individual spot, meaning he will try and swim faster than 48.7 which is the second fastest time in brazil right now,” said his American coach Brett Hawke. If an individual swim isn’t in the cards, then the target becomes a 49.2, which currently puts him on the relay (though both of those numbers could shift this weekend).

Speaking of Chierighini’s times in the NCAA Championship meet, which weren’t as fast as many had expected,  Hawke said that the Brazilian was “unshaved with (one) week’s rest,” saying that Chierighini still has a lot more speed in him this season. The Olympic year took precedent in their minds.

In case you haven’t been following the latest Brazilian news, Thiago Pereira (once trained at USC with Dave Salo) is now back home in Brazil working with Cielo, Alberto Silva, and the rest of the PRO 16 group. Much to the same extent that Cielo has been working on the back half of his 100 free, Pereira has been working on the closing freestyle leg of his IM’s.

From early returns, it seems to be working successfully, which should silence at least some of the jokes about how bad his freestyle has been (despite being a pretty good freestyler, when on it’s own). There are still big concerns in Brazil about Pereira’s ability to step up in big meets. Expect him to be more rested for this meet than many who have their spots similarly sealed up.

Brazilian backstroker, and the biggest name in Brazilian women’s swimming at the moment, Fabiola Molina will be making her return at this meet after a 6-month doping ban. This will be her first competition back after that suspension that cost her a spot in last year’s World Championships.

She’s got a whole lot of work to do in her specialty, the 100 back, as she doesn’t have a time, period, that would get her to the Olympics from one of Brazil’s annointed qualifying meets.

The Brazilian men’s breaststrokers haven’t quite lived up to lofty expectations in the last year, but they’ve still been very, very good. Felipe de Silva sits with a qualifying time of a 1:00.01 from Worlds, and is probably safe (though, he could sneak under the minute barrier in this meet). The current target to make the team sits at top two and a 1:00.4 or better; Joao Gomes and Felipe Lima are the leaders for that spot (I personally like Lima’s chances), but Henrique Barbosa, the 200 favorite, is in the battle as well.

There is a very good international lined up for this year’s meet. Each team gets two international swimmers to bring to the meet and count towards their scoring, and this often brings out huge names (for some decent pay for a week’s work).

The field is not quite as good as last year’s, where the training group from USC sent a big group along with Pereira, but there is a lot of very interesting names. For starters. French swimmers Fred Bousquet and Laure Manaudou will join their Auburn teammate Marcelo Chierighini in swimming for Pinheiros. This makes a couple of interesting dynamics. First, Bousquet joins a team that includes Bruno Fratus and Chierighini already. That makes them the favorites in the sprint-free relays over Cesar Cielo’s Flamengo club.

But bigger than that, those two coming to Rio is a huge victory for Brazil as a hold. Bousquet will give Cielo a great competition in the sprint freestyles that he will surely get jacked-up for, and Manaudou will give Fabiola Molina the competition in the backstroke that she rarely gets in these meets (without being so dominant as to blow her away).

There are two Americans in the race: Charlie Houchin, who will be racing for Fiat Minas, and Eugene Godsoe, who is swimming for Flamengo. I think that Flamengo probably did themselves the most good with their additions. They first brought in Mireia Belmonte, who is extremely valuable in this meet. She can swim a huge array of events, and a lot in the same day at that, and against a weak women’s field should be able to pull off at least 8 or 9 wins in the 6-day meet (if not more than that). Similarly, Godsoe on the men’s side swims a lot of different events (pretty much everything but breaststroke), and he could bring in a lot of big points too.

Houchin brings his own value as a distance swimmer, which is the weakest part of the men’s meet.

The other interesting name is Kuwait’s best swimmer Yousef Alaskari. He goes to high school in the United States and swims with the Davie Nadadores, who have a huge Brazilian training group that includes Minas’ Felipe Lima. He will be headed to swim at Georgia next year, so he won’t be receiving any pay for the meet, but this is great international experience for him, and should be good preparation for the pressure of the team-focused NCAA Championship meet. He’s swimming for the Gremio (GNU on your psych sheets) club that is not in the elite tier, but is still a very good program.

Don’t underestimate the importance of this team race. Most of the major clubs are linked directly to Brazil’s major soccer clubs, and I don’t think I need to preach the significance of soccer in that country. Pinheiros has historically been the dominant team in this meet, but they’ve lost their stranglehold recently. Flamengo became the favorite at last year’s meet, but it was Minas, with superior depth and a good women’s team, that took the title in runaway fashion.

After winning by 800 points last year, Minas has to be the favorite again in 2012. Pinheiros and Flamengo should have a tight battle for 2nd, but I’ll take Flamengo to finally make the jump and overtake Pinheiros. Both have good international swimmers, but I think Flamengo’s are just a hair better, which should give them the edge.

The question for Felipe Silva is can he get down under 1:00 without massive dolphin kicks into the walls? They finally caught him at the last Brazilian championships, so will he change his technique?

Silva has also lost a lot of weight, finally started watching what he eats. I think he’ll break a minute in London…could get it next week if conditions hold up.

If Cielo only swims 21.6 he has a big chance to lose the race to Fratus.But weather will play a big part, and right now is not good.
In Team champs, i think the SA records will make a difference in final score.

Don’t underestimate nico Oliveras- he is going to surprise folks- a peaceful warrior!