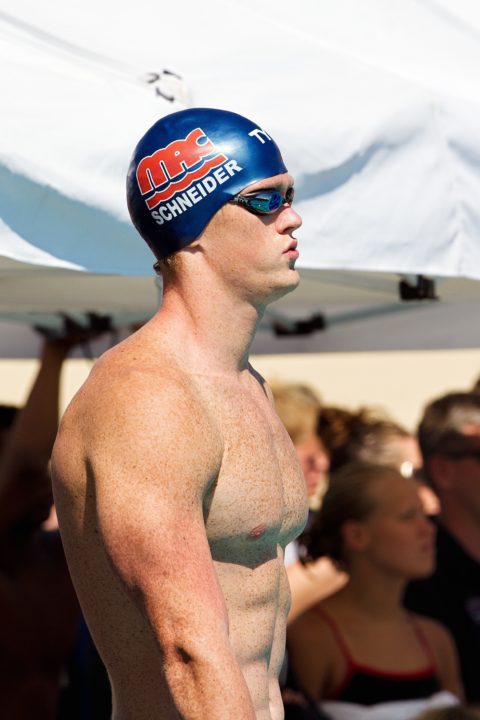 Josh Schneider took on an NFL receiver in the 40 yard dash. You won't believe who won. (Photo Courtesy: ©Tim Binning/TheSwimPictures.com)

Swimmers are water-dwelling creatures. Inside the aquatics, they are graceful, they are powerful, and they achieve coordination that is mind-boggling when dissected.

But that doesn’t mean that professional swimmers aren’t every bit as good, if not better, athletes than football players.

Check out the video below where SwimMAC’s Josh Schneider races a sprint against NFL wide receiver Ruvell Martin of the Buffalo Bills (it’s labeled as 40 yards, but looks shorter than that). For those unfamiliar, wide receivers are generally the fastest players in the sport. Martin isn’t the fastest of them, but he’s still very fast. Way faster than anybody you know. Unless you know Josh Schneider.

Below, they race in a test of speed and acceleration. Guess who won…(hint: it wasn’t the guy paid a lot of money to be fast on land).

Schneider is the one closest to the camera.

Josh was a football player in HS, no? Though I remembered hearing he played linebacker.

Not to diminish Josh’s victory there, but the best time I found for Martin’s 40 was a 4.61 from when he was a college senior eight years ago. It’s not slow by any means, but it’s on the slow side for a WR.

Wish whoever shot that knew to turn their phone when shooting video. Just something that grinds my gears. Oh, and it was prolly a 40 yard dash, not meter.

anyone know where you can watch this? or did they really make him take it down?