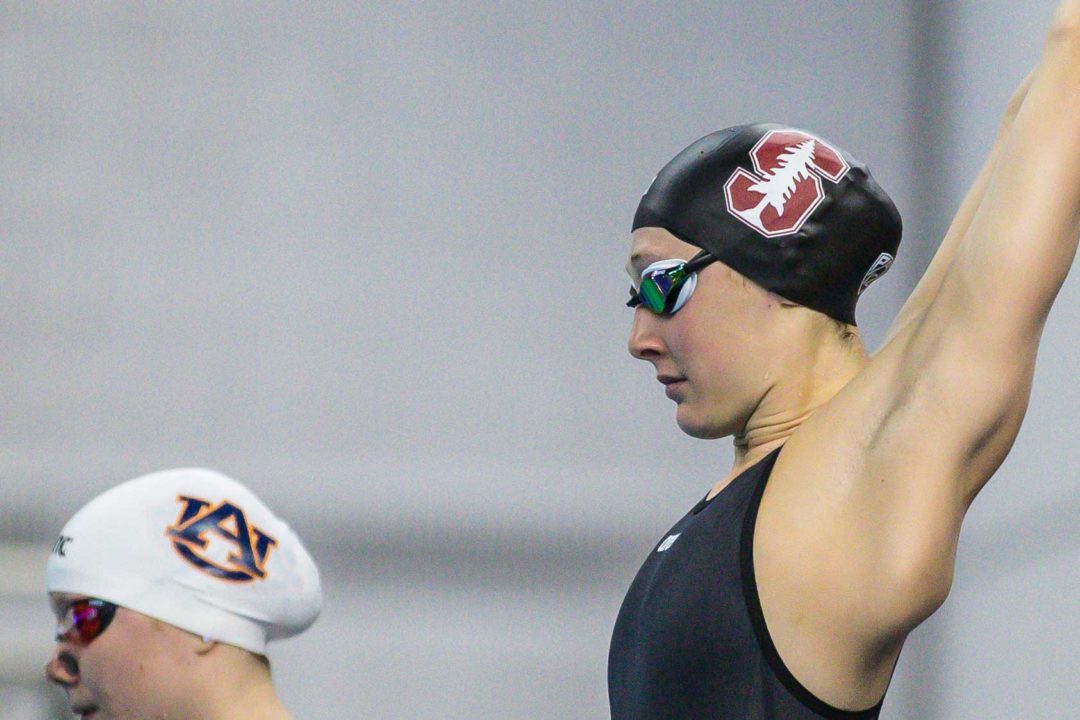 4-time Canadian Olympic medalist Taylor Ruck has confirmed to SwimSwam that she will be returning to Stanford this fall. Stock photo via Jack Spitser/Spitser Photography

4-time Canadian Olympic medalist Taylor Ruck has confirmed to SwimSwam that she will be returning to Stanford this fall. Ruck competed her freshman season at Stanford during the 2018-2019 season, where she played a pivotal role in the Cardinal winning the NCAA title. She then took an Olympic redshirt for the 2019-2020 season, and spent the year training for the Olympics in Toronto. The Coronavirus global pandemic caused the 2020 Olympics to be postponed to 2021, and Ruck subsequently took an additional redshirt year for the 2020-2021 season. The 2021-2022 season will be Ruck’s redshirt sophomore season.

Ruck is also the Stanford team record holder in the women’s 200 back, and is the #3 performer in NCAA history with her personal best of 1:47.59. Ruck also ties with Stanford teammate Simone Manuel for #4 all-time in the NCAA rankings (1:40.37).

In addition to her almost certain A finals appearances in whichever 3 individual events she chooses to race at NCAAs, Ruck will be a gigantic boost to Stanford’s relays over last year. She has a flat-start personal best of 46.76 in the 100 free, but she also famously anchored the Stanford 400 free relay in 45.99 at the 2019 NCAAs.

After finishing 9th at last year’s NCAAs, Stanford now looks poised to bounce back in a big way this season. Ruck will be returning alongside Brooke Forde, who has elected to take advantage of her 5th year eligibility granted by the NCAA due to the COVID-19 pandemic. Stanford also has World Record holder Regan Smith and American Record holder Torri Huske coming to Palo Alto as freshmen this fall. Ruck, Forde, Smith, and Huske are all Tokyo 2020 Olympic medalists.

Smith and Ruck will make one of the most formidable duos we’ve ever seen in the NCAA. Both swimmers are likely to compete in the 100 and 200 back at NCAAs, and both are title threats. While Ruck is the #3 performer NCAA performer all-time in the 200 back, Smith is actually faster. Smith will enter the NCAA with a personal best of 1:47.16 in the 200 back, which is under the NCAA Record of 1:47.24.

Outside of the NCAA, Ruck has represented Canada at both the 2016 and 2020 Olympics. In 2016, she helped Canada to Bronze medals in the women’s 400 free relay and 800 free relay. Last month, Ruck swam on the Canadian 400 free and 400 medley relays, both of which won Silver.

Reganh Smith’s 200 back *just* happens to be the American record as well, BTW. Might be good to mention that too.

50 posts in and no mention of Meehan? He was the favorite punching bag just 2 weeks ago. Did I miss something in my post Olympics slumber?

She’s gonna get back and swim faster than ever. Good luck, Taylor!

Toronto hard place to live if you are not used to 6 months of winter. Ontario’s lockdown was to worst in the world which would have just made it worse

Guess you missed her less than stellar performances at Canadian Trials and in Tokyo. Saying she’s sure to A final in whatever three events she chooses is a stretch right now. She isn’t the swimmer she was in 2019.

Maybe. But she did final at the Olympics in the 2back despite her health challenges this year. All the best to her for general health first and then after that potentially a return to 2018/19 form.

“almost certain A finals appearances”.. With Ruck’s current form A finals are not certain

Her form is excellent for the short course version. No worries. She will be training with Smith and they will push each other. Everyone needs to work on their underwater and using the walls more. It is especially helpful with short course.

She just made an Olympic final.

Yes, The NCAA will be exciting, with lots of swimmers who did Not make the Olympics shinning and making big impressions.
This is a three year count down till the next Olympics, so everyone will be training harder than usual the year after the Olympics. Let’s just hope that we get Covid totally under control and let the fans back in the stands to amp up the energy!

Great news! Welcome back Taylor! Along with Forde, Ruck, Smith and Huske. Stanford will have Nordmann sisters, Tang , Pearson and Tadder as well. Depth will be the key. Stanford needs sprinters, long distance and Breaststroke crews to step up..

It will be settled in the pool. Not in the fan zone. Dual is probably a fantasy right now, An invitational multiday a better format, but it is on for NCAAs, Atlanta in March. Probably epic

NC state Invitational in November will have some great teams and be a good early season test.