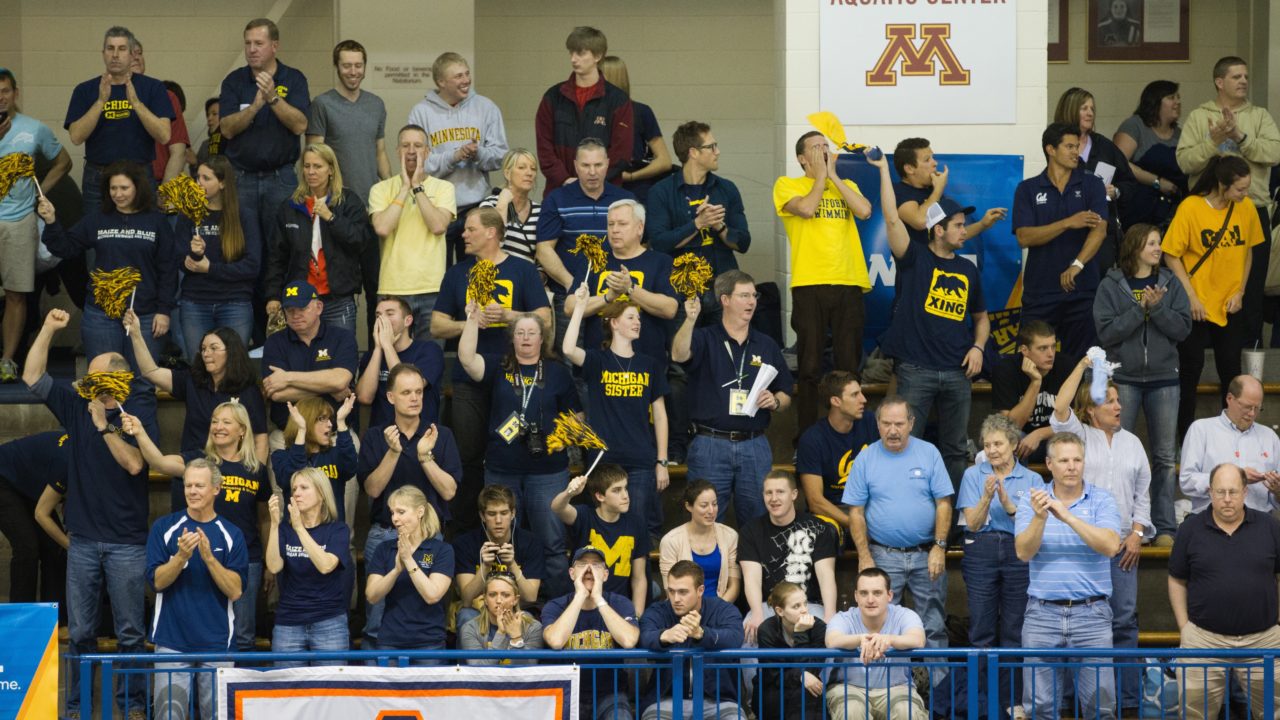 In anticipation of a cool meet in Ann Arbor, let's take a fun look into the annals of swimming history. (Photo Courtesy: ©Tim Binning/TheSwimPictures.com)

Michigan SID Brad Rudner has been doing some serious legwork for Michigan’s 20-yard dual meet today against Eastern Michigan in Ann Arbor. (Read all about that meet by clicking this link). He’s tracked down a copy of the 1967 AAU Handbook that includes the last-known official 20-yard course records to see what times EMU and Michigan are gunning for in today’s oddly-distanced dual.

This book is like a blast-from-the-past. Among the names that still hold 20-yard records are former Yale’er and Swimming Hall-of-Famer Don Schollander, who won 4 gold medals at the Tokyo Olympics in 1964. He holds both the 200 and the 220 yard freestyle marks. As evidence of how badly the records will be destroyed in today’s meet, in the 200 yard free, even with an extra turn, he only went a 1:44.1 in 1967. That wouldn’t even get him a second look from most a Michigan coach in the modern-day if done in a 25-yard pool.

Other cool names include former Texas A&M swimmer Richard Nesbit, a long-time coach in Texas who recently passed away, with a 1:00.8 in the 100 breaststroke at the old Texas A&M pool; and on the women’s side Pam Kruse, one of the most famous alumni from Western Michigan University and a 1968 Olympic medalist, who dominates the women’s freestyle record-books.

Some of the nomenclature is historically-humorous as well. The specification of breaststroke records as “surface stroke” and the naming of the “butterflystroke” is a reminder that the two were only recently recognized as independent events during this era.

It’s also kind of cool how many of the names in this record book line-up with those of top swimmers with those in the modern era (though we don’t know of any relationship). There’s a Shields, a D. Roth, a P. Murphy, a Ferguson. Just a reminder of how closely connected we are to our own history.

At present, there’s a lot of Big Ten schools on those lists, but not a single Michigan program-held record (despite them being one of the dominant teams in the era). That should be totally rewritten by the end of the day on Friday.

Live results for the potentially-historic meet will be available here.

I’m surprised that no one has mentioned the 220 Breaststroke Record Holder – Dennis Pursley!

First only swam in 20 yd freshman year which was my first ever and that was slow and never even close to those times printed in book, Swimming changed drastically from late 50’s into the 60’s everyone began to train with real yardage and technique, Should be a fun meet. In 20 ft wide 4lane20yd pools they sometimes in dual meet swam 2 heats 2 to a heat so arms wouldn’t clash.

Bellflower in La County was 331/3 yards and had a novice meet where you went for high point throphies. What they did was cut off the extra yardage and make it into a warmup pool when I e-mailed about the pool.

Well, I swam in novice meets at 20 yards in 1969 and 1970. And some novice meets allowed you to do the breaststroke kick in your butterfly.

“Long Course” 100 yards? I thought University of Iowa had the only 50 yard pool every constructed?

The “old” Kenyon pool could also be set up as 50 yards….also remember swimming in an old MDC pool in Cambridge MA that was 55 yards long…..just for old times sake they should have a few races with “flag finishes”……

EMU have a couple of studs dont be surprise if they take a few records.