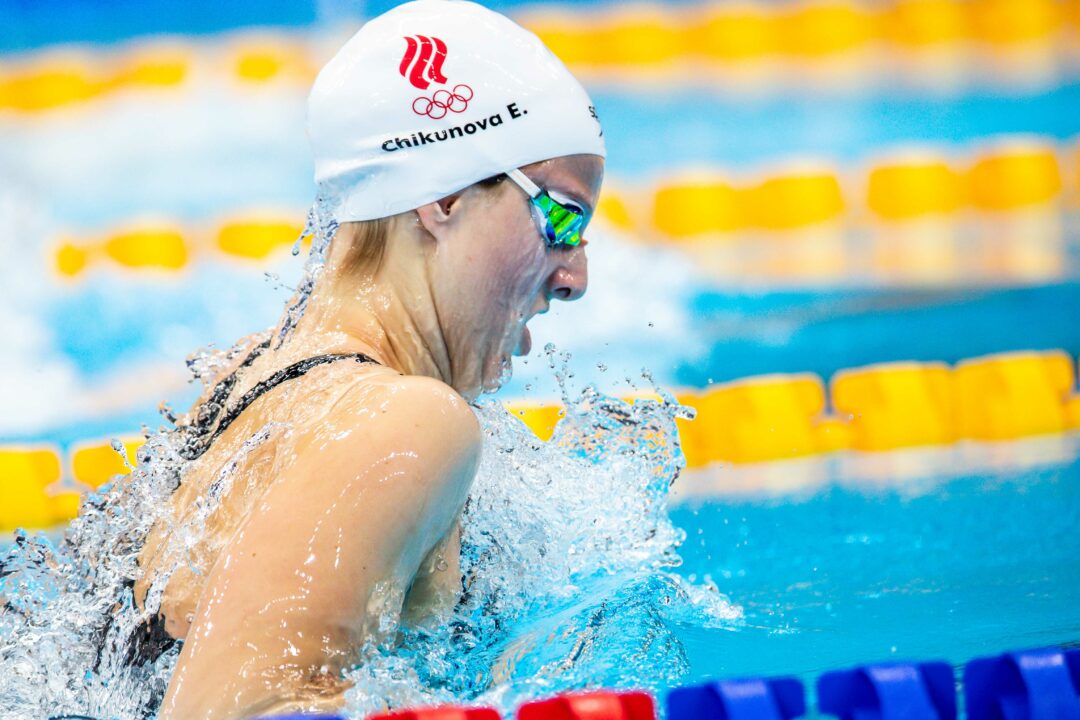 On the 6th and final day of the 2022 Russian Swimming Championships, another European Record fell at the hands of Evgenia Chikunova in the women’s 200 meter breaststroke. Hers was the third European Record to fall during competition in Kazan this week, and she was joined by another National Record from Maria Kameneva.

The Solidarity Games are a season-ender for athletes from Russia and Belarus, who are ineligible to compete in December’s Short Course World Championships because of a ban on international competition after Russia’s February invasion of Ukraine.

In the women’s 200 breaststroke, the 18-year old Chikunova swam 2:14.70, which is within .13 seconds of the World Record and breaks the European and Russian Records.  That time breaks the old record of 2:15.21 that was sent by Denmark’s Rikke Moller Pedersen in 2013. It also broke the 2018 Russian Record of 2:15.62 set by Yulia Efimova. Pedersen’s record was set in a race where Efimova initially won and set a European and World Record, both of which were eventually stripped by a positive doping test. Efimova never went as fast again.

Chikunova’s previous best time was a 2:16.88 done at the 2021 European Short Course Championships which was the European Junior and World Junior Record. There, she swam 2:16.88. As would be expected with such a big drop, her new record-setting swim includes improvements in every leg of the race.

The swim makes Chikunova the #2 performer and performance in history, behind only American Rebecca Soni, who is currently the World Record holder.

FINA has previously said that in spite of the ban on international competition for Russians, any World Records that they set would be recognized if all FINA rules are followed. That includes following all required doping controls. LEN has not specifically said the same, but a similar approach is expected.

Chikunova wasn’t the only record breaker on the final day of competition. Maria Kameneva continued her breakout short course meet with a win and new Russian Record in the women’s 50 free.

She swam 23.35, breaking her own record of 23.48 swum at last December’s World Championship meet. That is her third Russian Record of the meet, one of seven total set this week:

Surkova, a double-record breaker at this meet herself, was 2nd in the 50 free in 23.92, which just missed her personal best by .02 seconds. That was Surkova’s second swim of the day: she also broke the National Record in the 100 fly early in the session, swimming 56.30. That broke her own record of 56.36 that was set during the 2020 ISL season.

Other Day 6 Winners and Notables

At this meet, cash prizes are being awarded for the top 20 men and top 20 women by their best FINA Points swim. Chikunova’s European Record on the final day of competition earns her the top women’s honor,  while Kolesnikov’s World Record in the 50 back earned him the top men’s honor

A great number of posters at this forum don’t really care of what’s going on in Ukraine. Too far from us. Moreover because of those stubborn Ukrainians who don’t want make some “peace negotiations” giving up 20% of their territory we are experiencing some inconveniences. You are beginning to forget the purpose of these bans and sanctions: stopping the aggression; punishing it for the crime.
If you watch this Russian championships you will notice that the main theme is “We are great”, “If they are afraid competing with us then that is their business. We don’t need them”.
That is how propaganda is working in Russia now. And you have to understand that that there is no such… Read more »

Hi Yozhik. I firmly condemn Russian invasion of Ukraine and I firmly support the incredible courage of Ukrainian people. But Russia is a severe autocracy: whoever disagrees on leader maximus’ decisions, above all on such a serious argument like “the special operation in Ukraine”, is harshly sanctioned or even imprisoned, so it’s difficult for me, who live in a democracy, being sure that I would behave in a different way from the vast majority of Russian citizens. Russian (and Belarusian) swimmers are already sanctioned with their ban from all the most important Fina and Len events: requiring that all of them become civil heroes that accept to be imprisoned is perhaps too much.

nuotofan, frankly regular russians are the people who let this severe autocracy to happen. And they are perfectly fine with it unless they have to go and die at war. That’s why it’s their responsibility. Did you follow what happened in Ukraine in 2014? More than hundred people were shot in the center of Kyiv fighting for the right to live in democracy. And we won. What 140 millions of russians did to fight the regime? Nothing. They don’t mind it.

Dear Nuotofan it wasn’t my intention to start the political discussion at this sport website. Just couldn’t keep silent. And that is why:
Our close friend that we know from elementary school and that we spent together our childhood and youth is living near Moscow Russia now. There was a long interruption in our communication since the beginning of this war. And finally we got a call on my birthday. But the conversation was very short. Our friend firmly believes that that were American rockets that ruined the city of our Youth and Dreams. And that was done purposely to blame it on Russia and to provoke the justified response by Russian Army in limited military operation.
When… Read more »

Is there a video?

Seems like there’s a solid shot this WR goes down before the year is over.

I am so glad you guys discuss terrorist state’s swimming while we are sitting here in Kyiv without electricity and heating in winter caused by Russian missile attacks on critical infrastracture.

You are not in Kiev dumbass

No way you’re from Ukraine and your name is Eugene.

Liar., LOL! Haven’t you heard that names of Greek origin have slightly different spelling in different languages? In my passport I’m Yevhen which is the Ukrainian equivalent of Eugene in English.

Because sports is sports and politics is politics my guy.

carlo, even most of the people in my country used to think so too. But that changes quickly after missiles start to destroy your country, city, places you love, people you know etc. I’m tired of explaining this, you’d better read Yozhik’s comment.

Yeah how dare we discuss an incredible performance by an 18 year old girl. She is complicit and bares personal responsibility for the hardship of those in Ukraine. It is disgusting that she is not doing anything to help them in her country where those who dissent are disappeared.

IM FAN, your ignorant views would change in a moment if you personally face something similar to what’s happening to us now, believe me. I don’t even blame you for not knowing what you are talking about.

Soni seemed so far ahead of her time.

Rebecca Soni was amazing, but to be fair, at the 2009 Duel in the Pool, they were all wearing magic swimsuits…so getting so close to the record is a big achievement.

Agreed. Records were meant to be broken.

She would definitely have to be considered a top contender if Russians are allowed to compete in Paris, if not the top contender for Paris given her consistency with going 2:20s in LCM and her continuing to improve both there and in short course as well (and just only turning 18). I think she’ll be under 2:20 come LCM season.

This WR is a goner in Melbourne next month. Kate Douglass will break it.

King’s SCY time was two years before her SCM time, and she began concentrating on the 200 much more between Rio and Tokyo. I would assume King’s best SCY time is probably faster than that. Not a great comparison.

The Russians also have another meet in three weeks, Salnikov Cup, so it could go down there as well.

i don’t think Douglass can beat king in melbourne but he can make it in 2:16
what mark do you think it would reach?

This seems very premature. People were also convinced she was going to break it in Budapest.