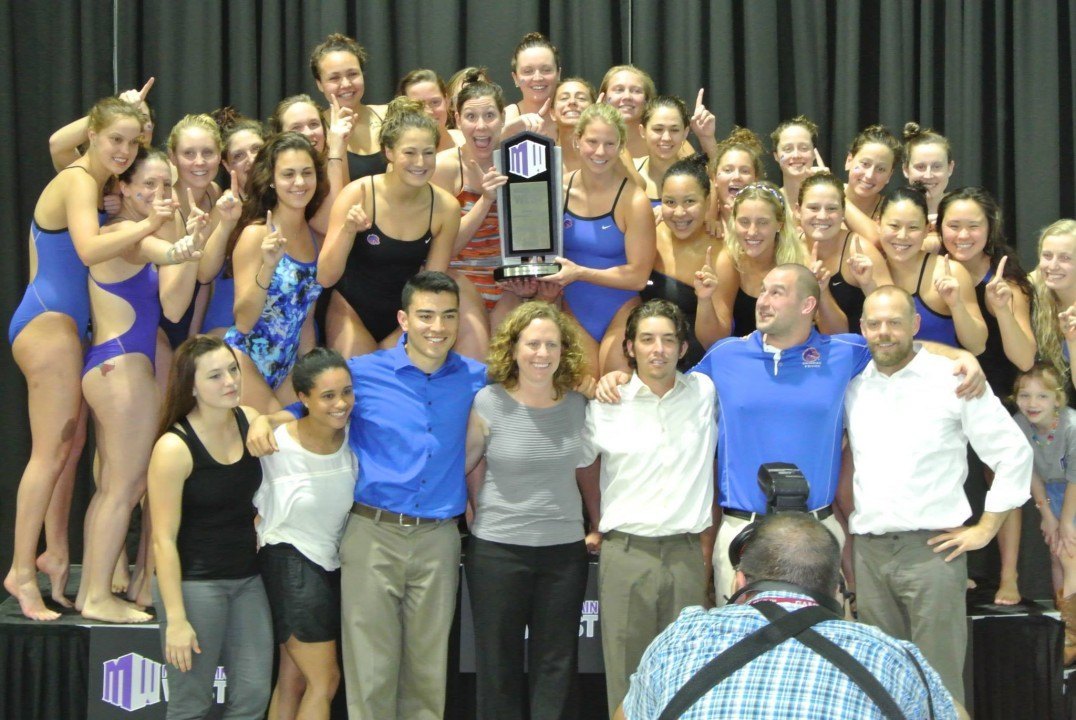 The Boise State Broncos, winners of four conference championships from 2009-2014, are among the teams that have expressed interest in joining the Big 12. Archive photo via Boise State Athletics

ESPN’s Brett McMurphy reported late last week that the Big 12 Conference is entertaining presentations from a whopping 17 schools about expanding the league – which cracks open the door for the first big conference shakeup since Texas A&M and Missouri left that conference for the SEC in 2012.

The Big 12 Conference doesn’t consider much outside of the revenue sports. Among the Power 5 Conferences, the Big 12 averages fewer NCAA-sponsored varsity sports (18.4 average, 18 median) than any other conference.

Editor’s Note: The Big 12 has 10 other schools who are affiliated in women’s rowing, wrestling, and women’s gymnastics, but have their own conferences for the majority of their sports, including swimming.

While the decisions will not be made based on swimming, swimming will be impacted. Texas is far-and-away the dominant power in the conference. Their “B” squad (which they’re allowed to enter at Big 12s) is the second best team in the conference. Further, any boost to football revenue gives some hope that the 5 schools without swim programs might add them; or that the 2 schools with women’s only programs might add a men’s program.

More than that, some of these schools, while historically mid-major programs, would offer a big boost to swimming in the conference. None of the 17 would immediately challenge the Longhorns’ dominance, but more than one have had success out of smaller conferences.

The SMU women have scored at NCAA’s 33 times. That’s all but two of the NCAA Championships there have been for women, including a high water mark of 2nd in 1996 – and 29 individual event titles. While they haven’t been as good the last few seasons, they have a top-20 finish in 2014.

The Boise State women have become regulars at the NCAA Championships as well – including scoring in 2011 and 2012. They don’t have a men’s team, however.

Connecticut, Cincinnati, and BYU are all trending in the right direction for national relevance in swimming.

The latest reports are that the Big 12 is looking to add two schools to become a two-division, 12-team league (although the NCAA dropped the requirement to have 12 members to hold a conference championship game). It’s possible, though rumored to be less-likely, that the Big 12 adds 4 teams to become a 14 team league – matching the SEC.

Geographically, Houston (which has a Big-12 worthy aquatics facility already) and SMU (which is building one) make the most sense, however the Big 12 already has a strong foothold in the Dallas and Houston television markets thanks to the University of Texas and Oklahoma University, so they may not provide the biggest benefit demographically.

Those schools also have the benefit of historical rivalries with current Big 12 members Baylor and SMU in their favor.

Below, see a chart of all 17 interested schools, along with relevant details about their swimming programs.

Just a (small) heads up – I think you may have the Men and Womens results from the AAC backwards. (ECU men won and SMU women, for example)

it will now be referred to as the Big 29

this will depend heavily on football. BYU and Boise seem to make the most sense

pvdh – while those are probably the BEST football programs, they’re also from among the smaller television markets of those teams. I think Cincinnati, the Florida schools, Memphis, or even Connecticut or Colorado State could make sense if they thought that would give them a foothold in those bigger television markets.