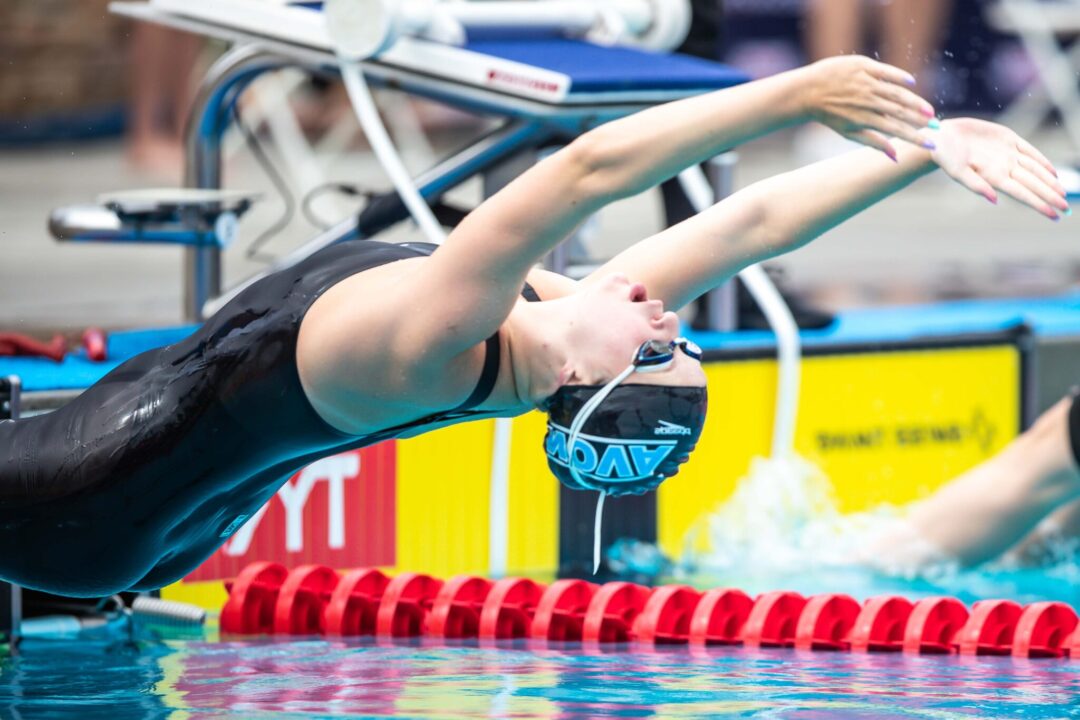 Teagan O’Dell clocked a few of the fastest times this season among 15-year-old girls during the 2022 So Cal Invite last weekend in Irvine, California.  Archive photo via Jack Spitser/Spitser Photography

Teagan O’Dell clocked a few of the fastest times this season nationally among 15-year-old girls during the 2022 So Cal Invite last weekend in Irvine, California.

O’Dell opened the women’s 200-meter medley relay with a 28.67 backstroke leg to help host Irvine Novaquatics claim first place in a total time of 1:56.57. Her split marked the third-fastest time this season for her age and improved upon her previous best by .17 seconds. Kaitlin Nguyen (33.42 breaststroke leg), Sammy Cummins (28.29 butterfly leg), and Ariel Lin (26.19 freestyle anchor) combined for the second-fastest time this season among 15-year-old girls.

In the women’s 400 freestyle, O’Dell placed second with a 4:17.67, shaving more than five seconds off her previous best to move up to No. 4 this season among 15-year-old girls. Her 55.66 split ranked as the fastest on her victorious 400 free relay squad that also featured Lin and Cummins along with rising Cal senior Ayla Spitz. O’Dell also placed fourth in the 200 fly with a 2:17.49, .12 off her personal best that ranks seventh this season for her age.

Twenty-year-old Blake Tierney posted a pair of personal bests for his University of British Columbia Thunderbirds squad. In the men’s 100 free, he lowered his personal best from prelims by nearly a second en route to a runner-up finish.

Tierney touched first in both the 200 back (2:03.03) and 200 free (1:50.69), the latter representing a personal best by .08 seconds. In the 200 back, he was nearly four seconds off his personal best in the event that almost earned him an Olympic berth last year. He went 1:59.49 at Canadian Olympic Trials to place second, but he wasn’t selected for the team because he missed the FINA ‘A’ cut. As a first-year student this past season for the Thunderbirds, Tierney swam the anchor leg for the men’s 400 free relay team that lowered the program’s own U SPORTS record in the event with a 3:29.74. Tierney’s UBC teammate, Liam Lawson-Honeyman, set a new personal best by more than two seconds en route to a first-place finish in the men’s 1500 free.

Sixteen-year-old Daniel Li swept the breaststroke events while setting personal bests in the process. The Rose Bowl Aquatics swimmer won the 100 breast in 1:02.58, third-fastest this season among 16-year-old boys and .27 seconds faster than his previous best. In the 200 breast, Li went .55 seconds faster than his previous best to win in 2:15.72, which ranks as the second-fastest time this season for his age. His Rose Bowl Aquatics group brought home more medals (18) than any club at the meet.

Rising University of Texas junior David Johnston also won multiple events at the meet. He triumphed in the 400 IM with a 4:17.59, four seconds away from his personal best, before winning the 400 free in 3:52.19 — just two-hundredths slower than his personal best. Johnston also qualified first in the 1500 free, but he didn’t end up swimming the final.

Soon-to-be USC sophomore Caroline Pennington showed off her distance freestyle prowess by sweeping the women’s 400, 800, and 1500 free events, but she was well off her personal bests in all three victories. Her teammate, rising USC junior Hanna Henderson, took first place in the women’s 50 free in 26.16, less than a second slower than her personal best.