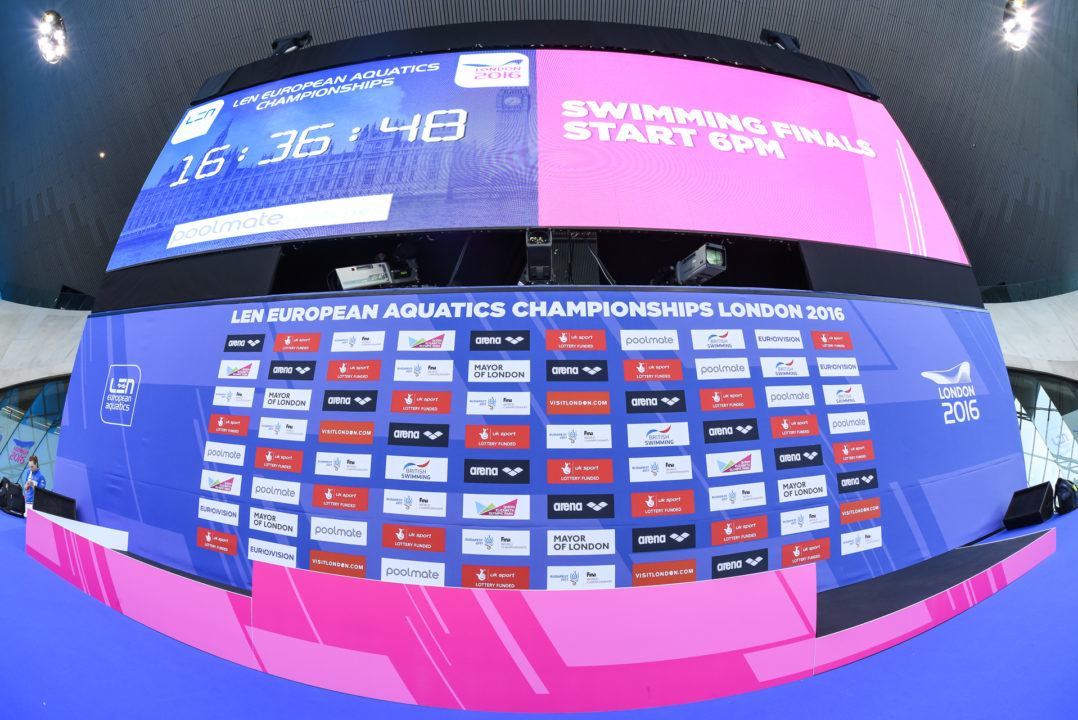 Hungarian 14-year-old Ajna Kesely advanced out of the semifinals of the women's 200 free with a blistering age group swim of 1:58.69 on day 5 of the European Championships. Archive photo via Peter Sukenik/www.petersukenik.com

Hungarian 14-year-old Ajna Kesely advanced out of the semifinals of the women’s 200 free with a blistering age group swim of 1:58.69 on day 5 of the European Championships.

Kesely was third in her heat, behind world record-holder Federica Pellegrini (1:56.73) and her Hungarian teammate Evelyn Verraszto (1:58.66). She now sits 7th overall and will be the youngest swimmer in the championship final by more than 9 years.

The Hungarian youngster turns 15 next September. For reference, her 1:58.69 is very comparable to the U.S. National Age Group record for the 13-14 age group – that record belongs to Sippy Woodhead at 1:58.53.

Kesely was a quadruple gold medalist at the European Youth Olympic Festival in Tbilisi, Georgia last summer, winning the 200 free, 400 free, 800 free and 200 fly. She also took silver in the 100 free.

She’s shown major improvement since that meet, though. Her winning 200 free time in Tbilisi was 2:01.84, more than three seconds slower than today’s time, which launches her onto the international stage at the senior level.

It’s been a huge week for Hungary, and Kesely’s poised swimming at a young age is another high point for the nation.

What is the world age record?

Maybe we must look at China. If not, Kesely’s time is probably the world age record.

Wow! Ai Yanhan can be OC if she keeps improving in that pace.
Is there a page somewhere on the internet with the world age records?

Ai Yanhan has also swum 4.07.77 last year at 13.
I don’t know if she’ll swim the 200 free in individual in Rio. She has the 3rd fastest time of the year in Chinese rankings so far. But I’m not a specialist of Chinese swimming at all and I don’t know how they make their olympic team. She will probably swim at least the relay. China has 7 girls under 1.58. 2 girls under 1.56. If they can replicate in Rio their times made at home, which is not always the case, they will be dangerous in the relay for at least the silver medal.

I’ve never found a page with the world age records.
To find that… Read more »

Its very similar to the development of the GDR girls in the past. For that reason Germany still has many “crazy” age group records (at least for german standards).
I think Kesely will reach the olympic final at 400 free and she will swim sub 4:05. Everyone who wants to earn a bit of money should predict a medal for her in Rio.

I would not bet that she makes the 400 free final in Rio. Too early. A medal? Lose your money if you want. Without me. 🙂

She has wonderful technique, I think she moves her head a little much when she breathes though. Maybe she will improve on that if her coaches work with her. Great closing speed..

Only pictures of Sippy Woodhead’s swim I’ve found. At 3 minutes 22 in the video. Very high stroke frequency. Amazing that no other 14-year-old American girl has broken that record since then. Despite all the technical improvements and the better training conditions overall.
https://www.youtube.com/watch?v=Z3j13TRVY0s

Woodheads swim was a world record