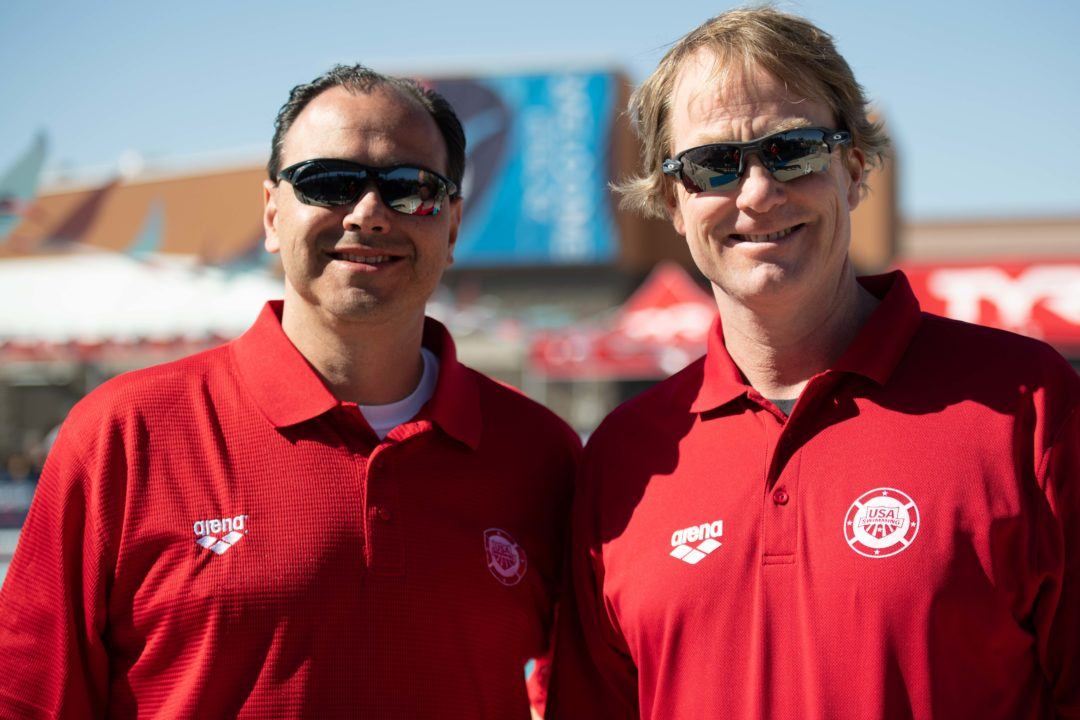 Under the newly-minted leadership of CEO Tim Hinchey, USA Swimming underwent some significant administrative changes, including a major morphing of the permanent National Team leadership and National Team Director role. Not much has changed in terms of  selections of national teams have changed, so far, including the announcement of selection criteria for the 2020 U.S. Olympic Team head coach.

One major change, however, is that USA Swimming has made the list of meets where coaches can earn the right to coach the Olympic Team much more specific than the previously-vague “high level competition” requirement. Specifically, the list of meets that a coach must have been a head coach for to be eligible for Olympic head coach selection:

This drastically narrows down the field of eligible candidates, and notably excludes the Pan American Games or Short Course World Championships.

USA Swimming says that they will contact eligible coaches who meet the criteria by May 6th, 2018 to gauge their interest. The name of a head coach, including the name of a replacement, will be submitted to the USOC on or before May 6th, 2019

The Head Coach Selection Committee will be made up of 4 individuals, who will propose the 2 selections (1 men’s team head coach and 1 women’s team head coach) to the National Team Managing Director and Chief Operating Officer; which is to say, Lindsey Mintenko and Mike Unger, at present.

USA Swimming’s CEO (Hinchey) will review the recommendations of Mintenko and Unger, and make final approval of the choices.

So with the 2018 Pan Pacs recently named, that distills down to a final list of 10 eligible male coaches and 2 eligible female coaches (a referendum on the gender ratios of coaches at the highest level of swimming in-and-of itself). All 12 appear to meet the rest of the criteria, including having athletes on the 2017-2018 National Team (though one could argue that Hite’s departure from Wisconsin leaves him, at least temporarily, outside of the “currently coaching at the national level” criteria).

The new specific criteria also limit the ability to pull head coaches from past coaches, like Eddie Reese, who was the men’s Olympic head coach in 2004 and 2008, or Gregg Troy, who was a head coach in 2012, and instead focus on the more recent leadership of USA Swimming’s major international teams. Those coaches would still be eligible for assistant positions on the Olympic team, which are usually selected largely based on results of the Olympic Trials.

That is dumb. Whoever is sending the most olympians to the team should be top candidates. I don’t see a problem with the way they used to do it

I don’t remember it ever having been done the way you describe – but I’ll admit I don’t know what the selection criteria was much before 2012. The reason to not do it that way is that waiting until after Trials means that the head coaches aren’t named and don’t have time to plan and communicate with athletes’ coaches, etc. until 6 weeks before the Olympics. There may also be administrative limitations placed on naming Olympic Team head coaches and that they might need to be chosen earlier, per directive of the USOC or IOC.

Not saying that’s the way they did it, just that they should be candidates

I believe that is generally how assistant coaches are selected. Seems to give the head coach time to prepare and makes plans while also including the “hot coaches” who have swimmers doing well at the meet.

So no Bauerle or Troy?

That’s correct, no Bauerle or Troy.

Thanks. Just wondered. It is going to be Meehan and Durden IMO

those 2 seems to have done an Incredible job in Budapest ( best Usa haul of medals ever at a world champs !!! ) but i would love to see someone like Troy as well – unfortunately , he is not on the list .

The idea seems to be that there’s a difference between being a “good coach” and being a “coach that has led a team at an international meet as a head coach and dealt with that decision making and administrative process before.”

Vote Up39-8Vote Down Reply
pass gas in the fast lane

I think you make a good point, but braden is absolutely correct. it is extremely difficult for a coach at their first international meet. I know two coaches who have taken teams to international meets. both had hiccups their first time. the rule makes sense. plus, I could see baurle doing it, but would eddie really want to be the coach for an international team? he’s old and has a LOT going on in Austin. don’t see him wanting that.

Regardless if he wants it or not, he is qualified for the job and should be allowed to be considered if it’s something he wants to do.

Vote Up20Vote Down Reply
pass gas in the fast lane