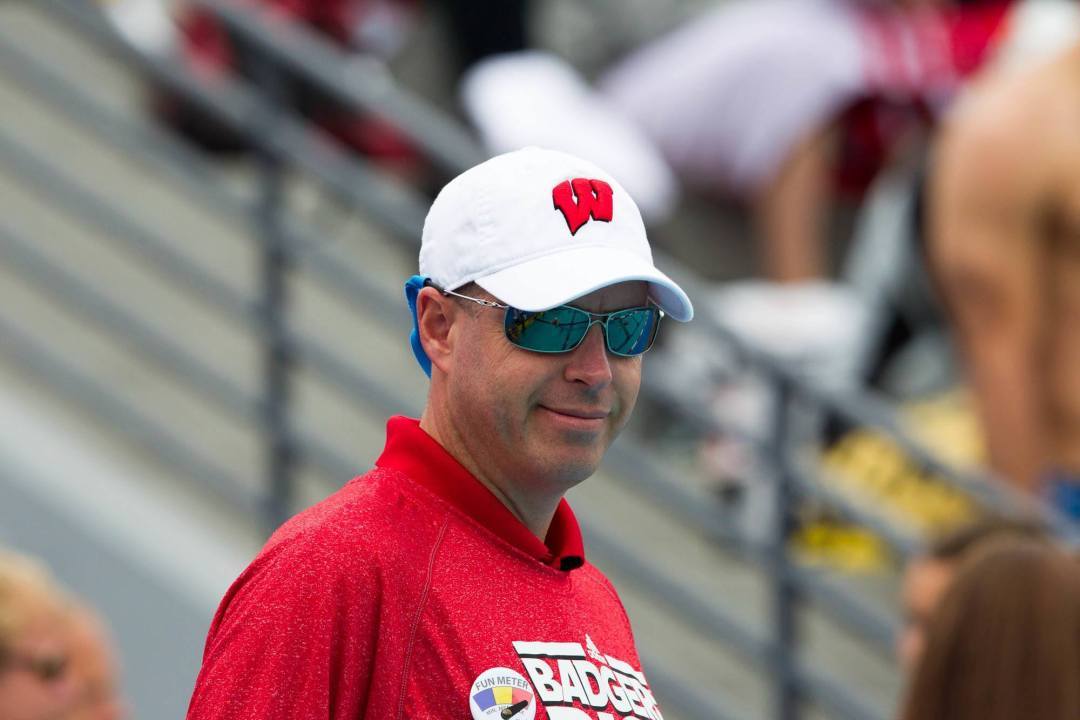 Whitney Hite will not return as the University of Wisconsin swimming & diving coach next season, the school confirmed on... Archive photo via Tim Binning/TheSwimPictures.com

Whitney Hite will not return as the University of Wisconsin swimming & diving coach next season, the school confirmed on Saturday. That means that this week’s NCAA Championships will be his last as the program’s head coach, ending a 7-year run with the program. The move is expected to be formally announced at Monday’s weekly athletics department press conference.

Hite was hired in 2011 to replace Eric Hansen, who left to take over at Arizona (where Hite’s previous job was as an assistant working with the middle distance group). While the men’s team hasn’t yet scored at this year’s NCAA Championship meet, the women’s team finished 17th with 78 points, including a 2nd-place finish from Beata Nelson in the 100 backstroke. Nelson broke school records in the 200 IM (1;53.54) and 200 back (1:49.27) and broke another in the 100 back (49.78) at Big Tens – making her the only woman to go sub-50 seconds in the event 3 times.

Hite’s tenure at Wisconsin has seen successes and challenges. The team finished in the top 15 at the NCAA Championships in each of Hite’s first 4 seasons as head coach, including a high of 13th in back-to-back years in 2014 and 2015. His tenure also saw Drew TeDuits win the 2013 NCAA title in the 200 backstroke – the Wisconsin men’s 3rd-ever event title and first since 1959. The men’s team also had a high mark of 13th in 2013, the same year as TeDuits’ title, and were 18th in each of the last 2 seasons. Victor Goicoechea, a transfer from Hawaii, will swim the 1650 on Saturday afternoon as the 27th seed. He’s the team’s only entrant at this year’s meet, and added time to place 38th in the 500 free. If he doesn’t score, it will mark the first time in Hite’s tenure that either team hasn’t scored at NCAAs.

The team has also had a very high rate of attrition. The table below shows our counts of how many swimmers from each freshman class (men and women combined) that didn’t finish all 4 years of their collegiate swimming careers at Wisconsin. The year refers to the class’ freshman season:

Not included in those numbers is Cierra Runge, a 2016 Olympic gold medalist and former NCAA Record holder who transferred to Wisconsin from Cal, and then transferred out again after 1 season with the team.

Wisconsin is expected to open its new indoor natatorium some time next season.

This program is destined to blow up. Beautiful campus, tremendous academics. Go Badgers!

He has done a remarkable job with Auburn?!???

To be honest, I’m not sure you can measure how any assistant at Auburn has done.

That’s a mistake and a half if true. I bet they would have gotten good applicants

Gary Taylor would be a great fit!

Where does he coach?

He would be, but the chances of him leaving powerhouse NC State are extremely low