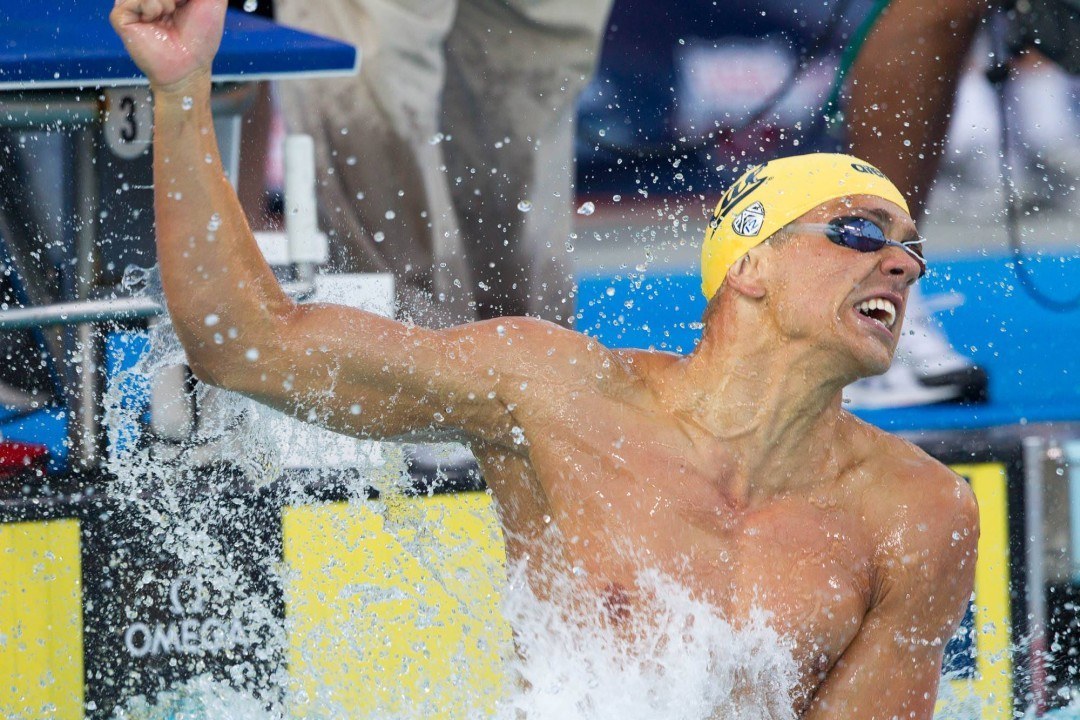 Tim Binning noticed this reaction by Tom Shields on Friday night. Nobody captures the reaction shots quite like Tim Binning. Current photo via Tim Binning/TheSwimPictures.com

Tom Shields is making his case for Swimmer of the Meet after three days at the 2014 U.S. National Championships in Irvine, California.

(1) The Cal post-grad Shields added a 100 fly win to his earlier win at this meet in the 200 fly. He swam a 51.29, pipping the great Michael Phelps by .01 seconds. The two probably won’t have a long time racing against each other, but for the couple of years that it lasts, this Shields/Phelps rivalry could really be something. Shields tied Phelps’ 200 yard fly record in his senior year at Cal, the two tied in the 100 fly at the Santa Clara Grand Prix earlier this year, and now Shields nipped Phelps by .01 in finals.

(2) Phelps has had some really good swims at this meet, even without a gold medal yet. The problem is that they’re all coming in prelims. Phelps still has the fastest time in the world in 2014, with his 51.17 from the morning heat. In both of his events so far, he’s added for the morning. There could be a number of factors here. Maybe he’s still shaking some of the racing rust off, maybe it’s a sign of where he’s at in his training, or maybe it’s just a sign of age – at 29, Shields has the edge of a touch more youthful energy.

Either way, it’s been a positive meet for the winningest Olympian in history. He’s made the team, which means that he’ll get his crack at Pan Pacs.

(3) This 100 fly was Tim Phillips‘ best chance at making the Pan Pacs team, as he finished 3rd in 51.54. Phillips’ 3rd-place finish, with its lofty World Ranking, should be good enough to get him on the Pan Pacs team. At this point, with how well SwimMAC is swimming, I wouldn’t count him out to bump one of those other guys at Pan Pacs and take a spot for Worlds. The whole two-year qualifying system can cause some stress for some swimmers, but the twists it can bring are intriguing as well.

Enough about the men’s 100 fly, let’s talk about the women’s 100 fly. The American women’s 100 fly is a shallow pool. Since Dana Vollmer has been not-retired but not-racing either, her Olympic counterpart Claire Donahue has been the lone face of the women’s 100 fly.  (4) But now Kendyl Stewart, a 19-year old from USC, has come along and beaten her in both of this sprint butterfly events at this meet, including a 57.98 on Friday night. The new world order in the 100 fly, with Sjostrom pushing from the front, is that less than 57’s at international championships isn’t going to cut it by the time Rio rolls around.

Donahue is definitely capable of that, but before Stewart (and to some extent the resurgence of Felicia Lee, who was 3rd), it wasn’t clear who was going to push Donahue to that level.

There’s some good young talent in American women’s sprint butterflying, and this might just be the spark they needed to start pushing those times down, and start turning the 59-lows into 58-lows. Expect swimmers like Kelsi Worrell, Gia D’Alesandro, Katie McLaughlin, and Cassidy Bayer to really start popping between now and the 2015 U.S. Open as a direct result of the Stewart wins this week.

We’ve talked a lot about how Chase Kalisz has improved the front-half of his IM, and that showed on Friday. But we should also be talked about how much (5) Tyler Clary has improved his breaststroke. A la Michael Phelps and Ryan Lochte when they got later in their careers in this 400 IM, Clary is taking his weakest stroke and really improving it without using a whole lot of new energy – he’s still going out very hard, but has just improved technically on the breaststroke.

(6) After seeing his 200 freestyle, I really thought Michael Weiss would finish higher than 6th in the 400 IM. It won’t phase him too much – he’s got his spot on the Pan Pacs team, and can now swim whatever he wants in the Gold Coast in a couple of weeks.

(7) Did anybody else noticed that Paul Powers is spending the summer training with SwimMAC Carolina? He came to Charlotte about three months ago after finishing up school in May. This means that he’s going to go from Andy Deichert, a former member of the famed Race Club coaching staff; to David Marsh, the architect of the Auburn sprint dynasty; to Mike Bottom, who was also with the Race Club staff and is one of the country’s renowned sprint coaches. With that lineup on his resume, if Powers can’t “make it big” in swimming before he’s done, then it just wasn’t meant to be.

(8) I still believe that Dax Hill could have a future in the breaststrokes if he really wanted to. He was 4th in the B Final of the 50 in 28.26 on Friday. In high school, it was his best stroke, and after abandoning it completely at Texas, he refound it a bit as a senior.

(10) SwimSwam’s very own senior reporter Jared Anderson finished 5th in the men’s 50 breaststroke final with a 27.91, and we’re quite proud of him. If he can repeat that placing in the 100 breaststroke, and make the U.S. National Team, he’ll probably get a raise. Also consider this fair disclosure that we are rooting for him, but of course we’ll still make every effort to report the results fairly. You wouldn’t really expect us to not root for him, right? At least we’re admitting it.

He could write the report on his own results and I still wouldn’t mind 🙂 Go Jared! Get that pay raise!

Well. I don’t know what to think of most of the finals. This week I have often been disappointed by the finals. Many swimmers struggle to swim faster in the evening. It’s curious. Some give everything in prelims. I have 15-year-old Sean Grieshop in mind. He swam a PB of 4.21 in the 400 IM prelims to qualify and had no more gas in final. Some swim fast without clear reasons. They could take the prelims more quietly. Cordes and McHugh on breaststroke for example. And there’s Michael Phelps. As you said, since the start of the meet, he swims very well in prelims. It’s a little harder in final. Either he hasn’t still found again that magic in the… Read more »

Other thoughts on day 3. Women’s 400 IM. Beisel and DiRado were great. Beisel must continue to improve her butterfly. If she wants to beat Ye Shiwen or Katinka Hosszu she has to do it. At least by 1 second. 4.32 is still a very good time. But she looked a little disappointed when she saw the results. I’m sure she targeted the American record. She has now qualified for Pan Pacs and she will swim the 200 IM without pressure. DiRado has fought until the end. Very decent time for her. Please continue swimming until Rio! Margalis with a new PB. She’s perhaps the favorite in the 200 IM. Leverenz never in the race. It was also very hard… Read more »

It’s a matter of experience for young Greishop. It will develop.

I had the impression Jack Conger was improving his times slightly this week? I know he hasn’t made any finals yet, but maybe he will today in the 100 back? Maybe SwimSwam can get you his e-mail and you can tell him his fans want him to focus on the 200 free so he can make the relay in Rio! 🙂 I’m in pain here trying to type with all my fingers and toes crossed hoping Allison will have a big swim in the 400 free, because I feel like she’s swimming a little better with each race; maybe her sprint speed isn’t there, but her endurance is? I think she’s older and needed more rest before this meet than… Read more »

Don’t jump to conclusions on young Grieshop. He scratched his races on Wednesday & Thursday, so there may be more to the story than you know. Besides, it is rare for a young swimmer to swim a PB in prelims and then swim another PB in finals!