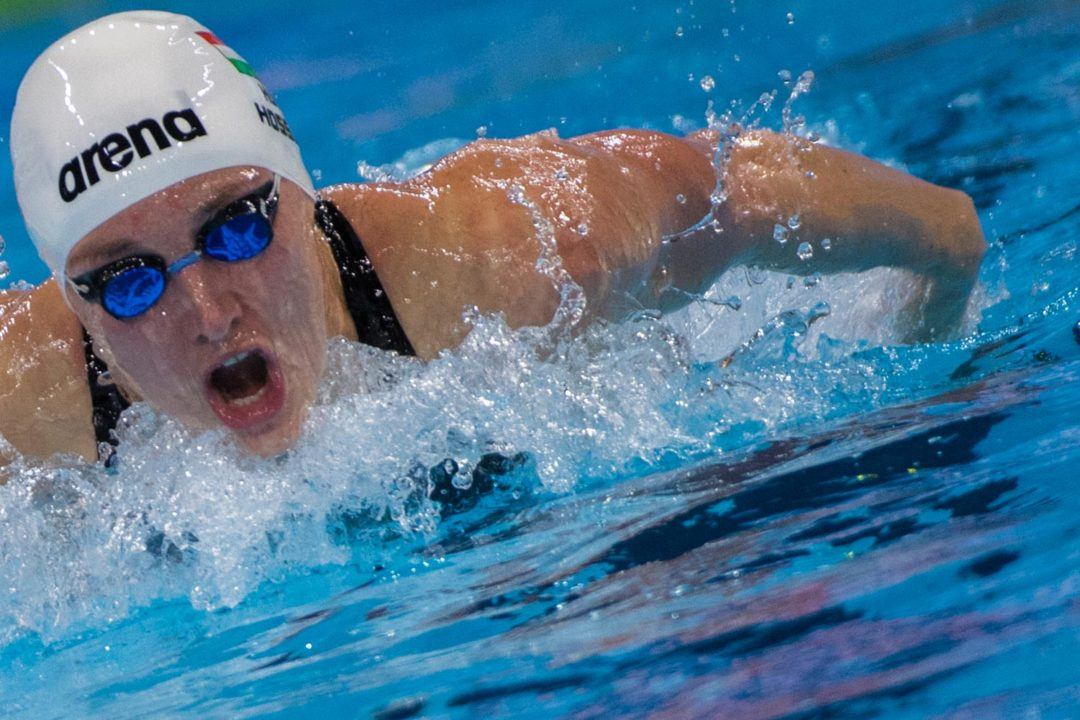 The actual leaderboard shows that many swim stars from all over Europe participated in one or two stops of the Golden Tour Camille Muffat so far – but  the start lists for this weekend present only a few international swimmers like Hungary’s  Katinka Hosszu, and David Verraszto, Belgium’s Pieter Timmers or Jeremy Desplanches (Switzerland, trains in France).

Nations like Japan and Great Britain just held their World Championships Trials and swimmers are preparing now for the season highlight in Budapest. Additionally, German swimmers are curerently focused with first priority on their upcoming qualification in 7 weeks.

Hungarian David Verraszto grabbed the win in the men’s 400m IM in 4:14.77, he is the actual number one in the FINA World ranking with his season best time of 4:10.01, only 0.11 seconds slower than his personal best time he set at the 2015 World Championships in Kazan 2015 when he won the silver medal.

The Iron Lady seemed to hit her groove in her next three races. Katinka Hosszu set the pace in the 50m backstroke with the winning time of 28158, then she came back less than 10 minutes later to win the B-Final of the 50m breaststroke in 33.13 and jumped again into the pool 15 minutes later for a fifth place finish in the 50m butterfly with a time of 27.11.

Belgium’s Fanny Lecluyse took the win in the 50m breaststroke in 31.59 ahead of France’s Charlotte Bonnet (31,87).

France’s Mehdy Metella touched first in the 50m butterfly in a personal best time of 23.58 – fast enough for the 11th place in the world ranking.

Leaderboard after the first two stages of 2017 FFN Golden Tour

First race for Hosszu tomorrow will be 200 free. It can happen to be a rematch between her and Charlotte Bonnet. In Nice less than a month ago it was a very close race where swimmers showed their best this season (1:56.81 and 1:56.98). If both swimmers are ambitious enough to push themselves strongly for the win ( that most likely can happen) then we can get a very good indicator of what form Hosszu in now. Her modest in season times showed during multi-event sessions are very little of help to make some estimates. Tomorrow can be very different thing at first race of the session, facing competition in the range not far from her personal best at this… Read more »

IMHO this season they focus only on technique at the different meets and don’t want the competition to know her real shape and event strength.
BTW that 28 mid in 50 back is not bad in the middle of such a schedule.

I was right: it was a race. Now I got some understanding where Hosszu stands at at her key events.

You have no way to know what I’m thinking 🙂 But if I chose to bet I’m pretty confident with that now. My opinion won’t be based exactly on today’s results, but i got some idea where she stands after tapering relative to her current personal bests
Wanna bet? 🙂

Dear RIEZ, I like people who are joking and am very careful with those who doesn’t appreciate humor. I think that you wasn’t joking by listening these times. My opinion is that that is what you most likely want her to achieve rather than you are ready to bet seriously. Because you are Hungarian or have some special ties with Hungary I won’t bet for you to lose but I agree that if I’m not right I will refrain any negative discussion of Katinka Hosszu for the period of three months 🙂 I would agree with you that she will avoid any doubles. Therefore it will be no 100bk and no 200 free. I haven’t seen her most recent races… Read more »

My point is – and yes, I am not joking, and yes, I have the advantage to speak Hungarian – that no one knows her agenda other than herself and her husband, nonetheless, whatever it is, we can be sure that she will get there. By betting I meant a pint or two. 🙂