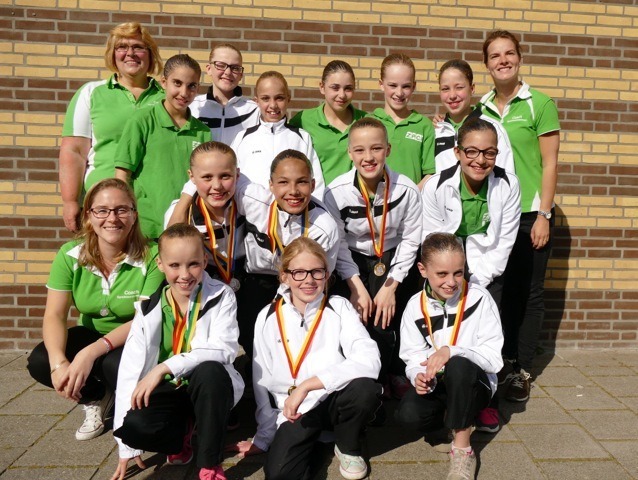 On Saturday, May 23rd, the Age 1 National Performance Youth Competitions took place at the De Veur swimming pool in Zoetermeer. Hoofddorp’s ZPCH made the journey with 13 swimmers and took gold with its first team, and silver in the duets and solos.
The ZPCH synchronised swimmers, in the age group 9-12 years of age, come from Hoofddorp, Nieuw Vennep and Hillegom and they proved last Saturday in Zoetermeer that in this category of age group, they are competing well and the club is taking the lead (so far this season) in all competing age ranges.

The National Youth level’s focus, last Saturday, was on three disciplines: solo, duet and group. 17 soloists competed. Maria Lorenzini of AZC (from Capelle) got gold. The silver was won by ZPCH’s swimmer Noortje Reijnen (from Hoofddorp). With a lead of almost 3 points, she remained ahead of bronze winner Emma Haverdil, from the Beuningen club Cadans.

There were 15 duets. Femke Vos (from Hoofddorp) and Zärrin Sahertian (from Nieuw Vennep) represented ZPCH and won a silver medal, one point behind ACZ’s duet Floor Schallenberg and Maria Lorenzini who were more than one point ahead of the duet of Alphen aan den Rijn’s AZC.

ZPCH had two teams competing in the group section, highlighting the club’s approach to the sport: a talent team and a recreational team. Of the 15 participating teams, ZPCH’s first team won a gold medal. The team consisted of five swimmers: Noortje Reijnen, Femke Vos, Xenna Mackay, Ilse de Heij (all from Hoofddorp) Zärrin Sahertian (from Nieuw Vennep), and one reserve swimmer, Sanne van der Waal. A standard group size should consist of 8 swimmers. A half point is deducted from the total score for each missing swimmer. Despite a one and a half point deduction, the ZPCH team was a point ahead of Cadans’s team and was more than five points ahead of ACZ’s team.

ZPCH’s second team was made up of seven swimmers: Lina Baoudi, Joy Favie, Sylvia Veeneman, Mette Bos (all from Hoofddorp), Marin Hokke, Orane Brunsting (from Nieuw Vennep) and Adrienne van der Brugge (from Hillegom). They came in a very decent 10th place in the overall ranking.

Charlotte Brand was present in Zoetermeer as ZPCH’s head coach. Brand stated: “With our teams taking gold and 10th place, and silver for our soloist and duet … that is what you really sign up for, don’t you? It is the reward for all the consistent hard work in the training sessions, parties that you have to cancel, giving full priority to your sport. It also shows that ZPCH’s talent and recreational teams go hand in hand. The pride and joy which the swimmersradiate is great to experience. It all adds up to the good vibe in preparation for the Synchrobeat, the Dutchchampionships that are taking place in Eindhoven at the end of June. Our Whitsun weekend could not get any better. ”