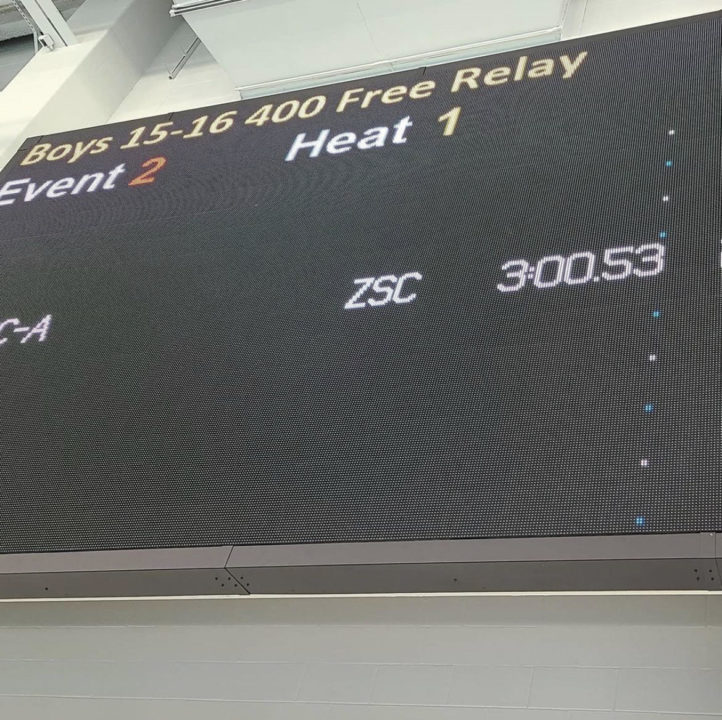 Zionsville Swim Club broke the boys 15-16 National Age Group Record in the 400 free at the OLY Winter Invite last night. Charlie Krone (16), Will Raches (15), Jack Donovan (16), and Will Modglin (16) teamed up to post a 3:00.53, breaking the record of 3:01.01, which was held by an Upper Dublin Aquatic Club squad featuring Mike Thomas, Wyatt Amdor, Jake Sannem, and Michael Jensen.

Here is a breakdown of the splits compared between ZSC’s relay and the 2014 relay from Upper Dublin Aquatic Club:

Here is the webcast from the finals session on Sunday night. The relay is right at the beginning, around the 1:50 mark.

The sequence of events that led up to ZSC breaking this record is unusual. Will Raches switched teams this fall, coming to ZSC. Per USA Swimming rules, when a swimmer changes team, they will be unattached for 120 day after their last meet with the previous team. For Raches, his final meet with his old team was on August 14th. That made yesterday (December 13th) the first day in which Raches would be allowed to become an officially attached member of Zionsville Swim Club. However, Raches had to compete at the OLY Invite unattached, because when the meet started on Thursday night, he was still within his 120 days. Swimmers can’t become attached to a new team during an ongoing meet, so ZSC had to create a time trial session and get it a separate sanction from the OLY Invite in order for Raches to be an officially attached swimmer.

This was actually the 2nd attempt at the record for ZSC. they first tried to crack the record after the Sunday AM session, but fell just .09 seconds short, finishing in 3:01.10. They came back completed the task just before the start of the Sunday evening finals session.

I love seeing this program getting the job done. A lot of people outside Indiana don’t know this, but Zionsville is a neighboring school district to one of USA Swimming’s top clubs, Carmel Swim Club. Zionsville’s high school and club coaches are doing a great job of working together and coaching their kids up to keep them in their program, unlike other clubs in Indy.

Do you have any sort of data to support your statement that kids are leaving clubs to swim for Carmel?

And you’d be wrong…. but congrats to ZSC swimmers and coaches. This is about them. Awesome job. Fast relay!!

carmel had what to do with this?

Congratulations to these athletes and coaches. What a super accomplishment! Remember to keep Indiana University and GOAT Coach, Ray Looze, on your radar when selecting schools…

Bro how was your relay split so much faster than your flat-start time?? Congrats!!

I guess it was just one of those days. But great job.

Hi! I’m confident he can go faster in the individual race. We are excited to see what this season brings!!

yea William … yes you all did. Congrats!

Time for me to retire