Zeiger, Schooling get to 5 wins each on final night of Southern Premier Meet 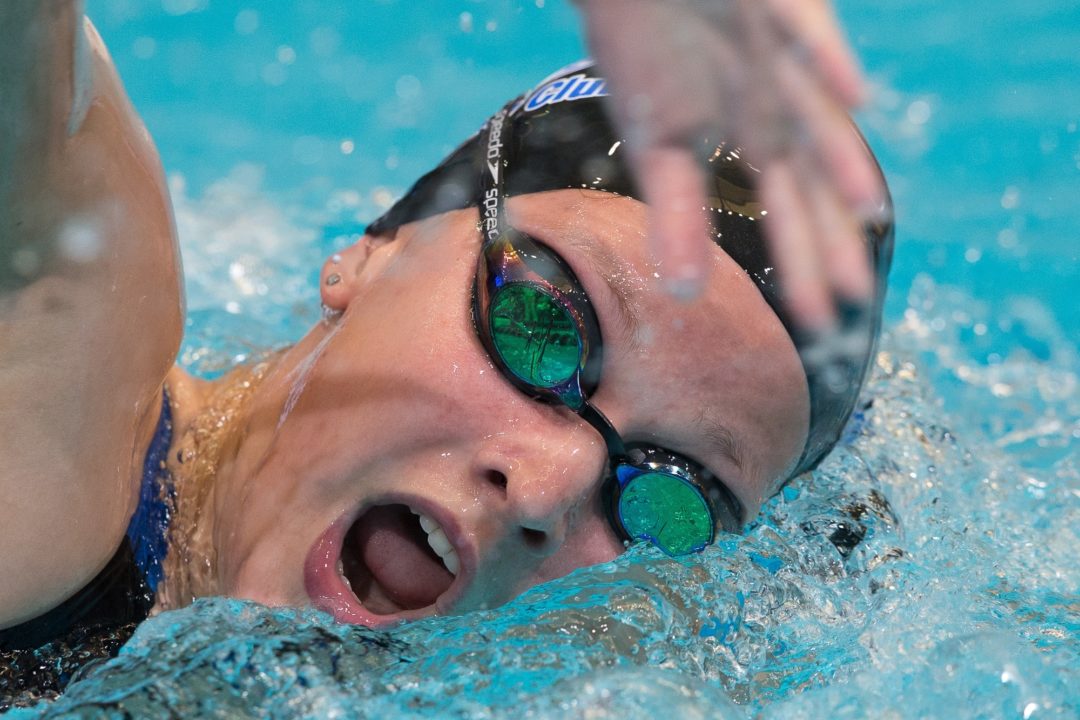 Brooke Zeiger and Joseph Schooling won two events each on Sunday night to wrap up the Southern Premier Meet in Knoxville. Archive photo via Tim Binning/TheSwimPictures.com

The final night of action at the Southern Premier Meet in Knoxville, Tennessee saw a combined four more wins for age group superstars Brooke Zeiger and Joseph Schooling, each of whom has been on a tear through the meet’s events over the course of the weekend.

Zeiger won two races to bring her weekend total to 5 at Sunday night’s conclusion. She cut nearly two and a half seconds off her lifetime-best in putting up an impressive 1:54.77 to win the 200 back early in the session. The Bluefish 18-year-old then came back to win the 200 breast in 2:15.52. Those two wins added to previous victories in the 200 IM, 500 free and 400 IM for Zeiger, who will compete for the Minnesota Golden Gophers next fall.

That 200 breast turned out to be a tight race for Zeiger – Lakeside’s Leah Stevens actually led early with her teammate Peyton Greenberg trailing and Zeiger running third. Greenberg took over during the third 50, but then Zeiger made a frantic comeback over the final 50 yards to seal the win.

Schooling, a Texas Longhorns commit, won his 4th and 5th individual races of the weekend. The Bolles School Sharks senior first paced the 100 free in 44.65, an easy victory, before coming back to win the 200 fly in 1:46.89. With relays included, that puts Schooling at 7 wins for the meet.

In addition to Zeiger’s two wins, Bluefish also got a 200 back win from Connor Green. Green put up a career-best 1:44.41 to crush the field by almost four seconds.

The women’s relay went to the Bolles School – Kasey Schmidt, Claire Rasmus, McKenna DeBever and Jessica Hodgson combined to go 3:24.05, getting 50.5s from both DeBever and Hodgson and a 50.9 leadoff from Schmidt.

Hodgson and DeBever went head to head in the open 100 free. Although DeBever would put up a slightly faster relay split, it was Hodgson who won the open event, going 50.32 to DeBever’s 50.58.

Conejo Simi’s Anna Quinn was the final individual winner in the open age bracket, going 1:59.38 to run away with the 200 fly.

The 12&Under category turned into a strong all-around night for Addie Rose Bullock of Tidal Wave Swimming. The 12-year-old won a pair of events at the end of the night. She took the 50 breast in 32.75, just off her lifetime-best for her fifth win of the weekend. Later on she added the 100 fly to her medal total, winning in 58.81.

Kallie Chelsvig of Nashville Aquatic Club had a solid night herself. She won the 100 back with a 1:00.84 and also took second behind Bullock in the 100 fly to close the night. In between, she was a narrow second in the 200 free to Tennessee Aquatics’ Abbey Aycock. Aycock, 12, took second behind Chelsvig in that 100 back but rose to the top of the pack in the 200 free with a 1:59.36. Chelsvig went 1:59.55 for second place, a drop of over three seconds.

Brooke is indeed a “superstar” – the sheer number of events she swims at every meet (and wins) is amazing. Amazed by Schooling, too!