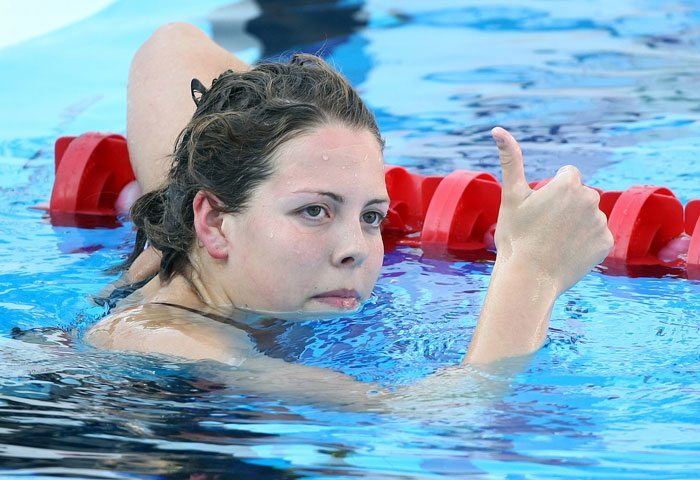 Lauren Quigley (above) and Sophie Allen are two big pieces of the future of British Swimming, and both are headed to new training grounds. (Photo Courtesy: British Swimming)

The future of Britain’s backstroke group, 17-year old Lauren Quigley, has moved back home and will resume training with the Stockport ITC, in the same pool as the Stockport Metro club where she began her swimming career a decade ago, coached by Sean Kelly.

Quigley is the 17-years old and 16-years old British National Record holder in the 50 backstroke, and in 2012 and 2013 has moved further down the road toward international stardom. She took the silver medal at this summer’s U.S. Open, as part of a Junior British squad who traveled to Indianapolis for the meet, besting swimmers like two-time NCAA Champion Cindy Tran. She was also the 2012 British Open Champion in the 50 backstroke (28.15), the Flanders Cup champion from January, and finished 4th at last year’s Olympic Trials in a race that is arguably the deepest in Britain.

Quigley had been training at City of Manchester Aquatics along with her brother, Grant, who at 19 is also a high level British swimmer (1:53 in the 200 free). Her new training site at Stockport is loaded mostly with stars of the men’s British squad, including 100 fly National Champion Michael Rock and Olympian James Goddard. The move is not a lengthy one – Stockport is a large Southeastern suburb of Manchester.

Three of the team’s most well-known swimmers have left the program since London. That’s David Carry (retirement), Keri-Anne Payne (return to Scotland with husband Carry, training at Warrender Baths), and Sophie Allen.

Allen is the other most recent revelation of a move, as she leaves the program that just added a new star. Her move, though, will be much bigger: she’s headed three hours south to the Bath ITC (about 100 miles due west of London), a program led by David McNulty and Graeme Antwhistle

For Allen, there might not be a better training group in the country for a breaststroker/IM’er as she is, at least in terms of day-to-day practice competition. She will train with the likes of Stacey Tadd, winner of the 200 breast at the Olympic Trials, and fellow Olympian Siobhan-Marie O’Connor.

Allen said no more of her move than a simple “Stockport wasn’t working for me anymore,” though it led her to a wildly successful 2012 season. First, in the spring at the European Long Course Championships, she took silver in the 200 IM. She then finished in the same position at Britain’s Olympic Trials to make their Olympic team. She didn’t have an ideal performance in London, adding three seconds to swim a 2:14 and stall out in prelims, but the year was still a huge stepping stone and leap forward from where she had been.

In December, she swam the breaststroke leg on the National Record breaking 400 medley relay at the Short Course World Championships, splitting 1:05.90.

Quigley will be working with the ITC at Stockport (one of five Intensive Training Centres set up by British Swimming). The ITC Head Coach is Sean Kelly. Richard Blackshaw is head coach of Stockport Metro swimming club. SM and the ITC share a pool.

The ITC in Bath that Sophie Allen has moved to has David McNulty as Head Coach and Graeme Antwhistle as assistant. Mark Skimming is head coach of the Universty of Bath team.

I agree,I just contacted Mark and he won’t be coaching Sophie Allen, she’ll be at the training centre there and he coaches the University team.

Thanks braden for writing about other countries as often as you do. Sun’s problems, Australia’s bonding camp on gold coast, canada getting a new grand poo-bah and british swimmers bouncing around…..all in the past few days.

Good Luck to Sophie Allen – Bath is beautiful and Mark Skimming is a great coach. Look forward to hearing big results in the upcoming year.