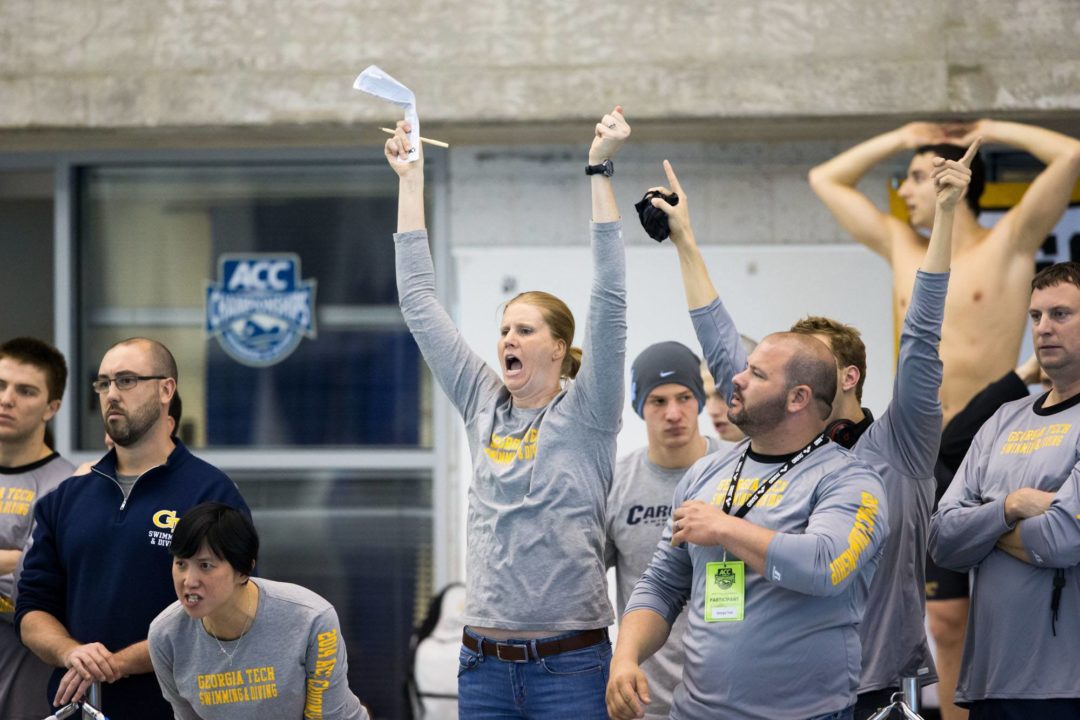 “I chose Georgia Tech because of the great coaches, incredible team atmosphere, and the fantastic academic and other opportunities outside of the pool. I would like to thank my parents and coaches for helping me through this process, my teammates for pushing me every day and supporting me, and the coaches at Georgia Tech for giving me this amazing opportunity. Go Jackets!”

Whalen also swims under Coach Bill Christensen at North Texas Nadadores, where he is primarily a middle distance swimmer with a focus on the 100 and 200 freestyles, 200 back, and 200 fly. At the 2015 Texas 6A High School State Championships, Whalen placed tenth in the 200 free and 15th in the 100 free and was on both Southlake Carroll’s freestyle relays. His top times include:

Whalen has had phenomenal time drops over the last year, to the tune of 2-3 seconds in every event in both short-course and long-course seasons. More impressive still was his 9.3-second improvement in the 400y IM. With his versatile repertoire, Whalen should be able to move into whatever holes Hart and Koppelman need filling. Already nearly all of Whalen’s top times make the Georgia Tech top-ten list for the 2014-15 season; if he continues to develop as he has over the last year, he will be a major contributor to the Yellow Jackets’ efforts at conference.

Yos swims under Coach Brian Pajer at Aquazot Swim Club in Irvine and attends Lutheran High School in Orange where he is a two-time USA Swimming Scholastic All-American.

Yos had a breakout season as a sophomore in high school, earning his first bid to Juniors. The following season he fell ill at Juniors, his championship meet, and consequently his in-season unrested times stood out at his fastest. Like many of the profiles coming from AZOT, Yos excels in 2/4 IM and 1/2 back, but he also has developed into a strong distance freestyler.

Huge pickup for the yellow jackets in Austin Whalen. He not only excels in the pool, but also in the classroom. The dedication this guy shows towards his studies is something everyone that knows him looks up too. He once pulled three all nighters in a row all to study for a quiz in biology, all while keeping up with his televisions series “it’s always sunny in Philadelphia.” I am certain that he will continue this dedication as a yellow jacket next fall and that the coaches there will fall in love with Austin.

I’m not sure if pulling three all-nighters is something to be admired. It’s unproductive and potentially a sign of poor time management.

As a former NCAA scholarship swimmer, pulling all-nighters to study for exams, quizzes, etc. is not unusual for any athlete, but is arguably quite typical for swimmers who value an education in the NCAA. DMSWIM should appreciate (as member or affiliate of the rival Dallas area DMSWIM team?) that swimmers have less time than most student athletes to study. Morning and afternoon/evening workouts cut out huge amounts of time and Austin should be commended for valuing his studies as much (or perhaps more) than his swim times! All-nighters may not be productive for some, but when necessary, they can get the job done. Swimmers who value education and maintain good/great grades like Austin Whalen are perhaps some of the best… Read more »