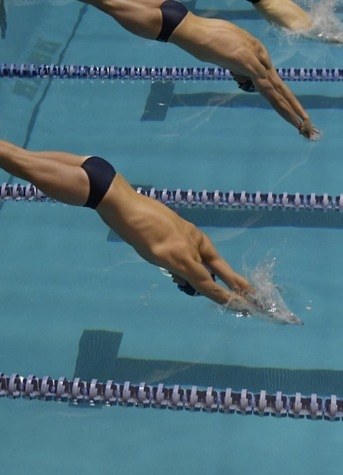 The Yale men’s swimming and diving team took victory, 193 – 107, in a dual meet over Cornell on Sunday. The team remains undefeated in the Ivy League after a day of great performances at Cornell.

The Bulldogs also found success in the relay events against Cornell. In the 200-yard medley relay, Yale took second and third with times of 1:30.60 and 1:33.86 respectively. Moreover, the team captured first and third in the 400-yard medley relay.  Yale’s winning relay clocked in at 3:04.45, over three seconds ahead of the next finish.

Continuing the momentum of the team, senior Ben Lerude took first in the 1000-yard freestyle while freshman Matt Slabe followed up for second.  Lerude’s time of 9:33.15 was over 10 seconds ahead of his Cornell opponent and he went on to take runner-up in the 500-yard freestyle.

Rounding out the freestyle events, Yale’s sprinters scored critical points for the team.  Junior Aaron Greenberg placed first in the 50-yard freestyle with a time of 20.34, almost half a second ahead of his opponents. Meanwhile, sophomore Scott Bole took runner-up in the 100-yard freestyle at 46.28 with freshman Henry Gaissert close behind in third at 46.43.

The Bulldogs saw similar success in the butterfly events. Freshman Duncan Lee won the 200-yard butterfly with Schultz just behind in the second. Meanwhile, Greenberg branched out from his sprint freestyle events to take first in the 100-yard butterfly ahead of Bole in second.

Not to be outdone, Yale’s breaststrokers captured wins throughout the meet. Juniors Jonathan Rutter and Derek Kao battled it out for runner-up in the 100-yard breaststroke; Rutter out-touched Kao at 56.84, just five hundredths of a second ahead. Rutter also took first in the 200-yard breaststroke with Kao following in third.

Building on his earlier performances, Rutter went on to win the 200-yard individual medley. He led Yale’s one-two-three sweep in the event, with freshman Tristan Furnary and Lee in second and third respectively.

Following their most recent win against Cornell, the Bulldogs will be 5 – 0 in the Ivy League. The team will be taking on Harvard and Princeton at the annual HYP meet in early February to conclude their dual meet season.

I’d be willing to bet that they will not be taking on Princeton this year at HY.

Yea but Princeton will be undefeated. BTW who did Yale beat? No team worth mentioning! Ha if they want to swim real teams should travel South to the SEC!

Princeton actually finished their season with a 2-3 record