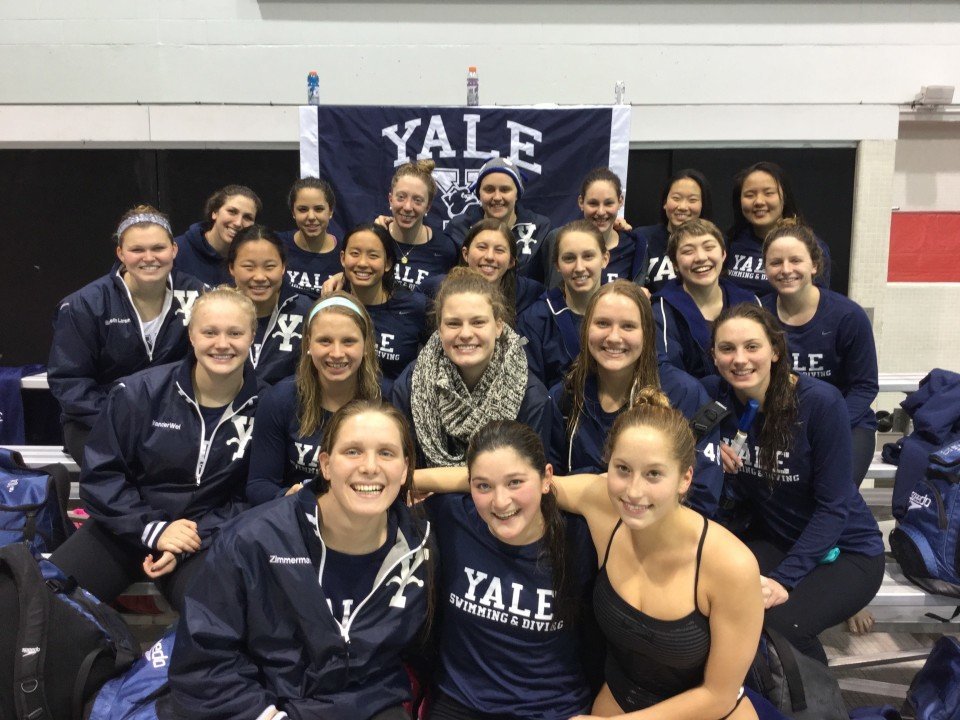 Yale has finalized the 2015-16 schedules for its women's and men's swimming and diving teams. Archive photo via Yale Sports Publicity

NEW HAVEN, Conn. —  The Yale men’s swimming and diving team has finalized its schedule for the 2015-2016 season. The challenging slate of meets will give the Bulldogs chances to compete against some of the nation’s best programs as they build upon their third-place finish at last season’s Ivy League Championships.

After an early scrimmage with Johns Hopkins on Oct. 17, Yale opens its regular season with a home meet against Brown on Nov. 7 at 12:00 p.m. Yale is jumping into Ivy League competition earlier than usual this year, and the team looks forward to starting out with an exciting meet in front of a spirited home crowd at the Kiphuth Exhibition Pool.

On Nov. 14, the Elis will travel to New York for a meet with Columbia. On their last trip to Uris Natatorium in 2013, the Bulldogs lost to the Lions by a razor-thin margin of six points after falling short in the final relay. Yale got its revenge last year with a 174-126 win in New Haven.

“The Yale/Columbia meet always brings out the best in both teams,” assistant coach Kevin Norman said.

This year the Elis will make their first appearance at the Janis Hape Dowd Nike Cup Invitational in Chapel Hill, N.C., where they will take on some top-flight programs from across the nation. Last year’s meet featured Duke, UNC and N.C. State from the ACC;  South Carolina and Tennessee from the SEC; and talented teams from the U.S. Air Force Academy and the U.S. Naval Academy. The meet will take place over three days, from Nov. 19-21.

“The Nike Invitational is another opportunity to provide our guys with more competition,” Norman said.

“In order for this program to reach its full potential, we need to challenge them constantly.”

On Dec. 5, the two best swim teams in the state of Connecticut— the Yale Bulldogs and the UConn Huskies— will go head-to-head for the first time in five years. They will travel to the Rutgers University pool in Piscataway, N.J., for a tri-meet, joined by another group of “canines”— the Boston University Terriers. Swimming fans from across New England will be eager to see how this one plays out.

Before heading into final exams, the Yale swimmers and divers will host a dual meet with their close neighbors from SCSU on Dec. 11. They will return to competition on Jan. 6 with another home meet, this one against the up-and-coming Cornell Big Red.

On just three days’ rest, the Bulldogs will face two more Ivy League opponents at a meet with Dartmouth and Penn in Philadelphia on Jan. 9. Next up is a rematch with the Penn State Nittany Lions, whom Yale upset in a memorable 181-172 victory last season. This year’s meet will take place at the Kiphuth Exhibition Pool from Jan. 15-16.

The “HYP” meet against Harvard and Princeton will be held on the Tigers’ home turf in New Jersey from Jan. 29-30.  Norman said that the impressive depth of all three teams is a testament to Ivy League’s rise to the forefront of  NCAA swimming in recent years.

As always, the Ivy League season will conclude with the conference championship meet, which will be held this year at Brown in Providence, R.I., from Feb. 25-27.

If any members of the team qualify for the NCAA Championships, they will be in Atlanta from Mar. 24-26 to compete at Georgia Tech’s Coach Herb McAuley Aquatic Center— the facility built for the 1996 Olympics.

NEW HAVEN, Conn. — The 2015-2016 meet schedule for the Yale women’s swimming and diving team has been established and the official season is set to begin on October 1.  The schedule includes meets against both Ivy and non-Ivy teams as preparation for the Ivy Championships in February and the NCAA Division I Championships in March.

The team boasts a strong incoming class of freshmen, including six new swimmers and two new divers.  They will join an experienced group of seasoned athletes and the combination looks to be the strongest the team has seen in recent years.  Captain Emma Smith will lead her teammates in their goal to improve upon last year’s tight third-place finish at the Ivy League Championships.  The Bulldogs are also hoping to qualify a record number of athletes for the NCAA Division I Championships in March.

Robert J.H. Kiphuth Head Coach of Women’s Swimming, Jim Henry, Assistant Coach Kerry Smith and Head Diving Coach Chris Bergere are all excited about the potential of the current team and what the 2015-2016 season holds, especially since it involves some new competition.

“We are excited to add teams from the ACC and the Big Ten conferences to our schedule.  It will provide an increased level of competition that will prepare us to race and  compete at the Ivy League and NCAA Championships,” said Jim Henry, the Robert J.H. Kiphuth Head Coach of Women’s Swimming.

The Bulldogs will kick off the season with two scrimmages in mid-October, one against The University of Connecticut in Storrs, Conn., on Oct. 16, and the other at home against The Johns Hopkins University on Oct. 17.

The two scrimmages will prepare the Bulldogs for their first taste of Ivy League competition; they will compete against Brown in their Ivy League opener at home on Nov. 7.  One week later, they’ll take on Columbia on Nov. 14.

Just before Thanksgiving, the Bulldogs will gear up for their major mid-season meet, the Nike Cup Invitational at the University of North Carolina.  The meet will be the first collegiate invitational format meet for the freshmen and will be an important opportunity to race against teams that the Bulldogs don’t usually get a chance to compete against.   It will be valuable preparation for end of season meets.

“The Nike Cup will give us a chance to evaluate where we are mid-season.  We will be looking for fast swims, but will also be gauging what needs to be done in the second half of the season to be at our best during the championship season,” said senior captain Emma Smith.

In January, the Bulldogs will compete against the remainder of their Ivy league competitors, starting with Cornell in San Juan, Puerto Rico, on Jan. 4, during the team’s annual training trip, and Penn and Dartmouth in a tri-meet on Jan. 9.

The regular season will wrap up with the annual showdown between Yale, Harvard and Princeton, which will be hosted over two days, Jan. 30-31, at Princeton this year.  The Bulldogs fought hard at the HYP meet last year and are looking to further improve upon their performances this season.