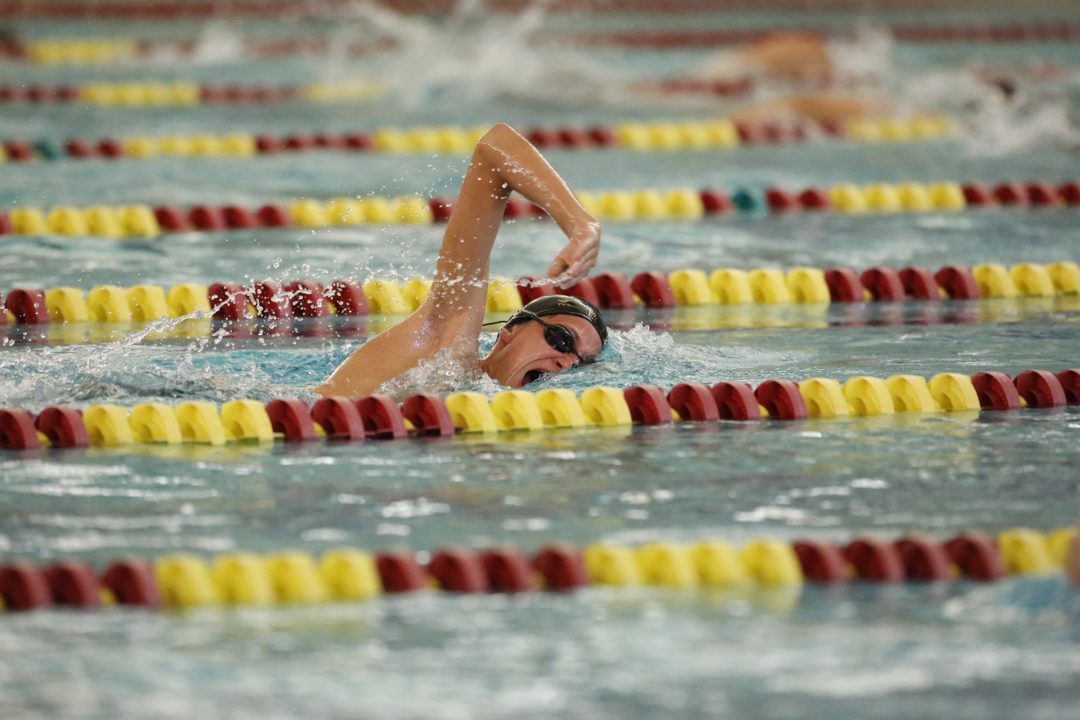 Denver's men won while their women fell short at their dual with host Wyoming. Stock photo via Denver Athletics

LARAMIE, Wyo. – Cowgirl swimming and diving won a thrilling dual over the Denver Pioneers, 150.5-149.5, while the Cowboys fell short against DU, 163-138, on Saturday at Laramie High School.

The Cowgirls won seven of the 16 events on the day. UW diving got the action started with crucial points in the women’s 3-meter event and the men’s 1-meter. Sophomore Karla Contreras placed first with a score of 301.05, while junior CeeJay Harris placed second with a 251.55 and junior Peyton GrandPre recorded a fourth-place score of 227.10. On the men’s side, junior Ryan Russiearned the top spot with a score of 222.00, just ahead of freshman Elijah Chan who placed second with a mark of 221.18.

The UW women earned back-to-back wins in the 200 freestyle and 100 backstroke. Senior Kelly Sheldon won the freestyle with a time of 1:54.43 while junior Samantha Burke clocked a 57.68 in the backstroke event. Burke followed up her performance with a victory in the 50 freestyle, touching the wall in 24.17. Contreras also earned her second win of the day on the 3-meter, scoring a 307.88. Harris and GrandPre completed the sweep with marks of 257.78 and 251.10, respectively.

Senior Maria Harutjunjan placed first in the 200 breaststroke, Wyoming’s last individual race victory of the day, clocking a time of 2:23.46. The final race would be the deciding factor, as the Cowgirls came out on top in the 400 freestyle relay with a time of 3:28.50. Senior Rachel McKivigan, junior Isobel Ryan, Sheldon, and freshman Hannah McLean-Leonard comprised the team. DU placed second and third, but the five-point swing gave UW the narrow victory.

“I thought our women’s team as a whole came out and fought really hard,” UW head coach Dave Denniston said. “This team competed with DU much more than last year so it’s encouraging to see the improvement. On our men’s side, our upperclassmen had a lot of great races. Wade Nelson, Kyle White, a newcomer Phil Musser. I’d like to see more energy from our team and attack our races better. Our divers winning all four events was really significant, especially Elijah Chan winning the 3-meter as a freshman.”

The Wyoming women will be back in action with a pair of duals next weekend, starting with New Mexico State on Friday. Action will begin in Las Cruces, N.M., at 4 p.m. MT. The following day, the Cowgirls will return to the pool in a clash with conference foe New Mexico starting at 12 p.m.

LARAMIE, Wyo. – The [RV/25] University of Denver men’s swimming and diving program earned a 25-point win in its dual opener over Wyoming on Saturday afternoon at Laramie High School.

“I really appreciated the efforts our team threw out there today,” head coach Brian Schrader said. “Our women’s team’s effort was a great reminder of how much fun swimming and diving can be, and I thought that they really fought hard for every point. The men performed well today, and deserved their win this afternoon.”

On the men’s side, sophomore Sid Farber (Portland, Ore.) was a part of four event wins for the Pioneers, winning the two sprint freestyle events, while anchoring both the 200 medley relay victory and the 400 free relay. Redshirt-freshman Stephen Calkins(Calgary, Alberta) and senior Anton Loncar (Hillsboro, Ore.) were both a part of three event wins, one individual and two relay wins.

Denver took the top three spots in the men’s 1000 free to open up an early cushion on Saturday. Sophomore Jesse Haraden (Ballston Spa, N.Y.) followed up his sister’s performance in the same event with a 9:53.04 to touch first. Senior Alex Walton(Atlanta, Ga.) and freshman Nathan Rock (Boulder, Colo.) touched second and third in the distance race with a 9:58.73 and 10:01.95, respectively.

Calkins individual event win came in the 200 free, clocking in at 1:40.07 in his first collegiate dual.

Senior Ray Bornman (Mackay, Queensland) and sophomore Neil Wachtler (Waco, Texas) tied in the 100 back with matching times of 51.52.

The Pioneer men didn’t win the 200 fly, but junior Kyle Ewoldt (Gilbert, Ariz.) and junior Graham Walker (Nairobi, Kenya) earned Denver points with second and third place finishes in the event, with times of 1:54.11 and 1:55.49, respectively.

Farber’s 20.06 in the 50 free was good for his second NCAA B Standard in the event in as many nights to lead the sprinters.

Freshman Aysia Leckie (Georgetown, Ontario) and senior Morgan Wice-Roslin (Colorado Springs, Colo.) scored for the Pioneers in the 100 free with second (52.70) and fourth (53.23) place finishes, respectively. Farber won the men’s event with a time of 45.17, while Bornman touched the wall in third with a 46.51.

In the women’s 100 fly, Bradley touched first to close out her individual events on Saturday with a 55.44, two spots ahead of Valette who touched the wall in 56.69. On the men’s side, Calkins closed out his individual event schedule with a second place finish in the 100 fly (50.36).

DU’s men’s 400 free relay quartet of Bornman, Calkins, Loncar and Farber finished the event with a two second win, combining for a 3:00.93.