Wu Peng Ends His Career on a High Note 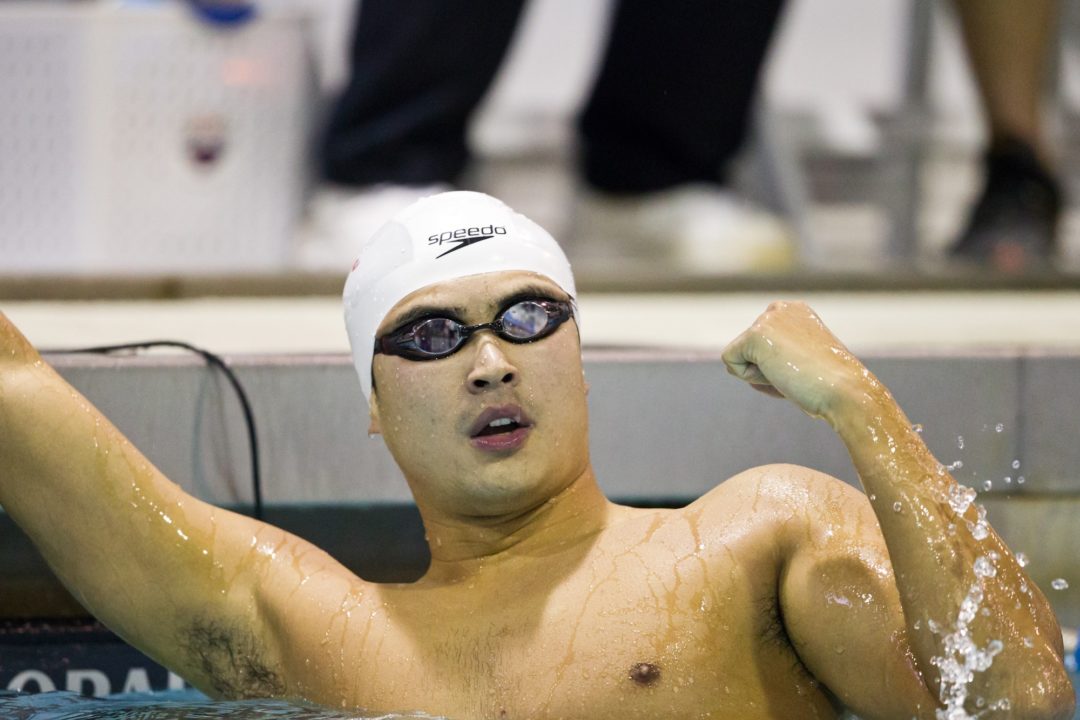 Wu Peng ended his career on a high note yesterday evening winning his fourth consecutive national title at the Chinese...

Since emerging on the international scene as a 15 year old winning gold in the 200 butterfly, 400 IM and 200 backstroke at the Asian Games in 2002 Wu has had great expectations placed upon. Leading into both the 2004 and 2008 Olympics he was seen by many as China’s greatest hope for a medal in men’s event.

At the 2008 Olympics in Beijing the country hoped that Wu would win a medal on home soil, but it was not to be. Wu ended up finishing tied for fourth with Moss Burmester of New Zealand.

It was at those games that he would post his fastest 200 butterfly time finishing in a time of 1:54.35 (a time he matched at the 2008 Chinese International a week after the Olympics) .

In 2009 Wu finished 12th at the World Championships in Rome. He was effected that year by an elbow injury, which he eventually had to undergo surgery for.

Wu, who trained under Zhu Zhigen, moved to Ann Arbour, Michigan in 2010 to train with coach Mike Bottom. A move which he found difficult at first but ultimately enjoyed, “It was difficult adjusting to life in the States initially,’ Wu told Time Out Shanghai in 2011. ‘But I’m comfortable in that environment now.”

‘The coaching is different, with more focus on the details – on dives and turns etc. But also the attitude is different. In China, everything is planned out for you, but in the States you’re a lot more personally responsible for your own schedule. It’s more relaxed.”

In 2011 Wu broke Michael Phelps 60 race winning streak in the 200 butterfly, a streak that spanned nine years. He beat Phelps at both the Michigan Grand Prix and Charlotte Ultraswim. Although many in the Chinese press overhyped these victories Wu kept the wins in perspective, “When I beat Phelps, I don’t think he was really taking those competitions too seriously,” Wu told Time Out Shanghai.

“Relatively, they’re quite small races so he wasn’t as focused as he would have been for something like the Olympics. The Olympics is still his main goal, so it’ll be a very different kind of race in London.”

After those races though he told Reuters that the success proved that his decision to move to the United States was a good one, “My overall performance has been good this year so that has reaffirmed some of the training that I have had in the United States.”

Heading into London Wu told NTD Television that the 2012 games would most likely be his last and that his goal was to stand on the podium, “The London Olympics might be the last time I participate in the Olympics Games. For the past two Olympics that I have participated in, I reached the finals. So I hope to improve on that in London and be amongst the medalists. So this is what I am aiming for.”

Unfortunately in London Wu fell short of qualifying for the finals finishing 11th after posting a time of 1:55.65 in the semi-finals.

Winning the 2013 national title in the 200 butterfly was the perfect way for Wu to end his career. He told many different media outlets that the win was a release and that even though he has had ups and downs over the years that his career was ultimately a successful one.

He also won Bronze in 200fly at Barcelona this year!