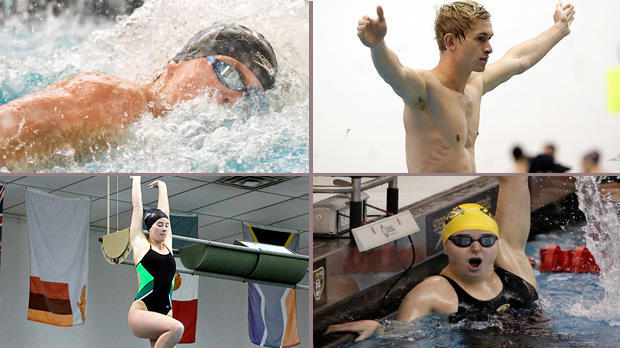 The Horizon League has announced Oakland’s Paul Huch as Men’s Swimmer of the Week and Wright State’s Mitch Godar as... Current photo via Horizon League

The Horizon League has announced Oakland’s Paul Huch as Men’s Swimmer of the Week and Wright State’s Mitch Godar as Men’s Diver of the Week.

This is the first Swimmer of the Week honor that Huch has received this season.

Wright State’s Mitch Godar won two diving events in the Raiders 151-143 victory over the Cleveland State Vikings. Godar’s first contest came in the 1 meter diving event where he scored 304.64 resulting in 1st/3. The juniors second win occurred in the 3 meter diving event again placing 1st/3 with a total of 247.72.

This is the first Diver of the Week honor that Godar has received this season.

Sara Bentley swam in seven events throughout the 2-day Flames Invite, finishing first in four of them. Her time of 56.05 was a personal best in the 100 backstroke event placing her first amongst 16. The junior also managed to finish n first with a 57.16 finish in the 100 fly, topping 18 total swimming. Additionally, Bentley helped win the 200 free and the 200 medley relays and registered strong runner-up results in the 400 medly relay as well as the 200 IM. Bentley still managed to finished amongst the top three in the 200 back with a time of 2:04.20, placing 3rd/18.

This is the first Swimmer of the Week honor Bentley has received this season.

Fleckner competed in two diving events this weekend, finishing first in each. The senior finished 1st/3 at Wright State’s Natatorium 1-meter diving event and the 3-meter diving event with scores of 271.50 and 289.42. Fleckner was the only Raider to participate in both diving events and as a result she was able to collect 18 points to help WSU defeat Cleveland State, 160-133.

This is the first Diver of the Week honor that Fleckner has received this season.