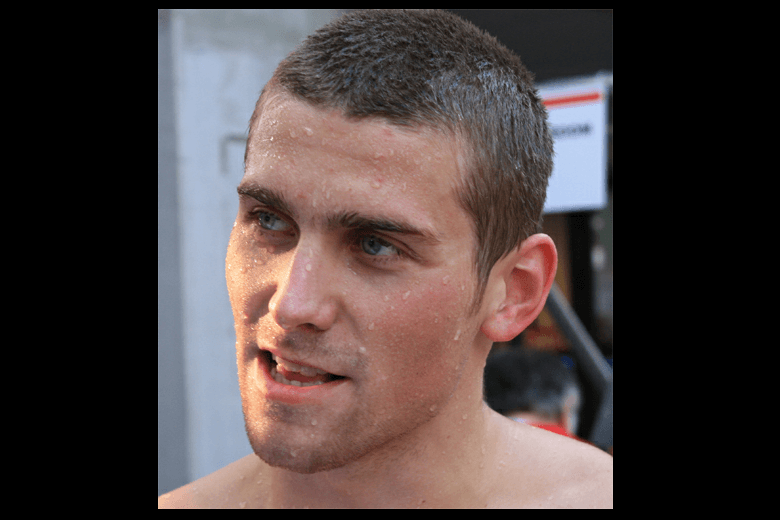 Olivia Smoliga of the United States qualified second in a new national record time of 26.75 surpassing the previous record time of 27.08 set by Natalie Coughlin in 2002.

Qualifying third was Rachel Goh of Australia in a time of 26.86. Early this Goh won the 50 backstroke on the World Cup circuit six times and came into the competition with the fastest time in the world having swum a 26.66.

“I went into the race relaxed. After a few strokes I saw the others were behind, so I kept a rhythm that I felt comfortable with, without getting too tired,” said Dotto

“In the final we should be are pretty much at the same level, apart from Vladimir MOROZOV (RUS) who is in front of everyone else. From the silver downwards it’s everyone’s race. I think I have the chances (to win a medal).”

Vladimir Morozov who earlier in the meet set a new World Championships record leading off the 4 x 100 freestyle relay in a time of 45.52 qualified fourth in a time of 47.58.

American Ryan Lochte who set the world record in the 200 IM last night qualified first in the 100 IM in a time of 51.75.

After the race Lochte expressed his feelings on how his fans have affected his career, “They have supported me through my entire swimming career. Through the good times and the bad times they have always been behind me.”

European Champion and Olympic silver medalist Aleksandra Herasimenia of Belarus qualified first in the 50 freestyle with a time of 24.27. Herasimenia came into the competition with the fastest time in the world having swum 23.85 at the European Championships.

“For the morning, it’s OK. I swam fast, but I have a little bit left,” said Herasimenia.

Her goal for the meet is simple, “Just the gold. I don’t even think about another medal. Of course anybody can win it, but I’ll try my best to grab it.”

“I feel good. After the Olympics (London 2012 Olympic Games, where she won silver in the 50m freestyle and the 100m freestyle) I swam but not too hard. It’s not that I am not prepared for this meet, but I didn’t prepared too hard. I prepared for myself, taking it easy.”

Shiwen Ye of China qualified second posting a time of 2:08.09.

“I swam a decent race, but I feel a bit tired. My body energy is a little low,” said Ye.

“In the final I will do my best to be first, although (Katinka) HOSSZU (HUN) is really strong.”

Hungarian Zsuzanna Jakabos qualified third in a time of 2:08.48.

The races will be very close.

Tough triple for Ryan Lochte tomorrow. He will have the 200 back final, the 100 IM final and probably the 4X100 medley relay final on freestyle.

Lochte might finish these championships with 8 medals , which is absolutely stunning ! His 100 IM today ( weird that he was entered in a very slow heat !!! ) was fantasticly easy . He can beat the world record tomorrow but 3 races in one day seeeeeems a lot .

Why did Hardy scratch 50 free and Romano the 200 back? They are screwing two other girls from an opportunity to represent the USA in World Championships!! If they can’t handle the order of events then they and their coaches should look at the order of events ahead of time and pass on those events….Dwyer and Lochte did that!
I would be really mad if I was one of the swimmers that was not given a chance to go to Worlds!!

Very well noticed !!! really not nice behavior from those EXPERIENCED swimmers . So many young swimmers wanted to benefit of the chance to compete at higher world level here .

Lochte scratched the 50 fly at this meet, so it is not like he wasn’t guilty.

Lochte did scratche the 50 fly but that doesn’t deter someone else from making the team since the USA only picks 50 stroke people from swimmers already on the roster. So he just detered someone from having another event…bad, but not as bad as shutting out some new person.

Olivia Smoligia could have put a decent 50 free together, so they wouldnt have even needed to bring an extra swimmer…i agree..not cool.

They just can’t substitute someone at last minute and they should only put the person in that qualified last summer. Kara Lynn Joyce backed out early this fall and that is why Christine Mags got to swim it.