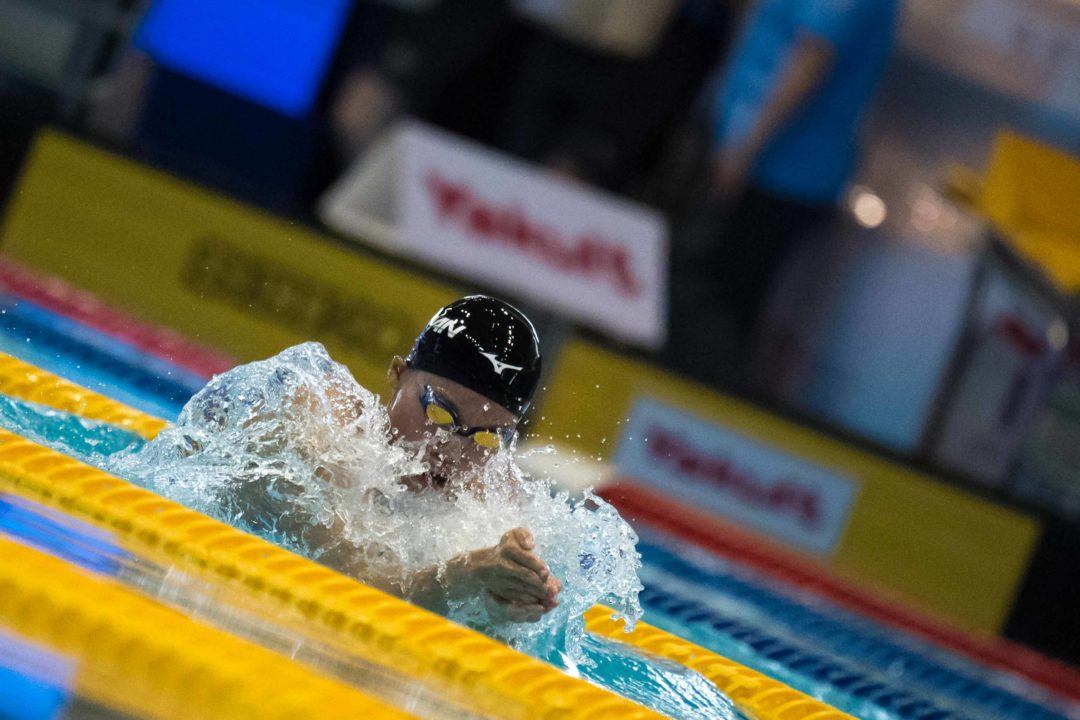 Stopping the clock at 1:55.24, the ANA athlete took the win by almost a second and a half ahead of the rest of the field. Seto’s outing tonight now overtakes teammate Nao Horomura’s 1:55.90 from last week as the 3rd fastest mark in the world this season and the fastest of all Asian swimmers thus far.

The female MVP honor was reaped by Yui Ohashi, who doubled up on her 400m IM victory last night with a 200m IM gold this evening. Putting down a solid time of 2:09.91, Ohashi told local media that she felt ‘really tired’, but was happy to be able to still produce a sub-2:10 effort.

Ohashi’s season-best remains at the 2:09.14 world-leading time she established at the Hamamatsu Long Course Championships in January.

Freestyle ace Katsumi Nakamura was back to his speedy ways, clinching the 100m freestyle gold tonight in a time of 48.78. The 24-year-old fired off his reigning national record time of 47.87 at this same meet in 2018, but his sub-49 mark tonight is still a solid performance for this point in the season.

Nakamura’s time of 48.12 clocked at the Kirara Cup earlier this month remains as the 2nd fastest time in the world this season, only behind Russian Kliment Kolesnikov’s #1 48.04.

Shinri Shioura, who took a break from the Short Course World Championships to look after his tonsillities, was also under 49 seconds tonight in a speedy 48.96, good enough for 9th in the world.

Suzuka Hasegawa lowered her 200m fly season-best by a few tenths, winning tonight’s race in 2:08.32. The Nihon University athlete was ranked 4th in the world with her time of 2:08.51 from last October, but now ties teammate Miyu Nakano as the 4th fastest. Both outings were quicker than the 2:08.80 the 19-year-old Olympian mustered for bronze at the 2018 Asian Games (2:08.80).

23-year-old Yukina Hirayama busted out a new meet record in the women’s 50m fly, earning gold this evening in 26.37. That sliced .19 off of the previous meet record held by 18-year-old Rikako Ikee, who is taking time away from swimming in order to address her shocking leukemia diagnosis.

For Hirayama, her time tonight checks-in among the top 10 performances in the world this season and also represents her best time ever in the event.

The men’s champion in the same sprint event was 27-year-old Kengo Ida, who topped the podium with a time of 23.84 to represent the only man of the 50m fly field under 24 seconds.

Tomomi Aoki clocked a 54.94 time in the 100m free to come within half a second of what she produced at the 2018 Asian Games. In Jakarta last year, Aoki cranked out a mark of 54.58 for a heartbreaking 4th place, but tonight was less than .4 off of that time to take the Konami Cup title.

Heads were definitely turned when Reona Aoki blasted a monster 1:06.86 100m breaststroke effort in the next event tonight. Entering this meet, Aoki’s season-best rested at the 1:07.18 produced at last month’s Hamamatsu LC Championships, but the 23-year-old took things sub-1:07 tonight to pound out the new world #1 mark.

At the 2018 Asian Games, Aoki logged a swift 1:06.45 for silver, but her effort this evening would have been good enough for bronze in that same race.

Finally tonight, Chihiro Igarashi fired off a new meet record in the women’s 400m free with her gold medal-garnering time of 4:08.83. That’s enough to enter the world rankings as #9, as well as represent Igarashi’s 4th fastest personal performance ever.

After scratching last night’s finals, Olympic champion Kosuke Hagino dropped today’s competition, instead visiting the hospital, where he was reportedly discharged without any major incident.

Re the women’s 200 fly rankings, Hasegawa did 2:08.26 at the same meet on 21 Nov. where Hentke and Ohashi did their times shown there.

Also, Tomomi and Reona Aoki are not sisters (they were born four months apart), and probably not related at all. Aoki is a very common Japanese surname.