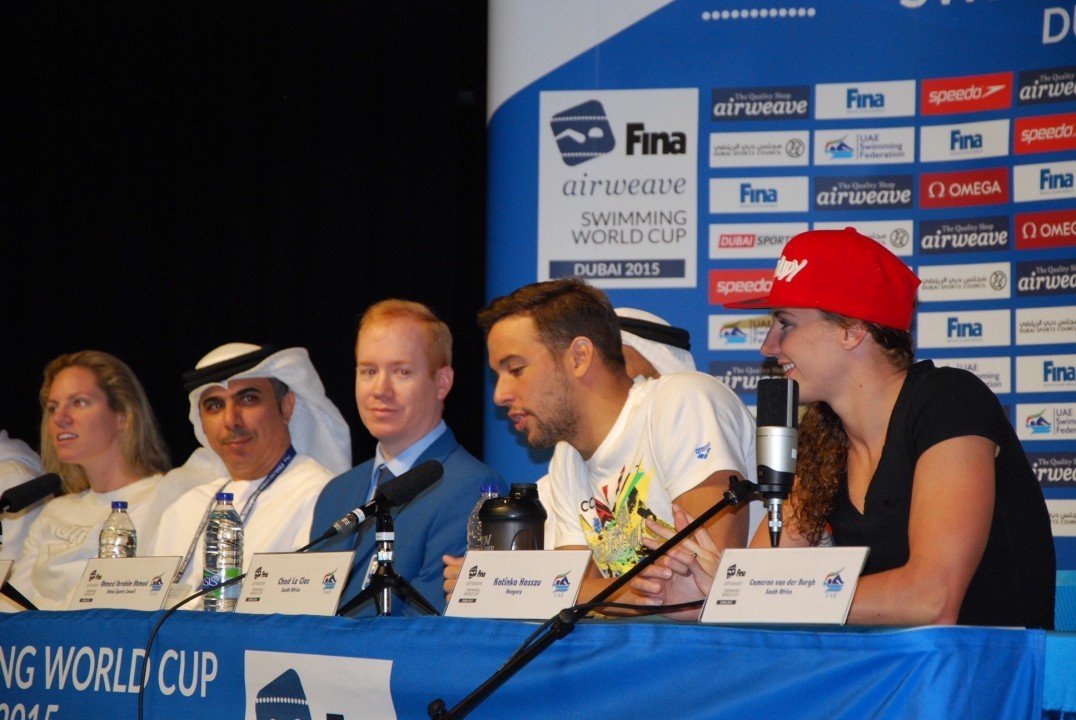 Today the opening press conference was held in Dubai for the FINA/airweave World Cup. Current photo via Daniela Kapser

Today the opening press conference was held in Dubai for the FINA/airweave World Cup. For this year’s press conference the organizers chose a local school – the GEMS Wellington Academy in Silicon Oasis which offers a great sports programme for their students. According to their website they have, among other sports facilities, three 25 m pools, each with six lanes. The press conference took place in the school’s impressive 650 seats professional auditorium.

Sarah Marks, the moderator and organizer of the press conference, first asked THE question of the questions to the five swim stars Katinka Hosszu (Hungary), Emily Seebohm (Australia), Chad Le Clos (South Africa), Cameron van der Burgh (South Africa) and Mitch Larkin (Australia): „What  do you think about this  year’s World Cup transition from a short to a long course competition?“ While Emily Seebohm is absolutely fine with it, Katinka Hosszu replied that short course racing is a very fast competition and that she still prefers that format for the World Cup. She thinks it is more interesting for the audience – also because always multiple world records have been set at SC World Cups. For her, short course racing is very competitive and she will appreciate further World Cups again in a 25 m pool.

Also the 7-17 year old students showed up with a lot of swimming knowledge: „Chad, how did you manage to beat Michael Phelps at the London Olympic Games?“ Le Clos emphasized  that Phelps is the most successfull swimmer of all time but with hard work and a strong self-confidence it is even possible to beat a legendary athlete. Before Emily Seebohm decided to start seriously as a competitive swimmer at the age of 10, she „hated swimming“. Her mother has been a swim teacher and instructed Emily and her three brothers. Emily said, it took some time until she loves the sport. Now she enjoys travelling around the world and competing against the world’s best swimmers. In contrary, Katinka was a „water baby“ from a very early age on. She said, she now has been swimming for 23 years and her grandfather taught her to swim. Another important issue for the well prepared young audience were  the pre-racing rituals of the top athletes: „I never listen to music before a race because I want to focus only on this special race.“ explained Mitch Larkin his pre-race preparation. Katinka loves rap music but music is not a fixed part for her before a race. Cameron van der Burgh added: „Sometimes I listen to music, sometimes I just try to relax.“

It will be interesting to see how Cameron will handle his races against Adam Peaty over the next two days. Cameron could became the first male athlete who ever won the same two events at all World Cup meets in one year – the 50 m and 100 m breaststroke.

On Saturday, at the end of the final World Cup session, the overall winners will be awarded. On the women’s side, Katinka Hosszu leads with 570 points in front of Emily Seebohm with 381 points. On the men’ side, Cameron van der Burgh has 327 points. Chad le Clos, last year’s overall winner, did not participate in the 2nd cluster but now he is back in the third one – but with 129 total points so far he has no chance to win, he is third at the moment behind Australia’s Mitch Larkin.

In the official press release, the organizers announced that „In the afternoon a Children’s Swimming gala will be held for local swimmers, before the finals at 6 pm. The schedule is repeated on Saturday. Competitions will also be held throughout the event to win great Speedo prizes. Fans who come dressed to support their country will be in with the chance for a prize, and those who guess the correct number of goggles in the case at the Speedo stand can also take home a fantastic prize.“

Photos from the press conference, courtesy of Daniela Kapser:

I’m surprised Mitch was included.. He is still a pretty new ‘star’ to me

Yes but since he has transformed, he can break the 100 back world record every time he’s in the water.

Hosszu probably resents the LC cups because she can make more money in short course. Odds are she would have at least $20k more from WR bonuses alone at this point. She is also more versatile and dominant in short course, so that would add a few more thousand each meet. Going to the big-pool format this year may end up costing her $40,000. Also- I’ve said this before, but I’ll suggest it again: I think in odd-number years (2015, 2017 etc) the World Cup should be long course. In even years it should be short course. This allows the two disciplines to both be contested, giving a more total and spread out picture of top level swimming. I would… Read more »